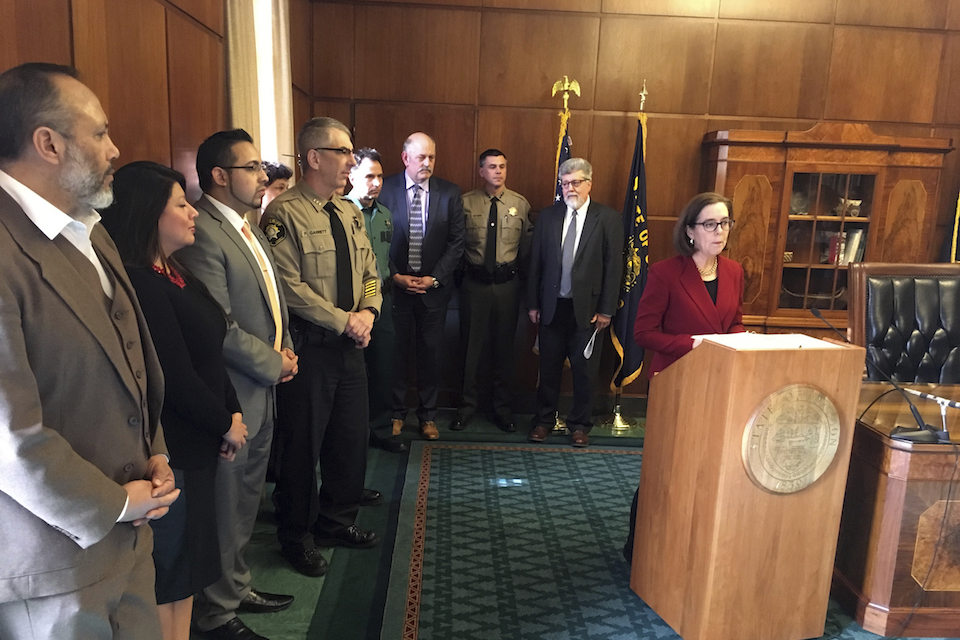 But critics say hate groups are funding the effort to abolish the law, and allege paid signature-gatherers deceived voters during a canvassing push earlier this year.

State law enforcement authorities have opened at least one investigation into the signature-gatherers, and opponents have filed a complaint questioning whether the behavior was part of a coordinated effort to mislead voters.

Representatives for the group behind the petition, the Repeal Oregon Sanctuary Law Committee, did not respond to calls or emails seeking comment.

Trump last month gathered officials opposed to a California sanctuary law at a Washington, D.C., event where he gained attention for referring to violent gang members who enter the country illegally as "animals."

Like California, Oregon has a sanctuary law that covers the entire state, the first of its kind and one of only a handful of similarly broad laws in the nation.

With help from anti-sanctuary groups, a trio of Republican state legislators from rural parts of the state sponsored an initiative to repeal Oregon's law.

The secretary of state's office confirmed nine complaints about alleged deceptive practices by initiative signature-gatherers have been forwarded to Oregon's Justice Department for criminal investigation.

State elections staff also estimated about 40 people called seeking to have their signatures removed from the petition.

Many of the complaints date to late February, but Kristina Edmunson, the Justice Department's communications head, said the agency has since received a second round of complaints. Edmunson wouldn't comment on whether that prompted additional investigations.

Portland resident Erin Whitlock was among those who complained.

Whitlock told The Associated Press she was approached on a commuter train by a canvasser who described the measure to passengers as extending protections for immigrants in the country illegally — which she knew to be the opposite of its actual effect.

"Everything felt a little fishy," said Whitlock, who added the canvasser would not show her a copy of the petition. Oregon canvassers are required to carry copies.

In another case, a video featured in media reports appeared to show a canvasser reacting with surprise when told the effect of the initiative.

Lee Vasche, owner of the signature-gathering company named in the complaint, said he hadn't heard of a complaint like Whitlock's but acknowledged complaints about misrepresentation in general.

Most were the fault of one signature-gatherer, Vasche said, adding the company fired two other circulators and destroyed about 400 signatures.

"We owned up to that, destroyed them, and moved on," Vasche said.

But a group opposing the initiative has filed a separate official complaint over the episodes, asking the Justice Department to investigate whether they amount to election racketeering.

In their complaint, attorneys for advocate group Our Oregon cite the similarity of the complaints.

"It is difficult to imagine a scenario" where Vasche didn't know what was happening, the complaint reads.

Vasche denied the allegation, and said he also responded to the complaints by adding training.

The group gathered about 20,000 signatures but stopped working on the petition at the beginning of March, said Vasche, citing hostility to the proposal in metro areas and a boycott of his company, which does other political work.

The repeal group's funding has also drawn scrutiny. According to state records, nearly all of the roughly $131,000 raised by the committee behind the initiative came from a pair of groups: Oregonians for Immigration Reform and the Federation for American Immigration Reform.

Each gave about $60,000 to the repeal effort. Both are classified as hate groups by the Southern Poverty Law Center.

In an email, Heidi Beirich, head of the Southern Poverty Law Center's Intelligence Project, said the Oregon group's classification was based on coordination between it and prominent national anti-immigrant groups, along with "racist statements" by its leaders. Beirich oversees the group's yearly survey of extremist groups.

Debra Royal, a spokeswoman for Oregon's secretary of state, said election authorities aren't investigating the group directly attached to the initiative. But she said she couldn't verify the scope of the Justice Department's probe.

The measure's sponsors must gather roughly 88,000 signatures by July 6 to qualify for the ballot.

Oregon's 1987 sanctuary law grew out of an episode in the town of Independence, where officers singled out a group of Latino men in a restaurant and aggressively interrogated them about their citizenship status.

The law prohibits state agencies from enquiring about a person's immigration status if they haven't committed another crime, or coordinating with ICE raids or roundups in the state.