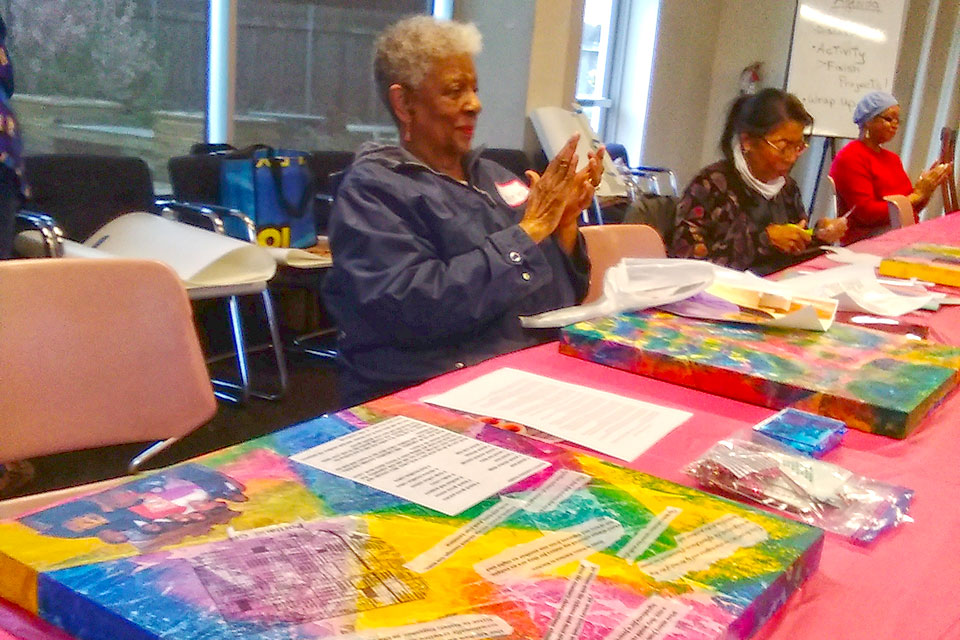 “I’m not artistic at all,” said Shirley Minor, one of 15 African American seniors who participated in PreSERVE’s six-week “Art and Soul Food” program last winter.

Using various techniques such as collaging, painting and stenciling, the participants created a work of visual art around Black heritage, family food, and childhood memory.

To create their work of art, each person brought in a photograph, a map of their place of origin, and a family recipe. Minor, who works part-time for the state of Oregon’s employment department, used a recipe for corn soufflé – a meal her mother used to make in Louisiana.

As the weeks progressed, Minor said she felt more confident in her artistic abilities. “I really started enjoying myself,” Minor told The Skanner. “It was a way to help you relax, and my fellow artists were wonderful to be around.”

To help draw out the inner artist in each participant, the program – which was funded by the Regional Arts and Culture Council – used a number of trained facilitators and art therapists.

“We pride ourselves when we start each program on creating a culture of trust and inclusion,” said Amy Henderson, executive director of Geezer Gallery, which offered the program in partnership with PreSERVE.

“It allows people to be vulnerable both in their story and in trying new things.”

As a coalition of nonprofits and health institutions, PreSERVE promotes healthy living of African Americans over the age of 50 – focusing on all areas, from a low-fat diet and exercise to socialization and the expressive arts.

Before launching PreSERVE in 2011, Linda Boise was the education director of OHSU’s Layton Aging & Alzheimer's Disease Center. While at OHSU, she recognized the lack of African American participates in the program and decided to go straight to the source.

After meeting with several members of the Black community, along with health professionals and nonprofits, Boise organized a series of conferences called “Aging and Memory in the African American Community,” from which PreSERVE blossomed.

“There has been a lot of discussion, for example by the Alzheimer’s Association and other researchers, that suggests that African Americans have a high prevalence of Alzheimer’s disease,” said Boise.

Although not a biological researcher herself, Boise said she doesn’t necessarily believe the prevalence statistic. Rather, she thinks there might be a higher incidence of cognitive impairment and dementia – not exactly Alzheimer’s – in African Americans.

What Boise finds particularly interesting is the link between the Black population and vascular dementia, which can be caused by high blood pressure and excessive gain weight.

So for PreSERVE, it was important that the “Art and Soul Food” program promote both healthy living and healthy brains.

Traditionally, soul food is characteristic of being high in fat, calories, and sodium. And with that, health professionals have seen a rise in diabetes and kidney disease in the African American community.

What the “Art and Soul Food” program did was help participants put a healthy twist on the recipes, so that the cultural identity of the food was retained, while being modernized into a health-conscious meal.

The act of creating art, too, has been shown to improve physical and mental well-being.

“Seniors who participate in the arts have less falls, they take few medications, and they have lower blood pressure,” said Henderson, whose Geezer Gallery supports elderly artists and offers therapeutic arts programs to low-income seniors.

“But it’s not only about doing art and being creative,” continued Henderson.

“It’s also about bringing people together who are largely isolated, which has a significant impact on their health. It lowers depression and anxiety and improves quality of life.”

Edline Francois works as a coordinator for an OHSU study which looks at the impact physical and social activity has on mitigating the progression of Alzheimer’s in African Americans. Partnering with PreSERVE, she helped organize, recruit and facilitate the program, which she called “another branch of cognitive health.”

Similar to her work at OHSU, Francois said “Art and Soul Food” functioned as a type of intervention to see how the creative arts can be used to alleviate dementia and memory loss in older African Americans.

As the only member of her family born the United States, Francois also participated in the artmaking by borrowing an Epis recipe – a traditional seasoning base – from her Haitian roots.

“When you’re doing this kind of work, you don’t realize how much honor and privilege you have when stepping into such a sacred space of American African family history,” said Francois.

“I was able to step into one particular participant’s life for a little bit, and not only help her make her art, but I was seeing pictures from the 1940s to the 1970s. Each photo and recipe has a story, and it speaks to the individuality of each participant.”

In celebration, the artwork from the “Art and Soul Food” program will be showcased on Saturday, June 9 at the June Key Delta Center (5940 N Albina Ave. Portland, OR 97218), from 1:30 to 3:30 p.m. Samples of the “soul-turned-health food” will be prepared by the artists and served alongside light refreshments.