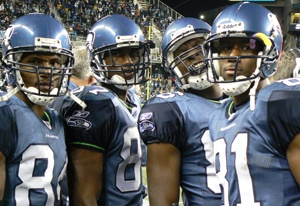 In front of a record crowd of 68,331, the Seattle Seahawks shutout the San Francisco 49ers in front of a nationally televised audience on "Monday Night Football" at Qwest Field.
The Seahawks are now 5-4 and led the NFC West by one game ahead of the Arizona Cardinals with the 24-0 win over the 49ers.
Coach Mike Holmgren said earlier in the week he intended to focus on the passing game since the running game has sputtered. The Seahawks started the game passing on 11 of 13 plays for 83 yards.
"Anytime you get a shutout in this league it's really something, it means your defense played very well and I wanna give credit to our defense, they had a good game," Holmgren said.
Hasselbeck completed the game with 27 of 40 passes for 278 yards and two touchdowns including a 1-yard touchdown pass to tight end Will Heller in the first quarter and a 10-yard touchdown pass in the fourth quarter to wide receiver D.J. Hackett. Hackett caught eight passes for 101 yards. Wide receivers Bobby Engram and Nate Burleson each had four passes, Engram for 53 yards and Burleson for 51. When the night was over, eight receivers had caught passes from Hasselbeck.
"We were able to pressure the quarterback which you have to do. I was pleased with how the defense played, the offense played a little bit better tonight and on special teams we have some work to do," Holmgren said.
Two special team penalties, a false start against Chris Spencer and holding call on Heller, potentially cost Josh Brown a pair of field goals in the first half that could have extended Seattle's lead.
"It would have been nice to have given Josh those six points to put on the board, he may be a little upset so we feel bad for that," said middle linebacker Lofa Tatupu. "Otherwise, the offense did a great job of moving the ball and it was just a fun day out there."
After the Spencer penalty, Brown kicked wide-left on a 54-yard field goal attempt, the second miss of the season of 19 attempts.
The defense swarmed the 49ers and nickelback Jordan Babineaux flew around untouched and sacked 49ers quarterback Alex Smith forcing a fumble recovered by defensive end Darryl Tapp.
"It was my first sack so I'm happy about that," Babineaux said. "I was just thinking, I hope (Smith) doesn't throw the ball. I was full speed ahead and there was no hesitation."
Defensive end Patrick Kerney also got a sack and forced a fumble that was recovered by defensive tackle Rocky Bernard. Subbing for injured Leroy Hill, veteran linebacker Kevin Bentley stepped up finished with a team-high 10 tackles and six solo stops.
"Bentley played a tremendous game," Tatupu said. "Everytime I looked on the replay he was on the tackle, making the most of his opportunity and its great to have good depth like that when were missing Leroy."
The Seahawks held the 49ers offense to just 173 yards and tied their team record for the fewest first downs allowed which was set in 1987 against San Diego. The Seahawks had 17 first downs before the 49ers got their first on the last play before halftime and for the second time this year, the 49ers tied their fewest first downs since 1963.
Running back Maurice Morris, filling in for an injured Shaun Alexander, rushed for 87 yards on 28 carries and completed one 6-yard touchdown run, the only third rushing touchdown of the season.
"The o-line (offense) did a great job tonight of opening things up and I just had to get in and hit it," Morris said.
The Seahawks face the Chicago Bears (4-5) Sunday afternoon at Qwest Field.