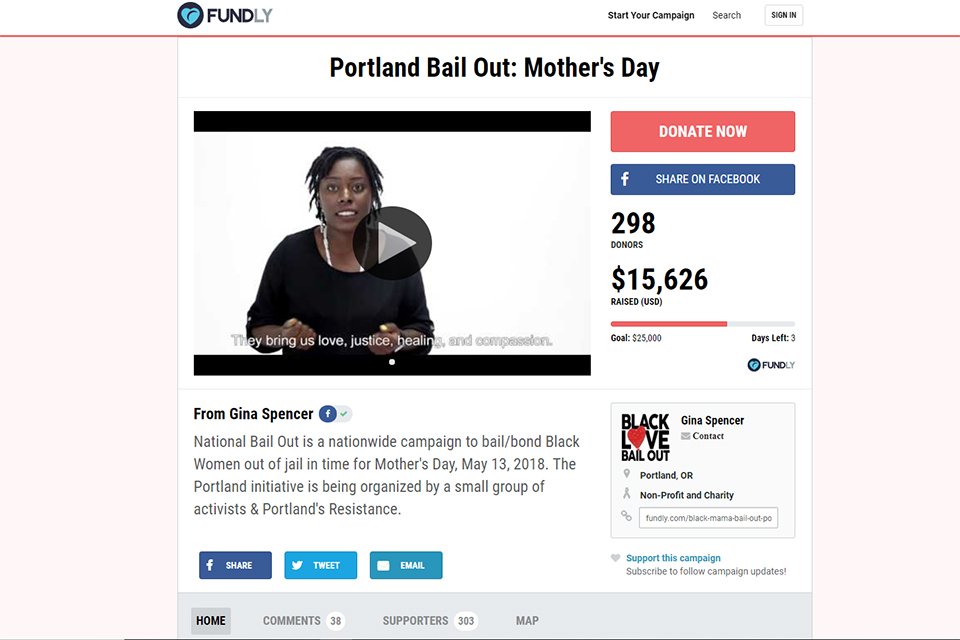 By Christen McCurdy | The Skanner News
Published: 10 May 2018

Portland-area activists are raising money to bail Black mothers out of jail this weekend so they can be reunited with their children for Mother’s Day.

A fundraising site that was posted Monday had raised more than $15,000 toward a $25,000 goal by Thursday morning.

The fundraiser is part of a movement called the National Bail Out, conceived by Mary Hooks of the Atlanta-based organizing group Southerners on New Ground. The idea behind it is twofold: first, to raise funds to post bail for individuals currently in jail, and to draw scrutiny to the cash bail system, hopefully bringing about its end.

The Portland-area campaign was sparked by Gina Spencer, a nurse practitioner who moved to the Portland area last year from Philadelphia, where she had contributed to a Mother’s Day bailout campaign previously. She reached out to local activist groups to find out if something similar was happening in the Portland area this year for Mother’s Day, and when she found out there wasn’t, she worked with Portland’s Resistance to start a local campaign.

Organizers have been in contact with the public defender’s office and have reviewed the Multnomah County Sheriff’s Office rolls to generate a list of eligible women, and plan to go downtown on Friday and post bail to reunite them with their families. Average bails in Multnomah County hover around $5,000, and the group has set a target of $25,000 so they can help free five women for the weekend.

Spencer noted that organizers considered a bailout campaign for Clark County, but bail amounts there tend to be much higher – but she hopes to organize a Clark County fundraiser in the future. She noted the National Bail Out website has a tool kit that allows people anywhere to create bailout campaigns in their communities.

Women in general are the fastest-growing population of people in jails and prisons, and Black women are disproportionately represented in correctional facilities nationwide: in Multnomah County, Black people represent 27 percent of people in prisons and jails and six percent of the population.

Spencer said participating in the Philadelphia helped shine a light on the inequity inherent in the money bail system, which she said unfairly penalizes poor people in jail.

“If a judge has deemed that you can be released and you are able to be part of society, money should not be the thing that keeps you from doing that,” Spencer said.

According to a press release from Portland’s Resistance announcing the fundraising campaign, organizers are planning another bailout in June for Juneteenth and Father’s Day. Any funds raised that exceeds this week’s need – including bail amounts that may be returned at women’s court dates in some circumstances -- will be rolled over to that campaign.