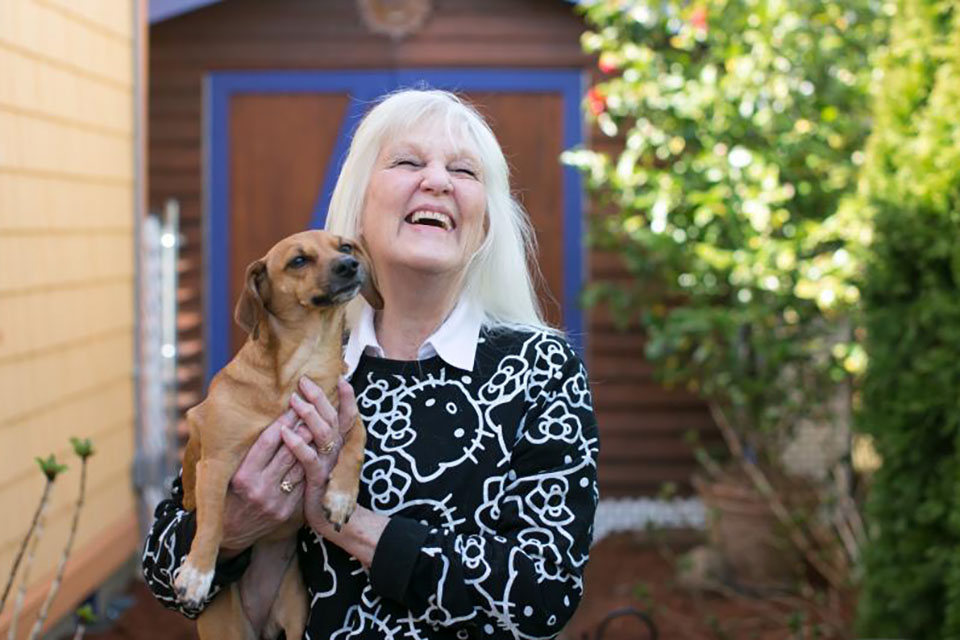 For 67-year-old Sharon Newell, the prospect of living a safe and healthy life in Portland was wearing thin.

In April 2017, she relocated from Springfield to Portland to be closer to her doctors, who treat her for multiple sclerosis. Due to her illness, she’s unable to work. And even with her monthly social security check for $800, Newell struggled to find a place she could afford, bouncing from rooms to even garages.

“It was a fight that last year just to be here. It was very, very bad,” Newell told The Skanner.

In January, however, her life took a positive turn. Newell was selected as one of 45 recipients of a new local program called Long-Term Rent Assistance. Initiated by the senior assistance organization, Northwest Pilot Project, the program works by providing monthly rent subsidies to senior citizens with the very lowest income.

Newell is now living in a duplex in East Portland. At just over 600 square feet, the apartment costs $1,350 a month – a price she never could have afforded. But through her rent voucher, she pays only $129. With stabilized housing, her health is improving too.

“The doctors are telling me it will take up to six months to improve, with just not having to worry anymore,” said Newell. “It’s a wonderful place and I am getting better day by day.”

Nationally, Housing Choice Vouchers – a program of the U.S. Department of Housing and Urban Development – have been slashed by 30 percent since 1994. Also referred to as “Section 8” vouchers (due to an amendment in the US Housing Act), they offer low-income individuals a permanent rent subsidy.

But the demand in recent years has stretched the dwindling supply into a shortfall. In Multnomah County, the waiting list for Section 8 vouchers closed in September 2016.

For low income seniors, their reality grows more vulnerable each year. In Portland, soaring rents have contributed to the number of people over the age of 55 that are experiencing homelessness in the county. According to its biennial Point in Time count, 816 seniors were counted as homeless in 2017. That demographic is rising faster than the number of people experiencing homelessness overall.

The underlying culprit is that rents have far outpaced the low incomes of seniors. If the cost of rent or food increases just slightly – coupled with the loss of a job or a spouse, or even a medical condition – they could be at risk of living in a shelter or even on the streets.

According to NWPP, “only one in four eligible households secure a housing choice voucher nationally, leaving many of our low-income neighbors and community members without the financial means to cover the cost of housing.”

Housing advocate Bobby Weinstock, with NWPP, had been germinating an idea for a local voucher for well over a decade. And together with executive director Laura Golino de Lovato, they set out to create their own funding stream, completely independent of federal aid.

With the help of local housing authority Home Forward, as well as $350,000 from the Joint Office of Homeless Services (funded by Multnomah County and the City of Portland), and an additional $150,000 from Meyer Memorial Trust, the Long-Term Rent Assistance Program was born.

Since Feb. 1, the program has provided monthly rent vouchers to 35 seniors – seven of whom were homeless. On average, the vouchers provide $700 towards keeping their rents permanently affordable. The additional 10 seniors will be receiving subsidies in the coming months – five of which are in a partnership with Care Oregon.

To determine who was eligible for a voucher, NWPP turned to their existing pool of clients, all of whom have incomes from zero to 30 percent of the median family income.

“For this program, we looked at the people who have the lowest of that group, including those who have no income,” Golino de Lovato told The Skanner.

Her organization then reviewed the level of vulnerability of this subset, taking into account disabilities, chronic medical conditions, seniors over 80 years of age, and those who spend over 70 percent of their monthly income on rent.

“This new program would be the only resource they have to stabilize their housing and prevent them from becoming homeless,” Golino de Lovato said of the voucher recipients.

Over the next few years, NWPP and its partners are looking for resources to increase recipients from 45 to eventually 45,000.

“We’re starting with the low-income seniors that we serve, but our vision is that it would be for any low-income person or family who has no other option,” said Golino de Lovato.

For Sharon Newell, the rent assistance was a savior. “My doctors said I wouldn’t have been here if I hadn’t found a place. This has really changed by life.”