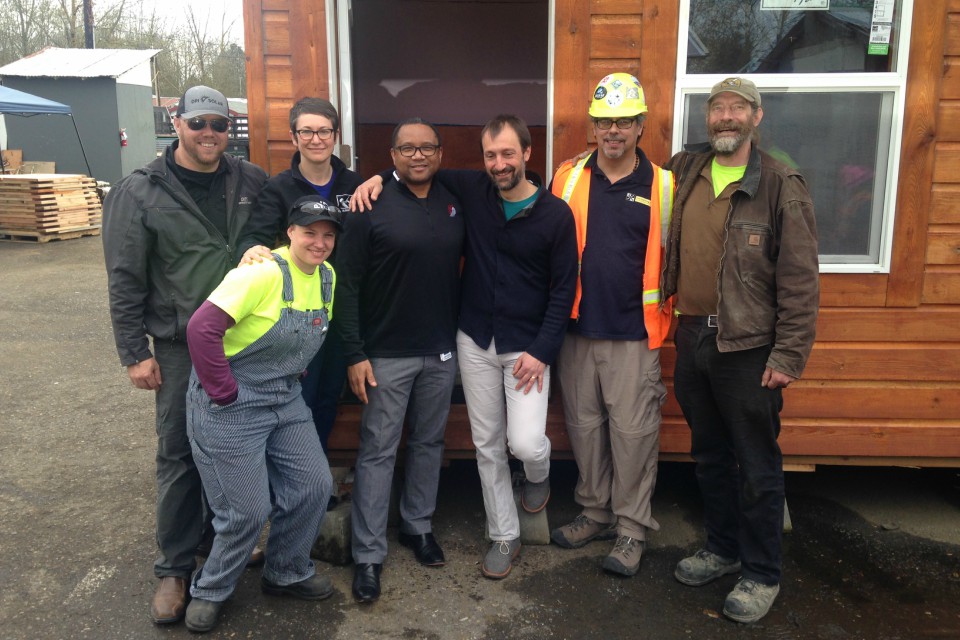 A collaborative project between the ReBuilding Center, DPI Solar and the Portland Trail Blazers, as well as a handful of trades training organizations, the tiny homes are the newest addition to a long-term plan to improve and innovate the older structures at Dignity Village.

Established in 2000, the houseless community is one of Portland’s oldest camps and is currently home to 53 residents. As a self-governing entity, it seeks to “create a green, sustainable urban village for those who are seeking shelter but are unable to find it,” according to its online mission.

Now, village residents have the opportunity to participate in a project at the forefront of sustainable “tiny house” construction. The 8-by-14-foot structures are fully insulated, solar-power generating, and use weather-resistant cedar and salvaged materials – one-third of which was donated by the ReBuilding Center, a nonprofit store that offers used and salvaged building materials. The center has also worked with other homeless communities in the Portland area, including Hazelnut Grove, Right to Dream Too and the Kenton Women’s Village.

Funded primarily by the Portland Trail Blazers, the budget for the tiny houses reached roughly $20,000. John Goodwin, premium services manager with the Blazers, ultimately got the project off the ground.

Over the years, his team has been volunteering for a number of social service organizations, including New Avenues for Youth and the Blanchet House. For the Dignity Village project, he wanted to do something bigger, so he called in the partners.

“We’re very lucky to be in the position we’re in, and we know some people aren’t as lucky.

"And because they aren’t, we know we need to assist them,” said Goodwin, who grow up volunteering alongside his mother for Habitat for Humanity in North Carolina. “I work with a lot of millennials and younger people, so this is an opportunity for them to see that there’s another side to the way people live in our community, and it gives them an opportunity to assist with that.”

Beginning in July 2017, the four tiny houses were constructed on site with the help of trade trainers Portland Youth Builders, Constructing Hope and Oregon Tradeswomen, which together provided a chance for women, low income communities, marginalized youth, people of color and justice-involved individuals to accrue hands-on building skills in the creation of safe shelters.

Students of Portland Youth Builders were also onsite at the tiny house unveiling last week to build a number of garden beds for residents of Dignity Village.

“The problems we’re all interested in solving are systemic problems that are deeply inter-related,” said ReBuilding Center executive director Alison Dennis. “It’s the connection between environmental sustainability and an alternative to a disposable economy – and putting back into use both the materials that are salvageable as well as the people, who society maybe thinks aren’t part of the solution, they’re just seen and stereotyped as the problem.”

Since Dignity Village opened, the ReBuilding Center has been donating and replacing its materials as they reach their life expectancy, mainly due to mold and leaks.

“I’m so stoked about this,” said village resident Scott Layman. “When we first got here, we used whatever we could, however we could. But it wasn’t all up to code. We started out with our tents on palettes. And when it rained here, we were in a puddle. And then we slowly started replacing the old structures with livable structures.”

The project partners are working on an additional four tiny houses, which will also be outfitted with solar panels that will tie into the village’s electrical grid.

“The goal is, if we can get the next four houses done, the entire village will be able to run its energy off solar power,” said Tom Patzkowski, store manager of the ReBuilding Center.

The new homes come with an indoor light, a porch light, and outlets to power devices. Taking the strategy one step further, the excess solar energy generated by the tiny homes will then be used to offset the electricity bills of low income homes in the surrounding neighborhoods.

Josh Kopczynski, owner of DPI Solar, said ideally the project is shooting for a total of 12 tiny homes.

“Twelve homes would double the amount of power that this property uses,” he said. “So what we’re effectively trying to produce here is a solar power facility, not only to power the community here, but also to double or triple the amount of output that they use in a year, and all those extra kilowatt hours will help low income assistance. We’re trying to change the narrative of how people view this entire property.”

“They’re the most energy-efficient homes we could build,” continued Kopczynski. “And for the first time in years, the tenants here are warm.”

The partners are currently working to raise $25,000 to build the next four tiny homes in time for Labor Day.