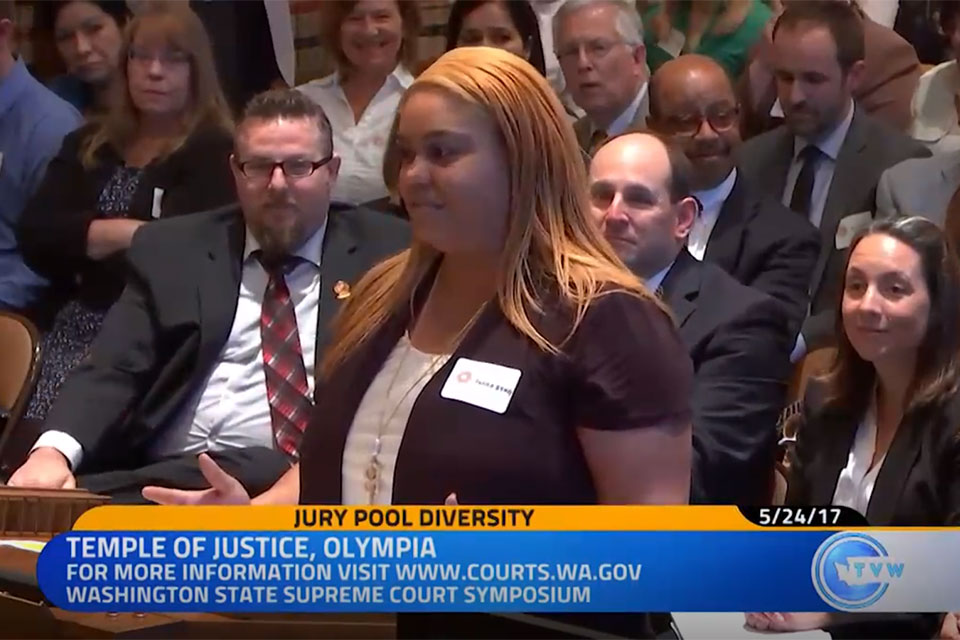 SEATTLE — The Washington Supreme Court on April 5 became the first court in the nation to adopt a court rule aimed at eliminating both implicit and intentional racial bias in jury selection. General Rule 37 will take effect at the end of April and will apply to all jury trials, civil and criminal, throughout the state.

The rule will expand the prohibition against using race based peremptory challenges during jury selection. Not only is intentional race discrimination outlawed, but also challenges based on “implicit, institutional, and unconscious” race and ethnic biases will now be rejected.

“For decades in Washington state, many people of color have been blocked from participating fully in our democracy as jurors for reasons unrelated to their ability to serve,” said ACLU-WA senior staff attorney Nancy Talner.

“This groundbreaking rule for jury selection will reduce the damage done by racial and ethnic bias to the integrity of our judicial system and to communities of color.”

During jury selection, each side can use peremptory challenges or strikes to exclude particular jurors without giving a reason. Since a 1986 U.S. Supreme Court decision (in Batson v. Kentucky), these challenges can be objected to if the other side suspects that the motive for the exclusion is intentional racial discrimination. With the new rule, these objections to peremptory challenges will no longer be restricted to instances of purposeful discrimination but can also be used if an “objective observer” could view race or ethnicity as a factor in use of the peremptory strike. The rule specifies that an objective observer is someone “aware that implicit, institutional, and unconscious biases, in addition to purposeful discrimination, have resulted in the unfair exclusion of potential jurors in Washington state.” Read full text of the rule.

Since the 1986 decision in Batson, peremptory strikes, when challenged on the basis of race discrimination, are often defended with reasons that historically have been associated with racial bias. These reasons include having prior contact with law enforcement officers, expressing a belief that law enforcement engages in racial profiling, having a close relationship with people who have been stopped, arrested, or convicted of a crime, living in a high-crime neighborhood, receiving state benefits, and not being a native English speaker. Demeanor-based justifications for exclusion are also invalid absent corroboration, because, as ACLU-WA Cooperating Attorney Lila Silverstein explains, “such justifications are often borne of implicit biases and have historically been used to exclude potential jurors of color. The new rule directly confronts this problem.”

“The court has recognized that the fair and impartial administration of justice requires changing the conversation about racial and ethnic bias in our courtrooms. It has expressly acknowledged the insidious role of implicit and structural bias, and reasons previously considered as acceptable for excluding a juror will now be rejected for their association with bias,” said the ACLU-WA’s Nancy Talner.

Jeffery Robinson, deputy legal director for the ACLU, added, “By acknowledging the harms done to communities of color, the court has taken a giant step toward building trust in the legal system.”

Adoption of the rule builds on the court’s leadership in sponsoring a symposium about jury diversity in Washington state in May 2017. At the symposium, an African American woman who had been excluded from serving on a jury explained how distressing the experience had been. Her moving testimony conveyed the devastating effects of racial bias in jury selection on communities of color.

The rule was originally drafted several years ago by ACLU attorneys Robinson, Talner, and La Rond Baker, along with cooperating attorneys Salvador Mungia, Silverstein, Jim Lobsenz, and David Zuckerman. Support for the rule grew, and several organizations earlier this year served on a working group at the request of the court to fine-tune the language, with key contributions from working-group participants Sara Ainsworth and Taki Flevaris. Working group members were the ACLU, the Washington Association of Criminal Defense Lawyers, Legal Voice, the Loren Miller Bar Association, the Latino/a Bar Association of Washington, and the Korematsu Center for Law and Equality at Seattle University School of Law. Their united efforts were critical to the passage of this historic rule.

Read more about the ACLU of Washington on their website.