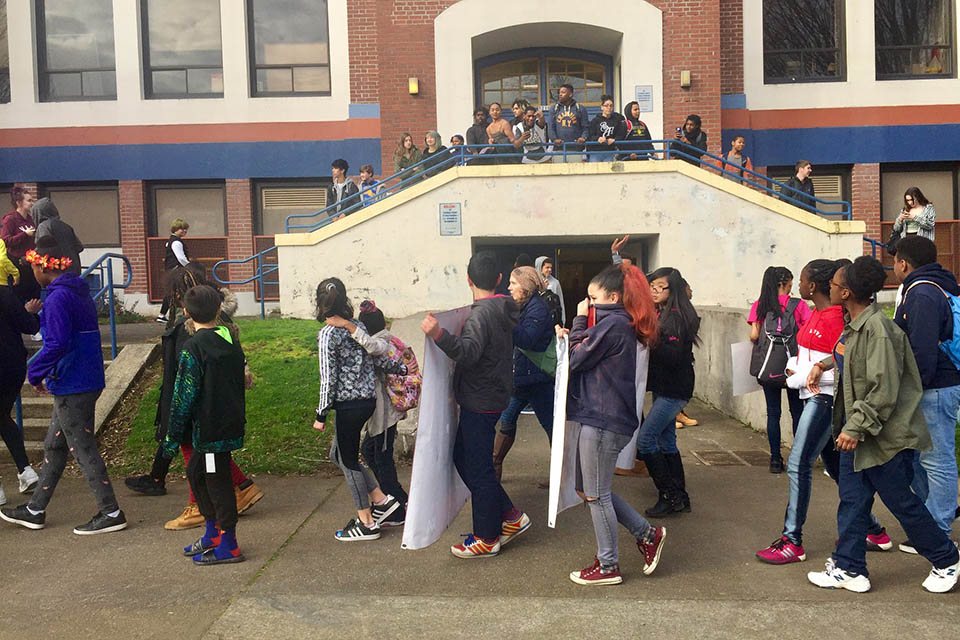 Portland Public Schools announced Tuesday afternoon it would not terminate an Ockley Green Middle School teacher who was placed on leave March 23 in connection with a Feb. 9 student walkout.

“Following the February 9 walkout at Ockley Green middle school, the District received multiple accounts of student safety concerns. We began an investigation into the event,” writes Kylie Rogers, chief HR officer for PPS, in a Tuesday-afternoon email to local press. “Our review concluded that there were serious safety risks posed to students during the unplanned walkout on February 9. Based on those findings, I recommended initiating the termination process for an Ockley Green educator. In ongoing conversations with Ockley Green leadership, and in response to the school community’s feedback to the district, I now have a broad understanding of the historical failure of the district to consistently support the Ockley Green community. Since we cannot be certain of the role that our systemic failings played in this incident, I no longer believe that termination is an appropriate recommendation.”

That message, timestamped at 5:04 p.m. Tuesday, immediately followed a parent-led demonstration planned at 4:30 p.m. outside school district headquarters. Parents and students also rallied at the school on Monday morning – some staying all day until classes were over. And an online petition to reinstate Riser had more than 4,000 signatures as of Tuesday afternoon.

Kiante Griffin-Holmes, whose son attends Ockley Green, told The Skanner Riser is one of a small number of teachers at the school who she trusts to advocate for students without bias.

Griffin-Holmes’ son is part of the school’s Black Student Union, and parents and students say it was the BSU – not Riser nor activist Teressa Raiford, who had come to speak to students – who started the walkout.

Riser had invited activist Teressa Raiford to speak at the school on the morning of Feb. 9 as part of a week of Black history events. Feb. 9 was also the first anniversary of the death of Quanice Hayes, a 17-year-old Black Portlander who was shot and killed by Portland police. Students then walked through North and Northeast Portland – to the North Police precinct, to Jefferson High School and Portland Community College’s Cascade Campus.

Community members said Riser was singled out and that the district’s response to the Feb. 9 demonstration, compared to walkout, was not consistent. According to Griffin-Holmes and Johnson, several teachers and administrators enthusiastically joined the march. PPS spokesperson David Northfield said it’s true there were other teachers involved in the walkout, but his narrative differed from the parents’.

“There were a few staff members including a vice principal who when they saw the students were leaving were alarmed and went along with them since there was no plan in place. I would hesitate to describe those people as participants since it would make it sound like they were participating in the organizing of it, which is not the case,” Northfield told The Skanner.

An email sent the afternoon of Feb. 9 to Ockley Green parents and signed by principal Paula McCullough and obtained by The Skanner describes the walkout this way:

“The activist then walked outside and asked students to follow, and many of them did. Teachers and one administrator followed to help ensure student safety. The group then marched to Portland Police Bureau’s North Precinct. The march proceeded to Jefferson High School, past Portland Community College and back to Ockley Green. Portland Police officers sent officers and patrol cars to escort the students, block streets, and keep everyone safe.

“The protest was not organized or condoned by Ockley Green administrators or Portland Public Schools.

“We are proud of our students for taking an interest in current events involving the community as well as our larger society. However, we want students and staff to know that there are more appropriate ways to organize an event. If we work together, we can ensure student safety and minimize disruption to the school while still honoring students’ voices.”

Riser’s suspension garnered national attention, perhaps due to increased attention paid to youth-led social movements in the wake of the Feb. 14 school shooting in Parkland, Florida. In March students across the country held two events – one on March 14, a Wednesday, and one on March 26, a Saturday – to call for reformed gun laws.

Students in Portland, including a small group from Ockley Green, were among them. PPS sent a press release to local media March 14 announcing several media-friendly, district-sanctioned events, and according to Northfield, the district did not sanction any walkouts.

Here’s how an email sent to Ockley Green parents by principal Paula McCullough on the morning March 14 described the event:

“We want you to know that the school sponsored event was successful and all students returned to class at its conclusion. About five minutes into class a group of about 75 students chose to stage a walkout. This group of about [sic] currently is at Jefferson HS,” McCullough wrote.

The March 14 email goes on to name four teachers who were then with the students; Riser was not among them.