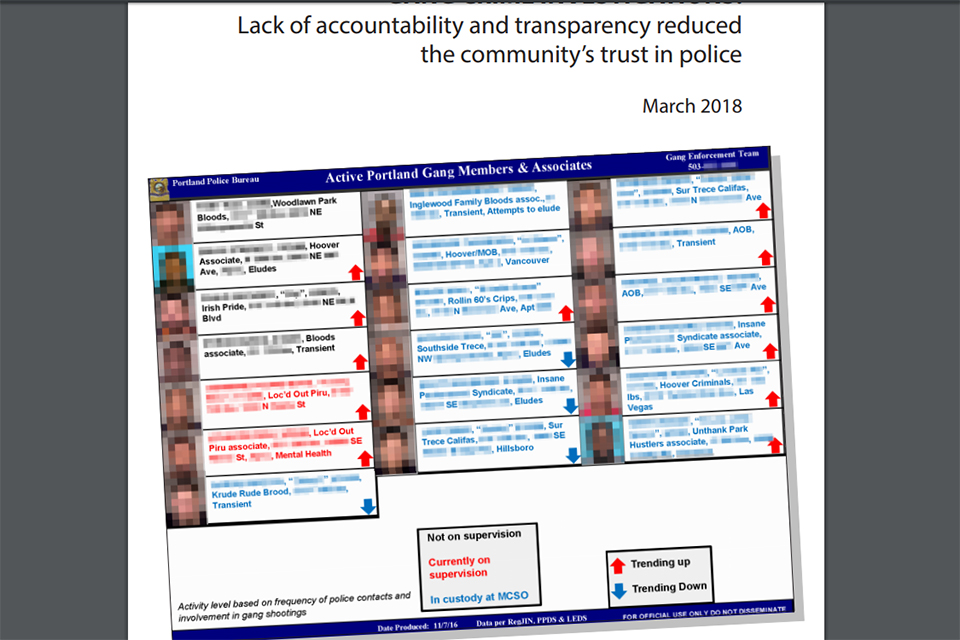 Two audit reports released this week by the City Auditor’s office call on the Portland Police Bureau to show traffic stops are effective in addressing gang violence and to increase accountability and transparency for the bureau’s Gang Enforcement Team. It also found the police bureau continues to collect information about individuals’ gang associations despite its discontinuation and disavowal of a similar practice last fall.

“Because the Police Bureau has not shown that these stops are effective, the audit recommends the Police Bureau analyze and publish data about Gang Enforcement stops, such as demographics, reasons, and results,” reads a Tuesday-night press release accompanying the reports. Auditors also recommend the team set goals to measure the success of such stops in order to demonstrate whether they’ll be effective.

The bureau’s decision last fall to discontinue its gang affiliate designation was both celebrated and met with skepticism. Shortly after the announcement, The Skanner spoke with individuals who’d been on the gang member list who said they suspected police would find more covert ways to surveil communities of color.

The city’s audit appears to support that prediction.

“While the Bureau has discontinued gang designations, it continues to create most active lists, which includes a notation of people’s gang affiliations. At the time of our audit, the Gang Enforcement Team used informal conversations among employees, police reports, and gang designations to compile a list of some 1,000 people who were associated with gang incidents. The team then assigned scores to each person based on the number and type of contacts the person had with police and created a list of the people with the top scores – usually about 30 people. The types of contact included shootings and gun seizures, but also non-criminal events and being victims of crime. The document was updated every month,” a second audit report says.

Both audit reports close with correspondence between the auditor’s office and the police bureau outlining a list of recommendations, all of which the bureau has agreed to and either says are in place or in process. The recommendations are: