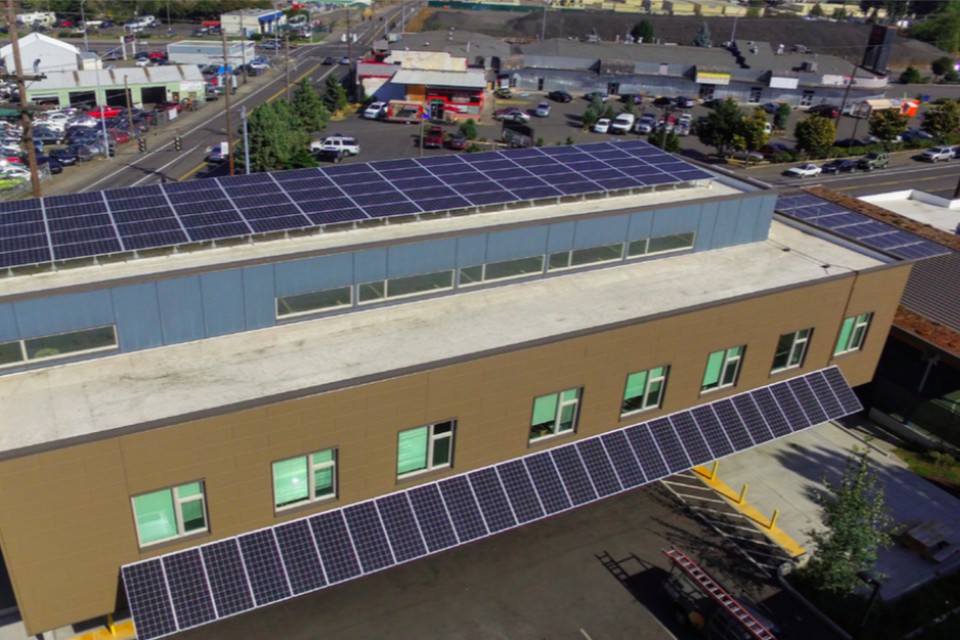 While the Northeast Portland neighborhood of Cully was gearing up to release its new plan on tackling clean energy, disaster struck. On March 12, a five-alarm fire erupted at NW Metals, an auto salvage yard near Northeast 75th Avenue and Killingsworth Street. Thousands were ordered to evacuate the area while dark, billowing smoke polluted the skies above. According to Portland Fire and Rescue, close to 10 families lost their homes.

Within a week of the crisis, the collective known as Living Cully introduced Living Cully Community Energy Plan, a strategy that – in the wake of the scarp yard fire – underscores the need to bring renewable energy to communities often left out of the green economy.

A collaborative effort between Habitat for Humanity, Hacienda Community Development Corporation, the Native American Youth & Family Center and Verde, Living Cully was formed in 2010 to address disparities in the neighborhood by making environmental investments to boost outcomes in education, income, housing and health.

Often portrayed as an undesirable region of Northeast Portland, Cully is characterized by its large lots, unpaved roads, and its highly diverse, majority low-income residents. According to Living Cully, the neighborhood includes one of the most racially and ethnically diverse census tracts in Oregon, with 13.4 percent of residents identifying as Black. It also suffers from “poor walkability, scarce access to transit, relative lack of open space, and an abundance of contaminated, post-industrial land.”

It’s no surprise then that these types of neighborhoods get least priority when companies and local governments are looking to invest in clean energy and climate change policies. Meanwhile, people with means living in dense urban areas are the first to reap the benefits of energy incentives and efficiency upgrades.

“The beneficiaries of our current energy policies are primarily White, middleclass or upper-income individuals,” Jo Ann Hardesty, president of the NAACP Portland branch, told The Skanner back in July 2017. “Low-income folks and communities of color are continuing to struggle with high energy costs and the inability to live in an energy-retrofitted environment.”

The NAACP has since been making strides to educate lawmakers on how low-income people and communities of color are disproportionately exposed to industrial pollution from sources like power plants, toxic sites and roadways. Because of this, these populations are the first to experience the negative impacts of climate change, such as natural disasters and extreme weather, as well as having less access to clean water due to drought.

“We definitely believe that climate change is here and is already beginning to impact residents in Portland,” Carolina Iraheta Gonzalez, community energy advocate at Verde, told The Skanner. “A really good example of that is the colder winters we’re experiencing and the hotter summers. People are having to use more electricity during the winters to heat their homes and we’re also seeing electricity peaks in the summer due to AC, so their monthly income is being stretched even further.”

In Cully, the median electricity burden – meaning the percentage of annual household income spent on electricity – for all households is higher, at 2.25 percent, when compared to all Portland households, which averages 1.67 percent.

“We worry that people won’t be able to stay in the neighborhood as we see climate changes happening,” continued Gonzalez. “Renewable energy and energy efficiency is definitely a tool to address climate change, but it’s not always accessible to low income families. So we want to make sure that families in Cully have access to these tools.”

And the desire is there. Community surveys in Cully found that 94 percent of people said they were interested in getting solar energy.

After intensive rounds with community partners, utility experts and clean energy professionals, alongside surveys and focus groups, Living Cully has come up with six pilot projects. Together, the projects aim to conserve energy, make use of renewable sources, allow low income families to bring down their utility costs, and prevent further displacement from the neighborhood.

With an estimated budget of $2 million over two years to accomplish the projects, Living Cully is looking to secure funds through a number of streams, including state grants and incentives for renewable projects. Verde has already received $300,000 from Pacific Power's Blue Sky program to launch the St. Charles Church project.

Moreover, Cully is aligning itself with the city’s 1993 Climate Action Plan (CAP), which made Portland the first U.S. city to create a strategy for cutting carbon. The city’s plan has since been updated twice and is working towards achieving a 40 percent reduction in carbon emissions by 2030 and an 80 percent reduction by 2050.

Living Cully is hoping their strategy can be used as a blueprint for other neighborhoods in Multnomah County. “We think that the Living Cully Community Energy Plan serves as a model,” said Gonzalez. “It was written so that other communities could begin their own process or look at the pilot projects we’ve chosen and see how they might fit in their neighborhoods.”