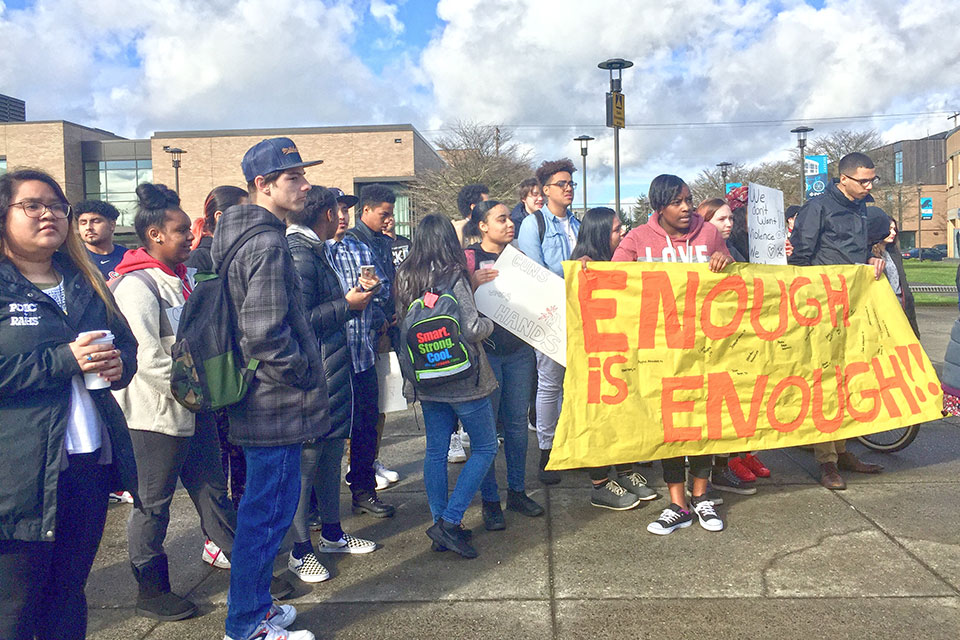 At 10 a.m. on Wednesday, March 14, about 50 students and teachers gathered at the Portland Community College Cascade Campus as part of a national school walkout to honor the 17 victims of the Stoneman Douglas High School shooting. A group of student protestors from Rosemary Anderson High School joined the crowd at PCC, marching behind a hand-painted “Enough is Enough” banner. After passing around a megaphone and sharing thoughts on gun reform, campus climate, and the Florida tragedy, a moment of silence was observed.

Khaleia Black, a Rosemary Anderson student, spoke about the lack of resources at RAHS. “We’re at an alternative school, and there’s no therapist,” she said. “There’s nobody there to talk with us about our problems.” High school students in particular were encouraged to take the megaphone, and clipboards were at the ready with voter preregistration forms for 16 and 17-year-olds.

Sources estimated about 100 students walked out of Jefferson High School, and schools around the area joined what the Associated Press estimates was one of the largest student protests since the Vietnam era, with tens of thousands of students around the country joining in. In a Wednesday-morning press release, Portland Public Schools said it supported the students and would hold “student-centered activities around the topic of safe, supportive and inclusive schools and classrooms.”