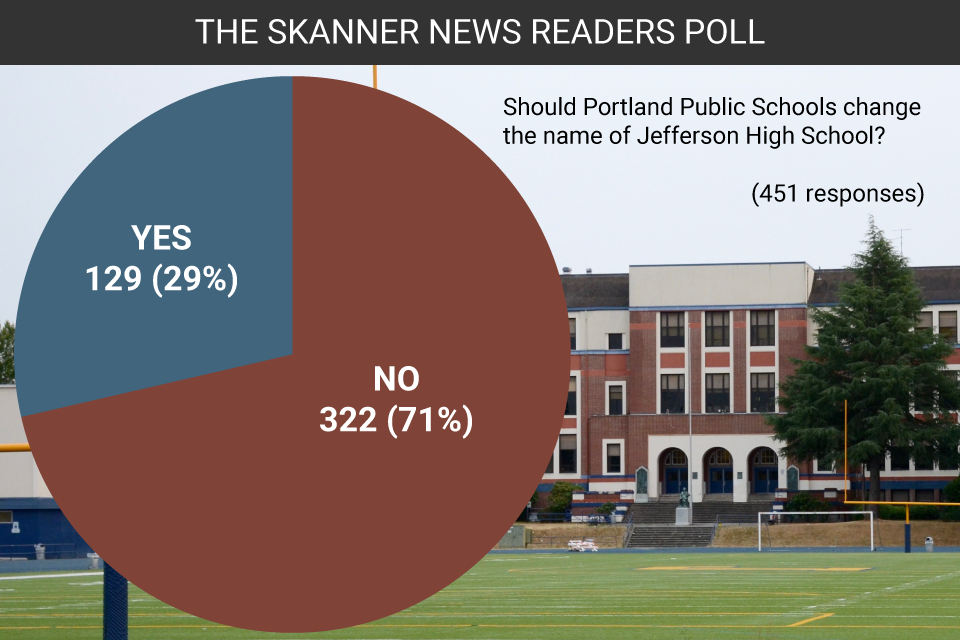 The results of a poll by The Skanner News, which opened Feb. 22 and closed Tuesday, favor keeping the name of North Portland’s Thomas Jefferson High School.

At the same time, Portland Public Schools – responding to a complaint about Franklin High School’s mascot, the Quakers – has announced a potential policy change that would make it easier to change the names of schools and mascots. That policy, available on the school district’s website, is under public comment until March 20 and revisions may be made before it is adopted; comments can be sent to schoolboard@pps.net.

According to Anne LaBorde, the current chair for the Humboldt Neighborhood Association, the neighborhood association adopted a policy in 2012, reading, “This board is opposed, as a matter of policy, to retaining names of schools and other public institution names for former slave owners or others who did not respect equal opportunity for all.”

That policy was renewed in November 2017. Clifford Walker, a longtime resident of the Humboldt Neighborhood, where Jefferson is located, was part of the discussion on both occasions, and has also recently testified before the Multnomah County Commission regarding his concerns about the name of the school.

“I just think it’s inappropriate to have a statue of a White supremacist and slave baron at the front of a public school,” said Walker, who graduated from Jefferson in 1961.

LaBorde said she has heard an “inspiring and enlightening” range of comments and opinions on the subject.

“There are those who look at the historical reference and implications and there are those who look at their own personal identity and legacy,” LaBorde said. “Then we have some wonderfully out-of-the-box students who said we identify with the name Jefferson, but not with Thomas.” According to LaBorde, students have suggested keeping the name “Jefferson,” but dropping “Thomas,” and removing the statue.

“What I’m most concerned about is our legacy. Our legacy is there, it’s earned,” said Marvin Sanders, who graduated from Jefferson in 1978. “The poetic irony of a Black high school being named after a slave owner -- I just love that. Any name change destroys the legacy of what the school stands for.”

Walker grew up in the Humboldt Neighborhood Association and remembers when it was common for area businesses to hang signs saying, “We cater to White trade only.” When his parents bought their home, neighbors circulated a petition to prevent the sale going through, he said. For Walker, seeing the the neighborhood to adopt a policy in opposition to racist names and monuments is a sign of positive change.

Sanders doesn’t see it that way.

“The real topic needs to be gentrification,” Sanders told The Skanner. As he sees it, changing the school’s name is another way to erase the history of Northeast Portland.

Jefferson, one of few majority-Black schools in the state, is located in the Humboldt neighborhood, but the school attendance zone is much larger than Humboldt. It encompasses a large section of North and Northeast Portland, including many census tracts that, a few decades ago, were majority-Black and are now majority-White due to rapid redevelopment in the area.

“I think it would stand as another slap in the face to what’s left of the Black community that used to be in inner Northeast Portland,” Sanders said. The proposed change is also a symptom of what Sanders called a “hypersensitive, revisionist time” and that Jefferson, while a slave owner, was also “the father of democracy worldwide.”

Jefferson High School opened in 1908 as Albina High School, changing its name a year later. The school’s statue of Thomas Jefferson was erected in 1915.