A New Look at a Black Pioneer 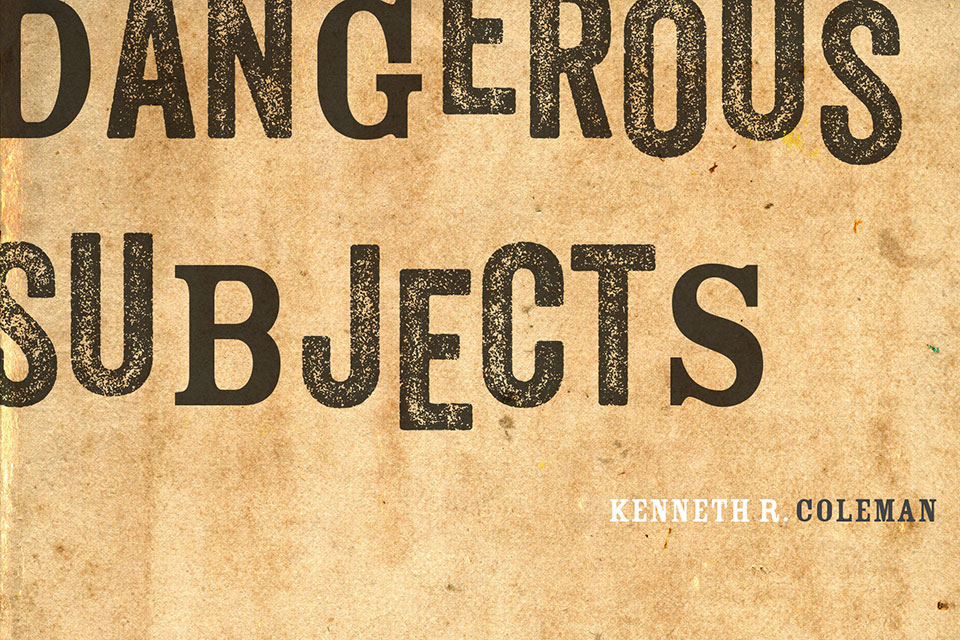 A new book by a Portland author takes a closer look at the life of James D. Saules, an African American settler of Oregon – and the circumstances that led Oregon’s provisional government to adopt a Black exclusion law, later enshrined in the state constitution.

Kenneth R. Coleman is the author of “Dangerous Subjects: James D. Saules and the Rise of Black Exclusion in Oregon,” published in 2017 by Oregon State University Press. Saules, a free Black man born in the 19th century, traveled the world as a sailor and eventually settled in the Willamette Valley after surviving a shipwreck off the Oregon Coast.

In 1844, Saules was at the center of two controversies involving Native Americans indigenous to the Willamette Valley – the latter of which resulted in his arrest and banishment from the area, and the passage of Oregon’s first Black exclusion laws. The first incident, known as the Cockstock Affair, involved a dispute between Saules and Cockstock, a Native American associated with the Wasco and Molalla tribes, and culminated in a clash between Natives and White settlers that killed Comstock and two White men. Just two months later, a White man named Charles Pickett accused Saules of trying to incite members of the Clackamas tribe against him. Saules was arrested, tried by a jury that included a close friend of Pickett’s, convicted and eventually banished from the region. 1844 was also the year Oregon’s provisional government passed its first laws excluding Blacks from emigrating to the area.

The Skanner News spoke with Coleman about researching Saules’ life and the ongoing legacy of Oregon’s exclusion laws. This interview has been edited for space and clarity.

The Skanner News: How did you first hear about James Saules?

Kenneth Coleman: I first encountered him not in an Oregon history class, but a methodology class. It was actually before I started studying Oregon history. The instructor gave us a section of the book “A Peculiar Paradise,” which is one of the few books written about the history of Black people in Oregon. She just wanted us to look at the book with the critical eye of a historian. One of the stories in it was about James Saules, and talked about his involvement in the Cockstock incident, so already, I just got interested in this sort of pre-statehood Oregon that I really knew nothing about.

TSN: What led you to decide to write about him?

KC: I’m from Oregon. It took me a long time to start looking into the history of where I was from, but I knew somewhere in the back of my mind that we were living in a colonized space, that we’re living on indigenous land.

And not only is it a colonized space but also, growing up, I saw White supremacy up close. I came of age during the era of skinheads, police brutality, segregation -- these were all things that I saw, kind of, growing up. And then, once I started studying history, I really wanted to know why Oregon was the way it was, why it was so segregated, why there was such a lack of diversity in many spaces. I really thought these two things were related: that the reason why there were so few Black people living in Oregon was actually related to Indian removal. These kind of came from the same historical period and a similar ideology.

Saules came in when I went back and looked at when the Oregon Trail immigrants arrived and wanted to create their own homeland, you know, an Anglo-American homeland in Oregon; they passed legislation banning the immigration of Black people. The rhetoric that they often used was they wanted to prevent Black people and Native people from collaborating, from intermingling and forming a bloc that would then destroy the sort of nascent White settlement. Saules was actually arrested for inciting Indians to violence against a White settler. Soon after that, they passed the first, the provisional government passed the first Black exclusion law – the so-called lash law in 1844. All these things started to connect in my mind.

TSN: There’s not a lot of recorded information about Saules himself, so for the book you had to make some extrapolations based on related information -- about the lives of African American sailors, the lives of people who settled the Northwest. What were some of the more surprising discoveries in that process?

KC: Originally I was writing about Black exclusion, and when I was writing about that it became a very narrow and local story, and one that very much focused on the overland White settlers. But once I focused on Saules, the story changed and it really opened up into looking at the lives of nominally free Black people in the United States, into the maritime industry and the role of Black men, and men of color, in maritime colonialism and merchant capitalism. It became a much more trans-national story and far less of a local story. It kind of forced me to get out of Oregon and start looking at other places.

That also got me looking at Black exclusion. I think Oregonians tend to be sort of exceptionalist about our area and think that everything that happened here was special and unique, but there was Black exclusion in every part of the country. I think the role of a historian is to say, well, why was it different in Oregon and what were the conditions that led people to pass this sort of legislation in the first place? It was a different situation here than in other places that had Black exclusion.

TSN: What other states had exclusion laws on the books?

KC: It was almost every region, but for different reasons. When you think of the Northeast, we tend to think that once slavery was abolished in the Northeast you just sort of had free Black people, but there were still all sorts of laws to circumscribe the activities of free Black people and restrict them from going certain places, living in certain communities. In the South, it was about preventing free Black people from inciting enslaved people to revolt and feeding them information. In the Midwest, there was a concern that escaped slaves would come to the community from the South and that if slavery were ever abolished, then suddenly you would have massive numbers of free Black people moving into the Midwest, what was called the Old Northwest.

TSN: What was unique about Oregon’s Black exclusion law – other than the fact that it was the only one that was enshrined in the Constitution?

KC: When Oregon became a state, they actually had Black exclusion [in place already], so that was unique. Other states would oftentimes institute laws later or do them on more of a local level.

I think what fascinated me originally was there wasn’t really any indication that there was going to be some sort of massive migration of Black people to Oregon at any point. That was the first thing that sort of fascinated me – this obsession with Black exclusion. When Oregon became a territory, they would pass a Black exclusion law. When Oregon became a state, they passed a Black exclusion law. This sort of obsession, when it didn’t seem like this was actually even an issue that should have even come up, but it clearly was to maintain this color line. They justified it, again, as a means to prevent Native people and Black people from collaborating. I think that sort of betrays the racial views of those people, this sort of binary relationship – that of course [Natives and Blacks] would join together against White people.

The other interesting thing is that all of the legislation usually focused on sailors. It wasn’t about a sort of enslaved population. It was actually about Black people influencing the Indigenous population. The people who settled in Oregon came from the Old Northwest – you know, Illinois, Iowa, Missouri, places like that -- they were literally bringing these law books with them. It was natural in some sense that they would reproduce that sort of legislation regardless of the conditions that were completely different. Another important thing to consider is that even though these were White supremacists, they were anti-slavery.

TSN: Oregon’s racist history and racial demographics have gotten a lot more scrutiny in the last few years, in the local and especially the national press -- with several stories highlighting the exclusion laws. Are there aspects of that that you think are still under-discussed or not well understood, either locally or nationally?

KC: There’s a lot of focus on the Black exclusion laws, the 1844 lash law, the 1849 territorial law and the state constitution. But people don’t really talk about the 1850 donation land act, which I think had a far greater impact in terms of enshrining White supremacy because it gave away a lot of free land to White men who willing to come to Oregon, preferably with a White spouse and cultivate land. They would be given as much as one square mile of free land on which to cultivate.

But this was racialized land. If you were a Black person or a Chinese person or a Pacific Islander or an Indigenous person without a wife, you couldn’t get this land. And 10,000 people came to Oregon that way, getting this free land and establishing power. And I think if you really want to look at how White supremacy and the idea of Whiteness reproduces itself, it’s through this ownership, this commodification of land and then this ownership of land and wealth and power – and other people had no access to this. I think you could draw a straight line from the donation land act to redlining and real estate covenants that were used in producing segregation in the 20th century, even with gentrification and the laws about redevelopment and who wins and who loses.