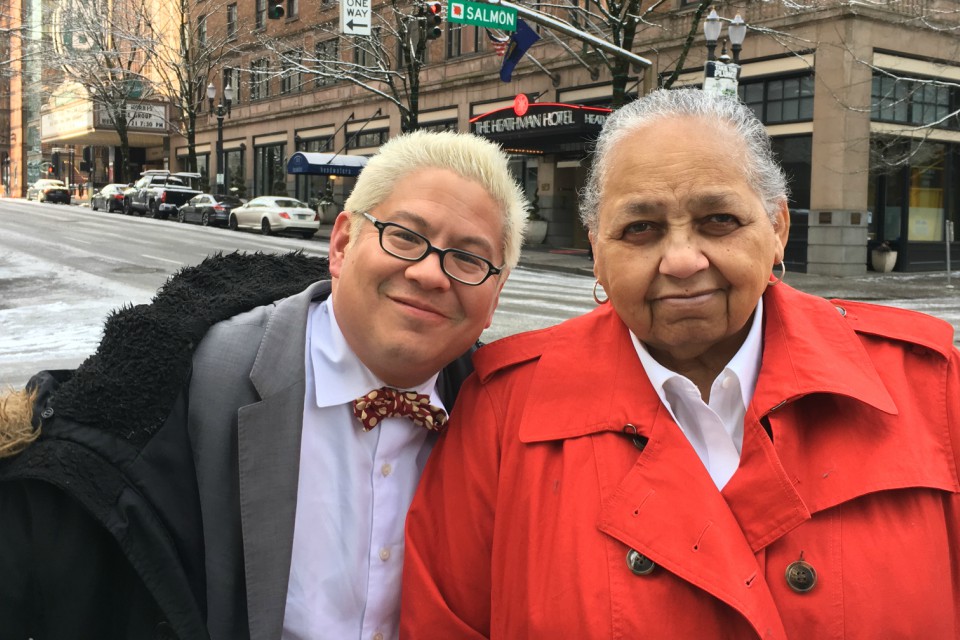 At 77 years old, Portland’s legend of civil rights activism, Kathleen Saadat, is making her recording debut after a lifetime of singing behind the scenes.

With an international release date set for March 2, “Love for Sale” is a 10-track album of jazz standards featuring Saadat’s lead vocals and arrangements by Thomas Lauderdale. It also includes performances from members of his Portland-based “little” orchestra, Pink Martini – an ensemble that fuses classical, Latin music, pop and jazz.

As one of Oregon’s most respected social and political activists, Saadat has advocated for equality and social justice for over 40 years. Her dedication has assisted marginalized and under-represented groups including communities of color, women, and LGBTQ people.

Saadat was appointed Oregon’s affirmative action director under Gov. Neil Goldschmidt in 1987. Later, she worked within Multnomah County’s Department of Community and Family Services and helped draft the Portland Civil Rights Ordinance. She was also the diversity director at Cascade AIDS Project, and in 2012 she accepted the Lifetime Achievement from the Portland Human Rights Commission.

But when she wasn’t on the frontlines of the cause, Saadat was singing.

“I cannot remember not singing,” she told The Skanner. “During World War II, I lived with my grandmother who sang every day, so my brother and I sang with her.”

While Saadat said her entire family had a gift for song, she never gave much thought to a career in music.

“The closest to any professional training I’ve had was one year in my high school’s glee club, about a year in the children's chorus at the AME Zion church, and with voice coach Susan Dorn while I worked with Thomas to do this album,” Saadat said.

“I would guess there are about 66 years between the church and this experience.”

It’s no surprise that Saadat and Lauderdale’s almost 30-year long friendship grew out of their love of music. After meeting in 1991, when they both worked for City Commissioner Gretchen Kafoury, the two struck up a unique friendship and would often get together to sing.

“When she speaks in public, what makes her speeches so impactful is that she’s direct and every word means something,” said Lauderdale, who formed Pink Martini in 1994 after stepping away from a profession in politics. “And that’s how she sings, which very few people do.”

Eventually, Saadat approached Lauderdale with the idea of recording a few songs to share with family and friends. That was the seedling which, six years later, would become “Love for Sale.”

“Each of these songs on the album has a narrative and her voice is so rewarding to listen to,” Lauderdale told The Skanner.

“In the same way that she’s spellbinding when she speaks, I’m spellbound when she sings.”

The album marks the first time the activist has recorded professionally.

“I never recorded anything because I’ve never regarded myself as a singer. I’ve never seen myself as someone who had a singer's voice,” said Saadat. “I don't read music nor do I play an instrument, so I just considered my singing as something I did mostly for me.”

Selections from “Love for Sale” will be performed during a special concert at the Aladdin Theater in Southeast Portland on March 1. Saadat will be joined on stage by Lauderdale, Portland jazz legends Mel Brown and Randy Porter, and guitarist Dan Faehnle, bassist Phil Baker, and lead singer China Forbes of Pink Martini.

It’s not the first time Saadat will perform on stage with Lauderdale, however.

The two have sung at benefits in the past and she has also joined Pink Martini during their New Year's Eve engagements at the Arlene Schnitzer Concert Hall. Earlier this year, she accompanied the band during eight shows in Palm Desert, Calif.

“I got a taste of how hard this band works to entertain the audience,” said Saadat. “It was a great experience to be among such professionals.”