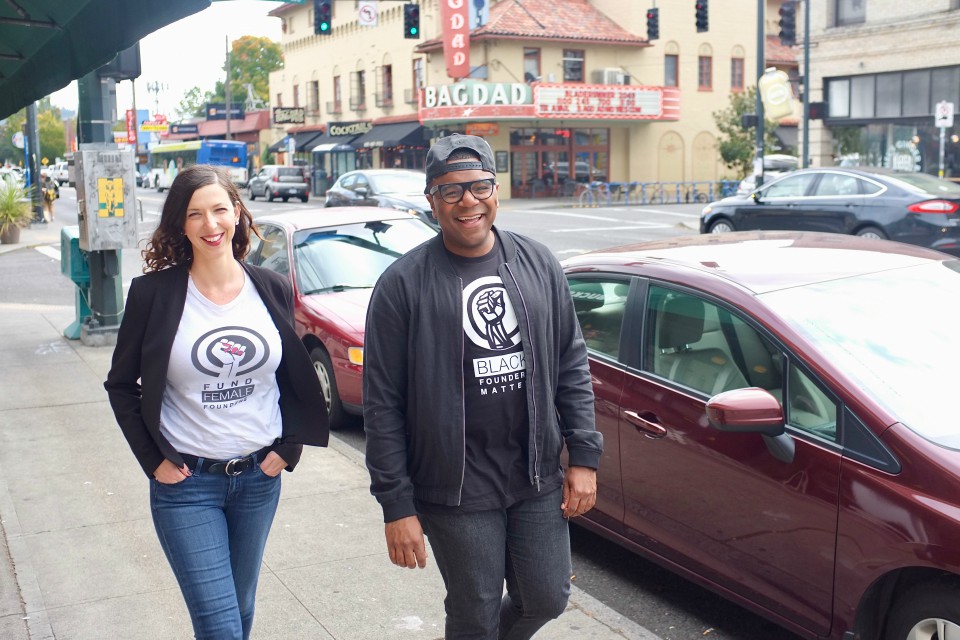 Launched last fall, Fund a Founder works by offering anybody a chance to fund small companies through the purchase of a custom T-shirt or hoodie. Shoppers can choose between the ‘Black Founders Matter’ line or the ‘Fund Female Founders’ collection, designed by artists Zephan Knaus in Portland and Atlanta resident Will Henry.

Through apparel sales, Michel and Brown are looking to take down the barrier to capital – one T-shirt at a time.

While offering gifts or incentives to public donors is nothing new in the crowdfunding sphere, Michel said he’s yet to hear of a tech company that’s doing it with T-shirts.

“It’s definitely a different approach to fundraising and supporting minorities and women in tech,” Michel told The Skanner.

Yet the genesis of the campaign came naturally between friends. “(Kathryn and I) both faced the same challenges when it came to raising money for our businesses. And we both have celebrated, award-winning businesses that no one wants to fund,” he joked.

Michel’s on-demand staffing platform, Werkhorse, won him the Techstars Startup Weekend, Portland Pitchfest, and a grant from Prosper Portland. It was also selected to present at last year’s AfroTech, the largest Black tech conference in the nation. In 2018, Michel will be taking Werkhorse to TiE Oregon, an incubator for the state’s newest tech start-ups.

Likewise, Brown’s ScoutSavvy – a career finding tool for women in tech – scored her the 2017 Company of the Year: Pre-revenue Award at the Oregon Technology Awards and was a finalist for the Top Social Impact Startups for the 2017 Bend Venture Conference.

But regardless of the accolades and the demand for their products, the two Portland entrepreneurs have run into the same trying circumstance time and again: lack of funding.

“Money creates a whole set of new complex challenges, but it usually solves an immediate problem,” said Michel -- from paying a company’s rent to paying its utility bills.

Their funding woes are not unique to them, however.

In 2016, female-led companies made up just under five percent of all venture capital deals, while less than one percent went to Black founders.

Michel said it’s a typical scenario faced by most budding entrepreneurs – one he compares a band scoring its first short-sighted record deal. “You start your own business as an entrepreneur and you have so much control, then you go to fundraise and you have no control again.”

With their T-shirt campaign, Michel is looking to change the trajectory.

“My dream with Fund a Founder is really to create an alternative to traditional funding and dismantle the status quo.”

The child of Haitian immigrants, Michel was born in New York City and has traveled to over 30 countries. Before breaking into tech, Michel toggled among the service industry, fundraising for local charities, and corporate sales. He’s also a sign language interpreter and speaks four languages.

And he’s excited for the future.

According to Michel, the next cohort of TiE start-ups is majority minority-owned. “And it wasn’t on purpose,” he said. “These are the companies that are doing great and innovative things and are thinking outside of the box. We’re here – but we need the money to make the dream come true.”

Fund a Founder recently launched an additional T-shirt design – the “naughty robot” for the tech outlier, which is often how minorities and females feel in the start-up arena, Michel explained.

And while Fund a Founder is currently raising capital for his and Brown’s companies, the goal is to expand the model to support his peers on a larger scale.

The clothing is also meant to spread awareness about the needs of minority and female start-ups – think of each T-shirt like its own social awareness billboard.

Though still in the early stages, Fund a Founder is slowly gaining traction, with the first few thousand dollars raised.

“I think it has the ability to change the landscape of funding and also empower other entrepreneurs like ourselves,” said Michel. “We want to make it more hospitable and support people who are trying this too.”