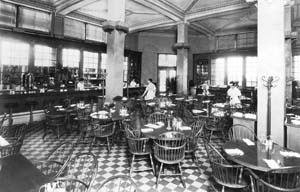 240 N. Broadway. You could easily walk by this blighted building without ever noticing it. Known to many as Multi-Craft Plastics, the building has been vacant for years. But before that, it housed a plastics factory, a pharmaceutical drug maker, a confectionery and ice cream parlor. Rumor says during the 1920s it was a speakeasy. But for a golden moment in the 1940s, it was The Dude Ranch, one of Portland's premier "Black and Tan" jazz clubs.
Now, a local developer and musician, Daniel Deutsch is lovingly restoring the building to create a community art space that will reflect its storied past.
Pat Patterson, the first African American to play basketball for the University of Oregon, owned and ran The Dude Ranch along with his friend Sherman "Cowboy" Picket.  According to jazz historian Robert Dietsche, who wrote the Portland jazz history book "Jumptown", The Dude Ranch was, "the shooting star in the history of Portland jazz, a meteor bursting with an array of the best Black and Tan entertainment this town has ever seen: strippers, then called shake dancers, ventriloquists, comics, jugglers, torch singers, world renowned tap dancers like Teddy Hale, and of course the very best of jazz."
No wonder it attracted legends such as Louis Armstrong, Thelonius Monk, Roy Eldridge, Coleman Hawkins and Lucky Thompson, as well as countless others. With hat check girls, waitresses dressed as cowgirls and all-night card games, Dietsche writes that the Dude Ranch was packed with everyone from politicians and Pullman porters to zoot-suited hipsters.
"Racially mixed party people who couldn't care less that what they were doing was on the cutting edge of integration in the city that had been called the most segregated north of the Mason-Dixon line."
In 1946, the city shut it down. Few believed that big stakes gambling and an accidental shooting were the real reasons behind its closure.
"There was too much race mixing," Dietsche told The Skanner. "It was a black eye for City Hall. They looked for any excuse … and there were so many."
What the city couldn't close down was Portland's love affair with jazz. During those years, you could find jazz at any time of  the day or the night. The city was bursting with newly arrived workers for the shipyards and other war support industries. And Williams Avenue – an economic area that spanned many blocks on and off the street — featured a jazz joint on nearly every block.
"It was quite a scene," said Dick Bogle, jazz columnist for the Skanner and radio host on KMHD 89.9. During that period, Bogle said Blacks were confined to living west of Union Avenue (now Martin Luther King Jr. Blvd.), giving club owners a targeted geographic area of talent and patrons.
Bogle said he began frequenting jazz clubs in the 1950s. He was too young to have entered the doors of the famed Dude Ranch when it was open. But he does remember the race mixing. Whites were always welcome in the clubs on Williams Avenue, both as players and patrons. But the openness wasn't reciprocated in the Downtown clubs, at least for Black patrons.
Why the Dude Ranch was singled out for allowing race mixing could be any number of reasons, but Dietsche said he thinks it also had to do with the gambling.
"Portland was a pretty wide open town except for mixed races," Dietsche said.
Vice was everywhere – prostitutes made their contacts at places such as the Dude Ranch, and gambling occurred in house, he said. Where there was jazz, he said, vice was sure to be there too.

A New Era
When it was built in 1923 as the Hazelwood candy complex, 240 N. Broadway featured an ice cream parlor and eatery on the ground floor, with candy, donut and confectionary rooms upstairs. As the Dude Ranch, bands were featured on the ground floor and at least one of the upper floors in the original corner building was dedicated to gambling.
All good things eventually come to an end. For jazz, both Dietsche and Bogle say changing music styles, urban renewal, unrestricted housing, civil rights battles and eventually gangs, brought about the end of Williams Avenue's jazz joints.
240 N. Broadway became the headquarters of Mutual Wholesale Drugs during the 1950s. And in the 70s — after urban renewal, Interstate 5 and the Rose Quarter had changed the neighborhood beyond recognition – Multicraft Plastics turned it into a factory.
Developer Daniel Deutsch, a board member of the arts group Disjecta, bought it in February 2007. The building had been sitting vacant for several years and other developers bidding on the project wanted to tear it down. But Deutsch recognized the value of the original building and hired designer Andy Powell to help him turn the 66,000 square foot structure into a gathering place for artists.
Dubbed the "Leftbank Project" the building will house studios for up-and-coming artists, as well as larger spaces for established firms. There will be enough room for gallery shows and possibly a music venue. The main ballroom will probably return to its original use as an eatery.
"In a big sense, it's a great big experiment," says Powell, who also helped design the interior of the Someday Lounge downtown. "It can be a hub for creative, progressive projects."
Powell said Deutsch isn't trying to maximize profits from the building. The plan is to create a sustainable model that balances artists/firms who can afford to pay market rate against those who need more affordable space. In other words, Powell says, they don't want 240 N. Broadway to become just another step toward gentrification.
The renovation will include repairing or replacing warped, waterlogged floors, broken windows and a leaky roof. Yet, despite years of neglect, the main ballroom has survived. Its original woodwork is intact, along with a dumbwaiter, an antique walk-in safe and a an enormous defunct boiler system.
Powell is shooting for high environmental standards. Construction crews will use sustainable building products; dozens of the original windows are being restored; and the heating unit is one of the more efficient on the market.
"We believe the single greatest act of sustainability is saving the building," Powell said. "Reusing is probably the least impactful thing we can do."
By next summer, when tenants should begin moving into 240 N. Broadway, each of the three buildings that make up the site will be decorated to reflect the era and purpose for which they were built. Plans aren't yet firm, but Powell wants to decorate the outside walls with photographs that illustrate its journey from a confectionery and industrial workplace to the hottest jazz palace in town. Visible to everyone who passes by, its contribution to Portland's history will never be forgotten.