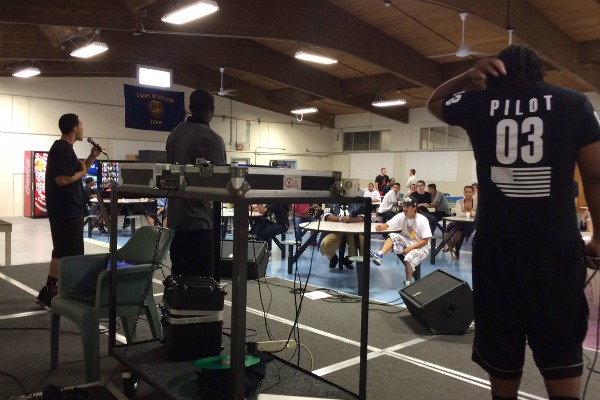 Robert White was 17 when he was arrested on a first-degree robbery charge, which he later pled down to attempted robbery and burglary.

White, who is now 25, didn’t know that in 1994 – the year he turned two – Oregon voters approved a ballot measure that would drastically reshape the lives of young people facing criminal charges. Ballot Measure 11 created mandatory sentencing for those 15 and up who faced criminal charges.

“Going through it, I was very very, very illiterate when it came to law or my rights,” White said.

The plea deal resulted in a lesser sentence – White was sentenced to 60 months initially, of which he served about four-and-a half years in two juvenile justice facilities in Oregon – but White still has a felony charge on his record. Though he received job training and several certifications while incarcerated – including a forklift license and a food handler’s license – White told The Skanner that after he was released, he struggled to find work and housing. He also feels he was more fortunate than many in having family and mentors to offer him shelter and support while he re-entered society.

Earlier this month, the Oregon Council on Civil Rights published a report in partnership with the Oregon Justice Resource Center – “Youth and Measure 11: Impacts of Mandatory Minimums” – that includes some damning statistics on racial disparities in Oregon’s juvenile justice system. It found:

The report notes that while Black youth indictments are more likely, they are less likely to lead to a Measure 11 conviction.

But an indictment can still reshape the course of a young life, and the report connects the dots between disproportionate rates of incarceration and other problems hampering Oregon’s Black communities, namely economic mobility. In Oregon, nearly 30 percent of Black families live in poverty, and the median income of a Black family as of 2010 was $15,000 lower than White families.

“The economic disparity among Oregonians of color is compounded by the fact that the children in these communities are all statistically more likely to have a parent in prison,” the report said. “As a result, these young people are more likely to be suspended or expelled from school and less likely to enjoy economic stability in their homes, all of which may contribute to their intersection with the criminal justice system.”

“For me I think the most surprising thing is how much science and research that has been done over the past couple of decades and how our criminal justice policies aren’t really connected to that,” said Bobbin Singh, the founding executive director of the Oregon Justice Resource Center.

Measure 11, he noted, was passed in a political climate where politicians in both parties, both locally and nationally, campaigned on “tough on crime” platforms -- and youth who got in trouble were described as “super predators” who could not be reformed. In the decades since, scientific research has shown that the brain continues to develop through one’s 20s, suggesting youth who receive adequate support have a good chance of turning their lives around.

“It was all politics of fear and anger. There was nothing grounded in any evidence,” Singh said.

Singh notes that for certain crimes, district attorneys have discretion in whether they can refer a teenager to the adult court system, and he hopes more DAs use it to keep young people in juvenile courts. He and Roberta Phillip-Robbins, who chairs the Oregon Council on Civil Rights, would also like to see legislative changes that address some of Measure 11’s flaws – and that address some of the bigger-picture issues connected to mass incarceration.

“It can be overwhelming to address root causes,” Phillip-Robbins said. “The way I look at it is, you can tug on the string that is incarceration, and many times there were interventions that could have been in place to prevent incarceration.” Policymakers need to ensure children and families have support to meet their basic needs, and intervene when children have problems, she said.

As an advocate, White has had the chance to meet with many others who’ve been affected by youth incarceration around the country – and has even met with Measure 11’s architects. He said he was able to turn his life around due to support from family and mentors, but the fact that young people enter adulthood with felony records – locking them out of opportunities to make a living legally – can encourage recidivism. That leaves “a sour taste” in White’s mouth.

“What’s after a storm? After a storm hits, you don’t leave the destruction there. You come back in and clean up,” White said.