The Northwest Gets its First Black History Festival 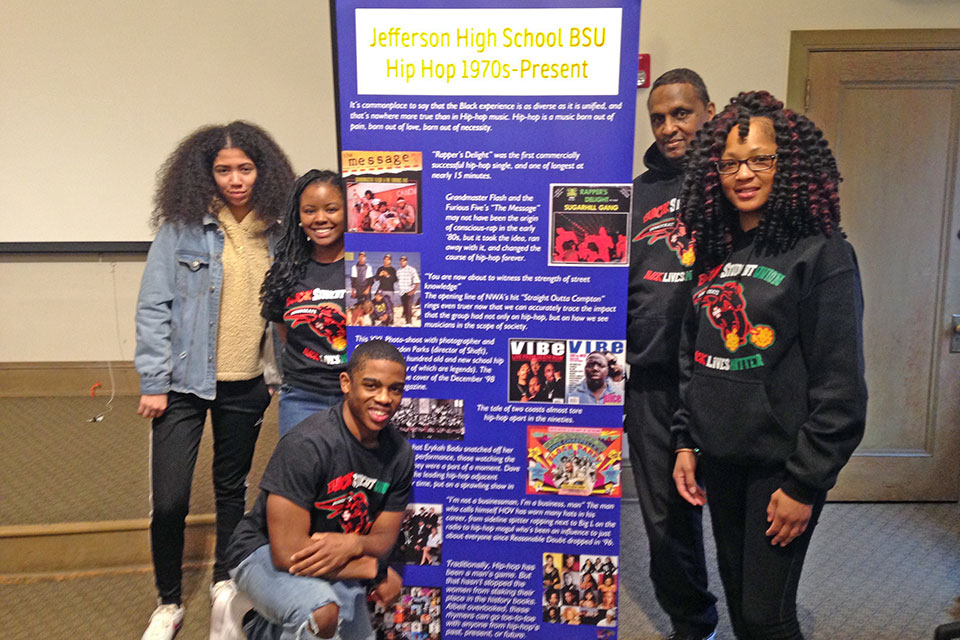 Presented by World Stage Theatre, the region’s first annual Black History Festival NW had its inaugural kick-off on Feb. 1 with a number of youth-curated exhibits at Multnomah County Libraries.

Their knowledge will be tested in the Jeopardy-inspired game show “How Well Do You Know Your Black History,” held at Jefferson High School on Feb. 17. The winning school will receive a $500 cash prize toward their Black Student Union.

Setting up Jefferson’s ‘Hip Hop’ display at the North Portland Library last Thursday, senior student Dyamond, 17, said that the festival’s goals largely echo the work of their student union – from community building to honoring Black Excellence, which is the pillar of her high school’s Black History celebration.

Every day during the month of February, Jefferson will recognize an African American student for their merits – from good grades to goodwill.

“We have staff members that we’ll be honoring too, because they do a lot for us and don’t always get recognized,” Dyamond told The Skanner.

Jefferson joins others like Roosevelt High School in hosting Black History Month assembles throughout the month.

Alongside the library exhibits – on display for the duration of February – the Black History Festival NW will span from Troutdale to Beaverton, combining arts, education and advocacy at its heart through a number of culturally-specific events.

According to its director Shalanda Sims, the festival grew out of World Stage Theatre’s production of “Who I Am Celebrating Me,” a long-running stage play that celebrates Black culture.

Sims, who is also the founder and artistic director of World Stage Theatre, said the festival will expand upon the production’s message of truth, unity and hope, which “transcends perpetual negative images portrayed by mass media and the criminal justice system.”

“More and more through social media, African Americans and people of color in general are seeking safe spaces to attach themselves to, as well as organizing small events to gather and celebrate,” Sims told The Skanner.

The festival’s theme ‘Standing at the Forefront of Change’ is an extension of this year’s national Black History theme ‘African Americans in Times of War’ – a framework for Black stories from the centennial of World War I’s closure to the current War on Terrorism.

In addition to the 12th annual performance of “Who I Am Celebrating Me” (Feb. 11 – 12), festival highlights include a month-long Black History Scavenger Hunt, gospel service, book fair, and a screening of the highly anticipated Marvel movie “Black Panther.”

On Feb. 24, the Black History Festival NW will wrap a month of celebration with the Unity Gala at Self Enhancement Inc. With keynote speaker Jemele Hill – journalist and co-host of ESPN’s Sports Center 6 – the gala will exhibit works and products of local Black artists and vendors.

The festival, whose sponsors include Oregon Metro and the Regional Arts and Culture Council, is also aiming to bridge economic, social and generational gaps through its programming.

“What Portland, in my mind, has done is destroyed the Black community,” said Pettifort. “And by doing that, what once connected us – the elders and the youth – that doesn’t exist anymore.”

“So that’s what the festival is for, to bring the young people, the old people, and everybody in-between back together to celebrate what it means to be Black in a place that doesn’t allow us to do it,” he continued.

Pettifort added that while Portland is widely a place that proclaims “Black Lives Matter,” it means little if the Black community, and especially its youth, doesn’t adhere to it.

“Every student at Jefferson High School has to believe that Black lives matter,” said Pettifort. “If they don’t, then we’re spinning our wheels.”