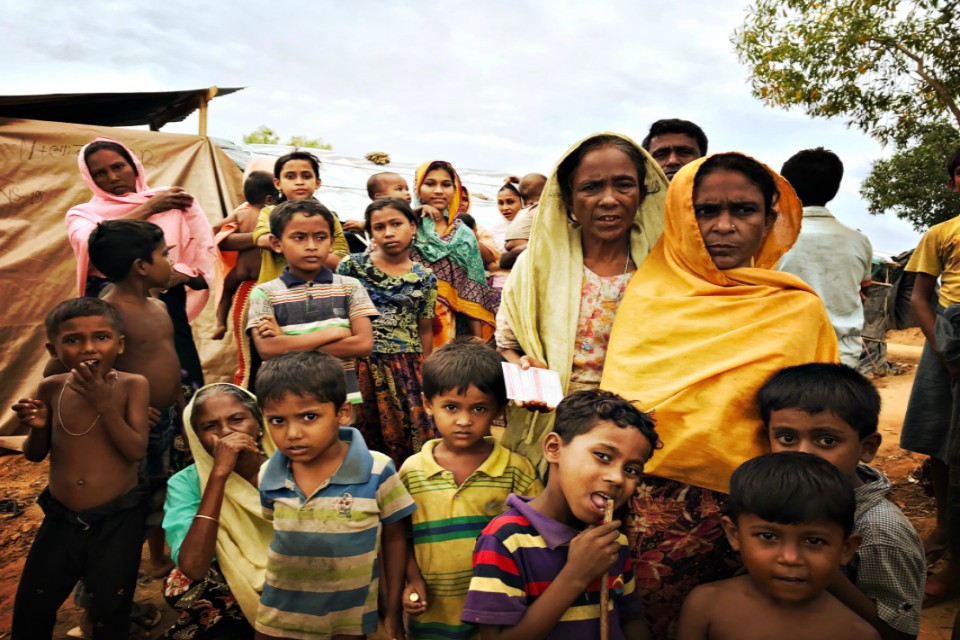 To date, more than 650,000 members of the minority Muslim Rohingya community have taken refuge at the Kutupalong camp in Cox’s Bazar in southern Bangladesh.

In the final week of August 2017, hundreds began making the deadly journey over the mountains from their homes in Myanmar’s northern province of Rakhine, after facing persecution at the hands of the Myanmar military in the form of systematic rape, murder and arson.

The United Nations have called the brutality against the Rohingya a campaign of “ethnic cleansing” – yet almost six months into the crisis, little has been done in the way of international intervention.

On Jan. 23, the gradual repatriation of the Rohingya from Bangladesh to Myanmar was set to begin, after an agreement was signed back in November. It’s since been postponed amid fears that the return of the refugees would be neither safe nor voluntary.

The same day, several U.S. Senators, including Oregon’s Jeff Merkley and Ron Wyden, introduced a bipartisan Senate resolution condemning the Myanmar campaign of ethnic cleansing against the Rohingya and calling for the “safe, dignified, voluntary and sustainable return” of the refugees.

Pfeil – whose work as a midwife with MSF has taken her to South Sudan, the Ethiopian-Somali border, Haiti, and Papa New Guinea – spoke with The Skanner on her experiences with Rohingya refugees in Bangladesh. This interview has been edited for space and clarity.

The Skanner News: What was your first impression when arriving at the Kutupalong refugee camp?

Aerlyn Pfeil: It’s a stark contrast. The camp is an ocean of plastic sheeting and bamboo sticks and feces and mud. It kind of looks like hell on earth, honestly. And then you have the beautiful landscape of the forest and Myanmar mountains. My first couple of days I spent out on the berm – this narrow strip – waiting for the border to be opened for people to cross over. There were about 14,000 people over that period of a couple days. It was a piece of land about as wide as one car lane and a mile and a half long, and it was just packed with thousands of people with nothing, because most everyone fled with whatever they had on.

For a lot of them, it’s the first time they’ve ever had healthcare, so there’s a big education gap in understanding the free services. Certainly, there was sometimes a lack of awareness that we even existed at the camp. Part of that was due to how large the camp is and how hard it is to navigate. When we imagine a refugee camp, we often think of a flat expansive area with rows of tents. The Kutupalong camp doesn’t look like that at all. It’s these steep hillsides that are all sand. The tents are stacked up on each other and the pathways go all over the place. There’s no real organization. I got lost in the camp a couple of times; so did colleagues. Patients were afraid to leave their shelters because they feared they wouldn’t find their way back again.

TSN: What did your days as a health worker at the camp consist of?

AP: Essentially, we realized straightaway that there was going to be an influx of women who needed services and post-rape care. The camp is about 65 percent women and children. We had heard stories of mass rape – and in any crisis, we know that violence towards women is likely to be higher. So MSF made the decision that they wanted to increase their sexual and gender-based violence (SGBV) services. So I arrived at the Bangladesh camp to set up that program.

We were rapidly building health posts inside the camp and building another inpatient and maternal health department in another section of the camp, called Baloo Kali. I wanted to have a midwife in all of those places that could be the first line of response. It can take a couple of hours to walk through the camp to get to the hospital or a health post. And if it’s too hard for women to find the care that they need, then they won’t seek that care out.  I trained probably around 300 staff, including the outreach workers. We had a mobile health team that was working on the border and in the section of the camp we called reception, where people spent their first couple of days waiting to figure out where in the camp they’re going to be placed.

TSN: How does the work of a midwife in these types of crisis situations crossover into sexual violence care?

AP: MSF has a really large maternal health program, which is antenatal and postnatal care, as well as family planning and labor and delivery. Traditionally, at least for us, it’s usually the midwives that are providing care for sexual violence victims. It’s often so stigmatized and hidden that it’s a lot easier in some contexts if it’s incorporated into the overall maternal health program, because you can walk in and say, “I need to see a midwife,” without having to say, “I was assaulted.”

TSN: What was the condition of many of the women and children that you attended to at the camp?

AP: Not as bad off as I would have expected, actually. A lot of malnutrition and dehydration, and in the first couple of days of arrival a lot of minor wounds and infected feet because of crossing through the jungle and not having shoes. But I think part of the reason people weren’t in a more dire condition is because they fled right away. That being said, the Rohingya that are still in central Rakhine haven’t left yet. And I would imagine, if and when they do, their conditions will be worse. Also, a lot of people died in the mountains trying to cross because it took three to ten days to get to the border. I was struck by how few elderly there were, and when I asked questions about that a lot of people said that they died on the way.

TSN: Around how many of the female refugees were victims of sexual violence?

AP: We started to see pretty rapidly an increase in our numbers. By the time I left, I believe we had seen around 200 between Aug. 25 and the end of November. So we probably had between 10 and 15 a week coming in – and those numbers climbed as more people became aware of our services. In terms of the number of women that were assaulted, it’s hard to say. We know that the number of women coming forward is a lot less than what is actually out there. When I was working to set up services, part of that is gaining some understanding of what cultural norms are around assault. In Ethiopia, the common response is, if you were assaulted then you were married to the perpetrator. That’s how the shame of being raped for the family is resolved.

In Bangladesh, I spent quite a bit of time talking to women in the community, as well as the health workers that I had hired and trained,  about what the norm is. What is the response, and how should we be handling the nuances of these cases? In all the settings that I’ve worked, rape has never been so easily discussed. In asking about that, it was because the assaults were perpetrated by the military of Myanmar. It was so systematic that there was an air of, “We all share this shame, so it’s easier for us to come forward.”

For me, most disturbing, is that the assaults were really brutal. I had women who watched their husbands have their heads cut off, or were shot in front of them, and then dragged into their hut and raped by multiple men. Sometime those huts were set on fire. I spoke with a few of these women, so obviously some escaped and immediately fled, which meant that a lot of families were separated.  I had one woman tell me a story about watching pregnant women have their bellies cut open. Younger women seemed to be targeted. They were often taken back to the military camp and kept for 24 hours, or a couple of weeks, and raped repeatedly by several men. Most of the Rohingya population has no access to health care, which also means there’s no access to family planning, so plenty of women who were assaulted are now pregnant.

Aerlyn Pfeil teaches at the Birthingway College of Midwifery in Portland, Ore. and is on the board of directors for Doctors Without Borders.