US Government Shuts Down Amid Partisan Blame Game 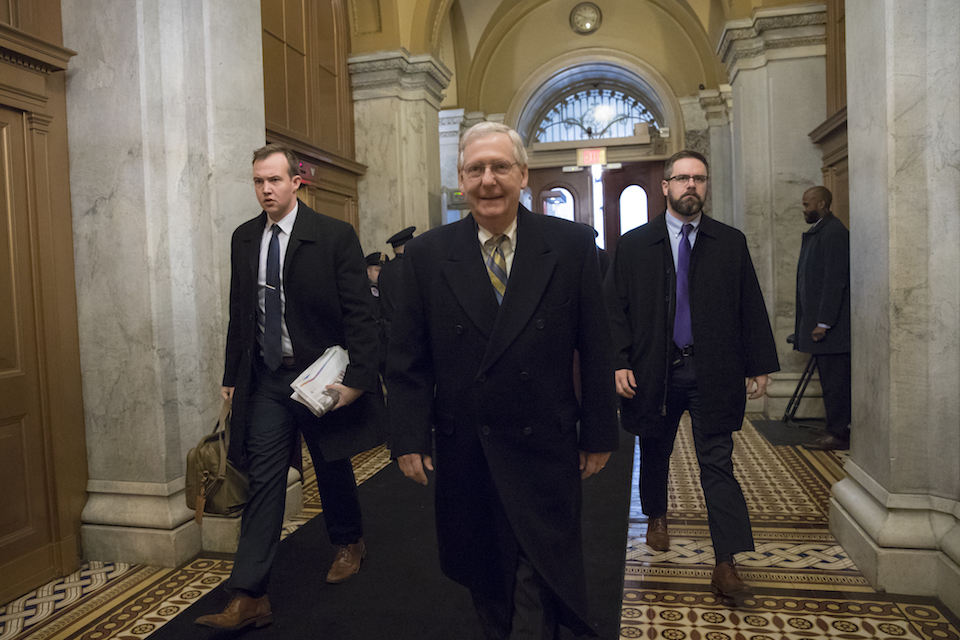 WASHINGTON (AP) — The federal government shut down at the stroke of midnight Friday, halting all but the most essential operations and marring the one-year anniversary of President Donald Trump's inauguration in a striking display of Washington dysfunction.

Last-minute negotiations crumbled as Senate Democrats blocked a four-week stopgap extension in a late-night vote, causing the fourth government shutdown in a quarter century. Behind the scenes, however, leading Republicans and Democrats were trying to work out a compromise to avert a lengthy shutdown.

Congress scheduled an unusual Saturday session to begin considering a three-week version of the short-term spending measure — and to broadcast that they were at work as the shutdown commences. It seemed likely each side would try forcing votes aimed at making the other party look culpable for shuttering federal agencies.

Since the closure began at the start of a weekend, many of the immediate effects will be muted for most Americans. But any damage could build quickly if the closure is prolonged. And it comes with no shortage of embarrassment for the president and political risk for both parties, as they wager that voters will punish the other at the ballot box in November.

Social Security and most other safety net programs are unaffected by the lapse in federal spending authority. Critical government functions will continue, with uniformed service members, health inspectors and law enforcement officers set to work without pay. But if no deal is brokered before Monday, hundreds of thousands of federal employees will be furloughed.

After hours of closed-door meetings and phone calls, the Senate scheduled its late-night vote on a House-passed plan. It gained 50 votes to proceed to 49 against, but 60 were needed to break a Democratic filibuster. A handful of red-state Democrats crossed the aisle to support the measure, rather than take a politically risky vote. Four Republicans voted in opposition.

In an unusual move, Senate Majority Leader Mitch McConnell allowed the roll call to exceed two hours— instead of the usual 20 or so — and run past midnight, seemingly accommodating the numerous discussions among leaders and other lawmakers. Still as midnight passed and the calendar turned, there was no obvious off-ramp to the political stalemate.

Even before the vote, Trump was pessimistic, tweeting that Democrats actually wanted the shutdown "to help diminish the success" of the tax bill he and fellow Republicans pushed through last month. White House press secretary Sarah Sanders later termed the Democrats "obstructionist losers."
Democrats balked on the measure in an effort to pressure on the White House to cut a deal to protect "dreamer" immigrants — who were brought to the country as children and are now here illegally — before their legal protection runs out in March.

The president watched the results from the White House residence, dialing up allies and affirming his belief that Democrats would take the blame for the shutdown, said a person familiar with his conversations but not authorized to discuss them publicly.

Predictably, both parties moved swiftly to blame one another. Democrats laid fault with Republicans, who control both chambers of Congress and the White House and have struggled with building internal consensus. Republicans declared Democrats responsible, after they declined to provide the votes needed to overcome a filibuster over their desire to force the passage of legislation to protect some 700,000 younger immigrants from deportation.

Earlier Friday, Trump had brought Schumer to the White House in hopes of cutting a deal on a short-term spending agreement.

The two New Yorkers, who pride themselves on their negotiating abilities, started talking over cheeseburgers about a larger agreement that would have included greater military spending and money for a southern border wall.

But the talks fell apart almost as abruptly as they started. In a phone call hours later, the president raised new concerns about the deal he and Schumer had discussed, according to a person familiar with the conversation. In a subsequent phone call with Schumer, chief of staff John Kelly said the deal discussed was too liberal. The White House did not immediately comment on that account.

Budget Director Mick Mulvaney told CNN that "Not much has changed" over the course of the day, but he predicted a deal would be reached by Monday, when most government offices are to reopen after the weekend.

Democrats in the Senate had served notice they would filibuster the government-wide funding bill that cleared the House Thursday evening. They were seeking an even shorter extension that they think would keep the pressure on the White House to cut a deal to protect the "dreamer" immigrants.

"We will not negotiate the status of unlawful immigrants while Democrats hold our lawful citizens hostage over their reckless demands," Sanders said in a statement.

Trump first described his discussion with Schumer as an "excellent preliminary meeting," tweeting that lawmakers were "making progress - four week extension would be best!" But that optimism faded as the evening wore on. McConnell did not attend the meeting because he was not invited, a Senate GOP aide said.

Trump had been an unreliable negotiator in the weeks leading up to the showdown. Earlier this week he tweeted opposition to the four-week plan, forcing the White House to later affirm his support. He expressed openness to extending the Deferred Action for Childhood Arrivals program, only to reject a bipartisan proposal. His disparaging remarks about African and Haitian immigrants last week helped derail further negotiations.

Trump had been set to leave Friday afternoon to attend a fundraiser at his Palm Beach, Florida, estate marking the one-year anniversary of his inauguration but delayed his travel.

As word of the Schumer meeting spread, the White House hastened to reassure Republican congressional leaders that Trump would not make any major policy concessions, said a person familiar with the conversations but not authorized to be quoted by name.

On Capitol Hill, McConnell said Americans at home would be watching to see "which senators make the patriotic decision" and which "vote to shove aside veterans, military families and vulnerable children to hold the entire country hostage... until we pass an immigration bill."

"We can't keep kicking the can down the road," said Schumer, insisting on more urgency in talks on immigration. "In another month, we'll be right back here, at this moment, with the same web of problems at our feet, in no better position to solve them."

The four-week measure would have been the fourth stopgap spending bill since the current budget year started in October. A pile of unfinished Capitol Hill business has been on hold, first as Republicans ironed out last fall's tax bill and now as Democrats insist on progress on immigration. Talks on a budget deal to ease tight spending limits on both the Pentagon and domestic agencies are on hold, as is progress on a huge $80 billion-plus disaster aid bill.

A shutdown would be the first since 2013, when tea party Republicans — in a strategy not unlike the one Schumer is employing now — sought to use a must-pass funding bill to try to force then-President Barack Obama to delay implementation of his marquee health care law. At the time, Trump told Fox & Friends that the ultimate blame for a shutdown lies at the top. "I really think the pressure is on the president," he said.

Arguing that Trump's predecessors "weaponized" that shutdown, Mulvaney said Friday the budget office would direct agencies to work to mitigate the impact this time. That position is a striking role-reversal for the conservative former congressman, who was one of the architects of the 2013 shutdown over the Affordable Care Act.