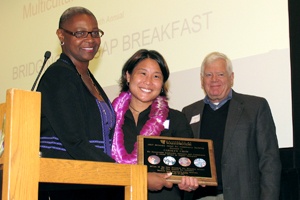 When Jennifer Nash began her studies at the University of Washington, majoring in Retail Management and American Ethnic studies, an athletic scholarship in track and field helped her pay for her education. But in her second and third year, she suffered serious injuries that brought her running career to a standstill. Without the scholarship money, Nash needed a job and the help of her Delta Sigma Theta sorority sisters in order to continue her education.
Last Saturday, at the Bridging the Gap breakfast, organized by the university's Multicultural Alumni Partnership, Nash was awarded the MAP-Macy Retail Management scholarship. Now the senior, who was raised in Sacramento, looks set to become the first member of her family to earn a college degree.
More than 700 people gathered at the University of Washington in Seattle for the 13th annual Bridging the Gap Breakfast. Hosted by the Multicultural Alumni Partnership, in collaboration with the UW Alumni Association and the Office of Minority Affairs, the event was billed as a celebration of diversity at the University of Washington and of the achievements of distinguished alumni.
Distinguished alumni awards went to Harold G. Booker, Ruthann Kurose, and Rogelio Riojas. The Vice Provost for Diversity Community Building Award went to Carolyn Chow. Phil Lane, Jr. was presented with the Dr. Samuel E. Kelly Award.
Six students, including Jennifer Nash, received scholarships that are intended to help economically disadvantaged students.
"I really feel so blessed to know that people are supporting me out there," Nash said. "I just really am thankful for it."
Despite working and going to school, Nash has still found time to volunteer. With her sorority she has been actively involved in helping young girls of color.
"There are a lot of young girls who don't have family members who went to college, and they just don't have the guidance of a mentor who can help them out," said Nash. "I know that I needed examples when I was growing up, so it means everything to me to give back to young girls so that they can have an opportunity to go to college like I did."
Yordanos Fesehaye, a junior majoring in the Comparative History of Ideas, was this year's recipient of the Owen G. Lee Scholarship. Fesehaye was born in Eritrea, a country on the coast of Eastern Africa, but was forced to leave at a very young age because of a war that devastated the country over a period of 30 years.
She is the first member of her family to attend either high school or college. She's grateful for this opportunity, she said.
"Being a first generation student here I'm actually given the opportunity that a lot of my family members have died for. And that's just the opportunity to go to school and provide for my family."
Fesehaye recently returned to Eritrea as part of an independent study-abroad program where she traveled overland through nine countries, from Cairo, Egypt to Cape Town, South Africa. "What impacted me the most was seeing my family, my cousins, my relatives that are my age," recalled Fesehaye. "And seeing the difference in opportunity that we have. By studying abroad, I was able to open my mind and see social issues on such a larger scale."
Fesehaye says she is hoping to pursue a career in education, and more specifically, she plans on returning to Eritrea to start an educational program and school for orphans. She currently is volunteering with Upward Bound, a college-prep organization for low-income and first-generation high school students.
"I was in the program for four years and now I'm working with the program," she said.
About winning the scholarship, Fesehaye said, "It's more than just an opportunity; it's a blessing because finances are a big obstacle in college for me personally, and this will allow me to really focus on my studies."
Other scholarship recipients included: Julie Kang, Ph.D. candidate in Education; Kristy Katzenmeyer, Ph.D. candidate in bioengineering; Donna Neagle, a nursing major; and Wilfredo Sanchez, an architecture major.

AMARA RUSSELL is a student in the University of Washington Department of Communication News Laboratory.