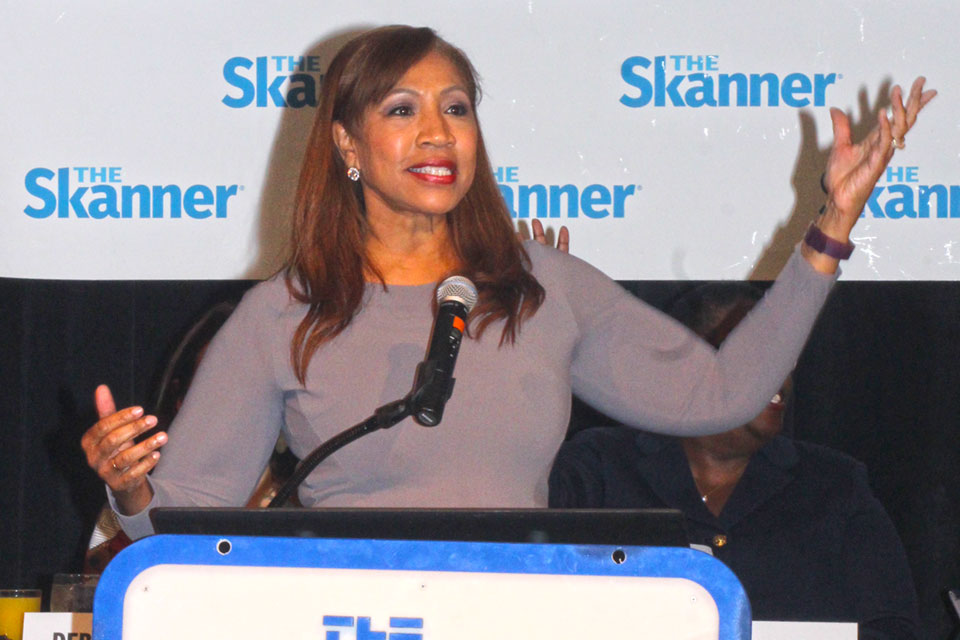 About 1,000 people gathered Monday at the assembled crowd of 1,000 at the Red Lion Hotel on the River on Hayden Island for the breakfast, which was keynoted by Cheryl Grace, the senior vice president of U.S. strategic community alliances and consumer engagement at Nielsen. Mayor Ted Wheeler, Gov. Kate Brown and Daisy Santos, corporate trainer at Northwest Natural all shared brief remarks at the beginning of the event, as did representatives from several sponsoring organizations.

“I cannot recall a time in our history more urgent than right now. Our nation is at a crossroads,” Wheeler said. “Now more than ever, we must take Dr. King’s words to heart.”

Grace started her keynote address with a five-question survey about Black culture. After asking the audience to fill in the blanks on the aphorism “Black don’t crack” and asking where Black people go for therapy (church), Grace remarked her adult son knew the answer to every single one of the questions on the list, even though she didn’t recall explicitly teaching him any of them.

“Black culture is bigger than all of us,” Grace said. “Being Black is kind of cool.”

At Nielsen Grace has spearheaded several years of research on Black consumers and their influence on consumers of other races. At the same time African Americans are regarded as tastemakers, Grace said, conversations about the Black experience are increasingly about something else: fear.

“Lately when any conversation about African Americans is had, it’s about fear. It’s about what we are afraid of or who is afraid,” she said.

Grace shared a personal story about a woman at a wedding in her family who was 80 years old and, on seeing a multiracial group gather for photos at a family wedding between an African American woman and an Asian American man, “freaked out.”

According to Grace, Aunt Ruth started running people off the stage, saying, “This is family only, get off the stage” -- until the bride approached her and told her, “Aunt Ruth, it’s OK. It’s OK. They’re all family.”

“The changing demographics of my family scared the bejeesus out of Aunt Ruth, but Aunt Ruth isn’t the only one who’s scared. These numbers are scary to millions of people. They are disconcerted. Some may feel it’s un-American,” Grace said.

The actual Aunt Ruth has little power. But the Aunt Ruths of the world are pushing back against the change they see, she said.

Grace said until recently, she would read about or watch stories of bigotry in the world and assume somebody would speak up and push back. Without mentioning President Trump by name, she referred to his recent comment referring to predominantly Black countries as, in her words, “bleephole countries,” and asked why no one pushed back against him in that room that day.

Grace urged the audience to move past fear and leverage their power as consumers and business leaders, to use social media, networking organizations and churches to start organizing.

A broadcast of the entire breakfast will also air on Open Signal Portland Community Media later this month. For more photos from the breakfast, click here.