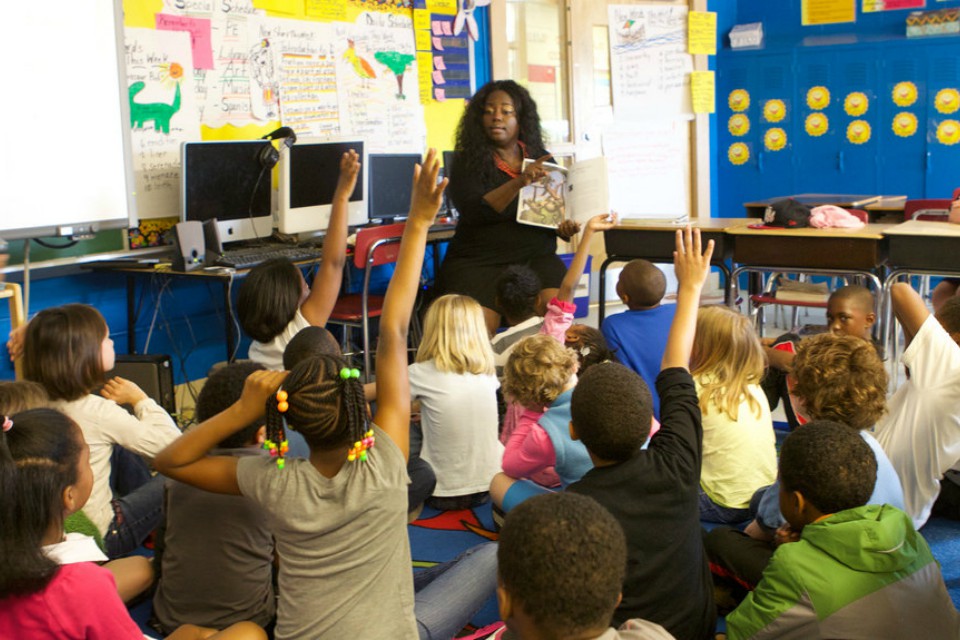 At De La Salle North Catholic High School, most students would be hard pressed to find a teacher that looks like them. Eighty-six percent of the student body at the North Portland private school are students of color. Conversely, 78 percent of its staff is White.

“There’s a challenge there,” said principal Tim Joy, who added that his school is actively training teachers in culturally sensitive practices and critical race theory.

Even so, Joy told The Skanner he receives little response from his students on wanting to become teachers themselves.

Yet a school like De La Salle, whether private or public, is not singular in a state that is overwhelmingly White – at 87 percent. North Portland’s Jefferson High School – Oregon’s only remaining majority-Black public high school – has high percentages of students of color, around 70 percent, while teachers of color are scarce.

According to 2016 figures from the Chief Education Office, in public schools across the state, just 10.2 percent of teachers and 10.9 percent of administers are of people color, or speak English as a second language; while 36.6 percent of all students are minorities.

Diversifying the pool of educators

With today’s teacher workforce falling sorely short of representing its student body, the Equitable Education Program at Meyer Memorial Trust is working to diversify the pool.

Through a recent grantmaking round, Meyer is helping to fund a program called Project LEAD (Leadership for Equity and Diversity), as part of the Educational Leadership & Policy department, within the Graduate School of Education at Portland State University.

The program, which is set to launch in 2018, will train mid-career teachers of color to earn an administrator licensure. From there, they can become assistant principals and eventually superintendents.

Project LEAD is also placing special focus on recruiting teachers from several school districts where the percent of students of color is particularly larger than the percent of non-White administrators.

“Administrators have a lot of influence over programs and curriculum and opportunities for culturally and linguistically diverse students,” Susan Carlile, associate professor with the ELP department, told The Skanner.

“Seeing a person who looks like them in leadership roles is terrific modeling for anybody, especially for people who have been under-represented in the teaching and administrator workforces.”

Statewide, only 11.5 percent of candidates enrolled at Oregon’s nine administrator preparation programs for the 2014 – 15 school year were racially and culturally diverse, according to the Chief Education Office.

The following year, the office noted that there were 226 administrators of color employed in Oregon.

In fact, out of racially diverse principals employed in Oregon public schools in 2015-16, only 2 percent are Black, 1 percent are Asian, and 5 percent are Hispanic. Ninety percent are White.

Carlile and her new program are striving to balance those numbers.

“We’re not going to sit back and wait for people to come to us,” Carlile said. “We’re going to actively communicate and collaborate with the superintendents in those districts we identify.”

The districts will then provide potential candidates for the program, which will also offer application assistance as well as some financial aid.

In addition to the grantmaking, Meyer’s Equitable Education Program recently commissioned a review that highlighted 11 components of educational equity.

Its second chapter, “Teachers of Color in Classrooms and the Impact on Students of Color,” examines not only the lack of racial diversity within Oregon’s K-12 teacher workforce, but also how it impacts students of color.

Students and teachers who look alike

A 2015 study by Egalite, Kisida and Winters, cited in Meyer’s review, found that “the underrepresentation of minority teachers in schools could be a contributing factor to the racial test score gap in the United States.”

Adding to that, recent evidence shows that students with teachers that look like them might, in fact, perform better in school.

A study called “The Effects of Teacher Match on Students’ Academic Perceptions and Attitudes,” published in June by Educational Evaluation and Policy Analysis, surveyed six US school districts to estimate how demographically similar teachers affect students on everything from their academic efforts to their happiness and confidence in the classroom, the quality of their communication with teachers, and even their college aspirations.

It found that where students and teachers matched in both gender and race/ethnicity, the outcomes were considerably more positive; particularly where Black students, and especially Black girls, were concerned.

When she first started at Portland Public Schools, where she taught middle school social studies and language arts, she was gifted the libraries of two retiring teachers.

“Immediately I went through all the books and pulled out probably 40 books that had culturally damaging, stereotypical Native American characters that were written by White people and being promoted to students of color,” Sabzalian told The Skanner.

But for her, that was just one daily example of being a teacher of color and interacting with “White teachers who are less culturally response, or have a lack of personal knowledge around what it is to be a student of color and a parent of color engaging in K-12.”

Sabzalian attributes Oregon’s shortage of teachers of color to a cyclical factor – having a lack of educators of color does little in the way of inspiring students of color to become teachers themselves.

“Those role models are lacking for a lot of kids of color who grow up in Oregon, so that pipeline is smaller,” said Sabzalian. “And as we have less kids of color graduating in Oregon than White students, that also makes the pool smaller.”

Again, according to figures from the Chief Education Office, in 2014 – 15 there were only 386 racially diverse teacher candidates enrolled in Oregon’s 17 teaching preparation programs – compared to 1,636 White candidates.

Among a handful of state-funded programs aimed at increasing teacher effectiveness is TeachOregon PAC. The program works to intentionally increase the number of diverse teachers by recruiting would-be teachers as early as middle school, placing special emphasis on young minority students. Through TeachOregon PAC, students can later enroll in 4-year and 2-year teaching programs at partner colleges and universities.

Hiring practices at the heart of it

Some Oregon school districts have already committed to hiring more teachers of color, as recent data shows that over 7 percent of the state’s licensed educators – who are not currently employed in a public school – are people of color.

The group reports that a number of Oregon school districts are offering its faculty anti-bias interview training.