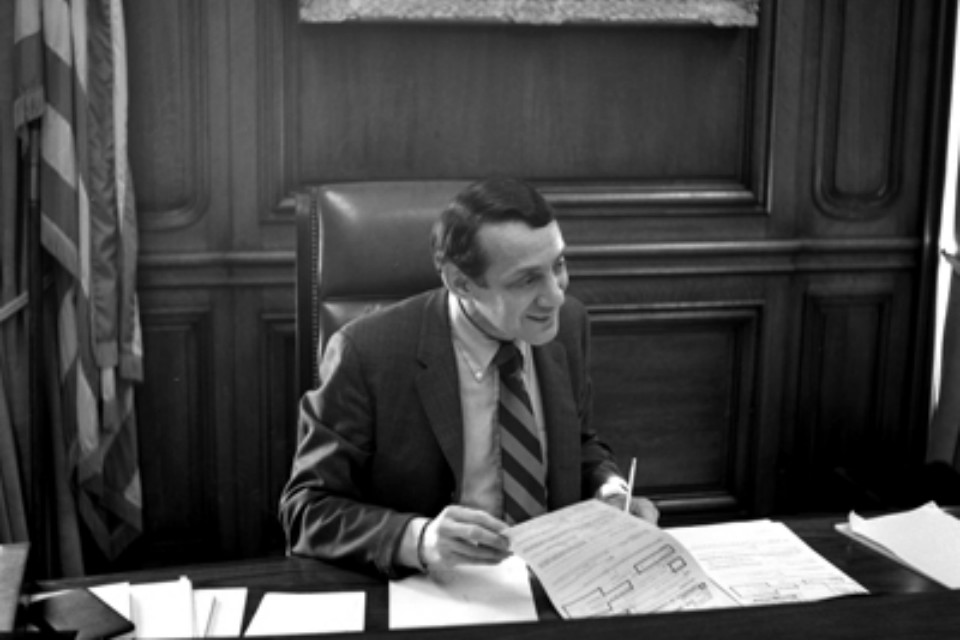 PORTLAND, Ore. (AP) — When the movie "Milk" reached theaters in the West African country of Togo a few years ago, Jean Pierre Nugloze made sure to go.

"I don't know how to say it," Nugloze said. "It was very emotional, because I am a gay man and was a gay activist too."

Today, Nugloze sells colorful African art, clothing and bags out of a small store on Portland's Southwest Stark Street. It's part of a 13-block stretch where a coalition of community groups want to rename to honor Harvey Milk.

Advocates of the renaming say it will send a message to members of the LGTBQ community in Portland — and other parts of the state and nation.

"No matter how progressive Portland the city may be, it is a very small piece of the Oregon pie," said Lisa Schroader, the chef and owner of Mother's Bistro, a restaurant on Southwest Stark.

"There are many youths that feel disenfranchised even today. And to be able to look up to a street named after someone who was gay, openly gay, it kind of gives them something to aspire toward."

It's also a chance to provide a history lesson for a generation that may not understand how rapidly the country's attitude toward gays and lesbians has progressed.

"For millennials who grew up in Portland or maybe in the Bay Area, they may have grown up with no idea of what the world was like," said Tyler TerMeer, executive director of the nonprofit Cascade AIDS Project.

"Twenty-five years ago, it was a different place completely. Many of us waited anxiously to see the first gay kiss on television...Honoring Harvey Milk is a chance to talk about how far we've come and what's left to do."

The actual renaming idea came from former Oregon Gov. Barbara Roberts. She was in San Diego with friends a few years ago to speak at the city's annual Harvey Milk Diversity Breakfast. Schroeder said Roberts and friends stopped to take a picture under a sign marking Harvey Milk Street.

"A light bulb went off in their heads and they said, 'You know, Portland, we have streets named after great figures. But where is the LGBTQ leader of the community?'" Schroeder said.

Street re-namings don't happen often in Portland — and when they do, they're usually complicated by issues of race, class and politics.

Back when city leaders worked to rename Union Avenue after Martin Luther King Jr. in the late 1980s, more than 37,000 people signed a petition in opposition.

The quest to name a city street after labor organizer Cesar Chavez almost a decade ago took several years to achieve. Business owners on Interstate Avenue and Southwest Fourth Street objected to changing their addresses.

The City Council eventually agreed to rename 39th Avenue after Chavez but only after months of squabbling that culminated in Mayor Tom Potter storming out of a meeting and declaring himself "irrelevant."

Milk Street organizers picked this part of Stark Street because it was once the heart of Portland's gay nightlife. They've heard little pushback to the idea of renaming a road that's already named for someone else: Benjamin Stark was one of Portland's founding fathers; he was also an unapologetic racist who advocated for slavery.

Supporters have, however, faced questions about their choice.

The short answer: City rules about who can be honored with a street name are quite strict.

"One of the rules is that the person has to have been dead for five years," Schroeder said. "The person also has to be a household name."

Name change supporters say they hope to put up reminders of other, less famous LGBTQ pioneers along Stark Street, perhaps with plaques or benches.

And while Milk is something of a compromise, they say he's a fitting one. He was one of the first openly gay people elected to public office in the United States, and a champion for the notion that being out and proud was the best way to overcome bigotry.

He helped successfully kill California's Proposition 6, which would have barred gay people from working as school teachers, and helped pass a San Francisco city ordinance ensuring equal rights for gays and lesbians.

Nine days before he was assassinated in 1978, Milk made a tape with instructions that it be played only after he died.

"I'd love to see every gay doctor come out, every gay lawyer, every gay judge, every gay bureaucrat, every gay architect come out and stand up and let the world know," Milk said in the tape.

"That would do more to end prejudice overnight that anybody can ever imagine."

Portland city rules provide two ways to start the process to re-name a street: You can collect a percent of property owners to say yes or collect 2,500 signatures.

Milk Street organizers are going the signature route. They haven't been able to get that critical mass of property owners to agree.

"The problem is that renaming a street involves so many logistical hassles for business owners," said Greg Goodman, whose family company owns buildings, parking lots and garages downtown. "It's just time-consuming and costly."

Those costs include changing business cards and signs. Goodman said he's just against most street re-namings on general principle.

"Philosophically, I have no problem with Harvey Milk," he said. "But I would look at it as, 'How do I do a park? How do I do a statue? How do I pay some other tribute to somebody that deserves a tribute?'"

Still, Goodman said he won't actively fight the effort. After all, arguing against honoring an assassinated gay rights leader in super-progressive Portland is, after all, a risky political fight.

Signature gathering could start this winter. The City Council could vote by summer.

Back on Stark Street, in his small, colorful boutique, Jean Pierre Nugloze can't wait. He doesn't care that Harvey Milk wasn't from Oregon.

"This idea means a lot to me, because people have fought for gay freedom, so this gives them respect," he said. "This sends a message."