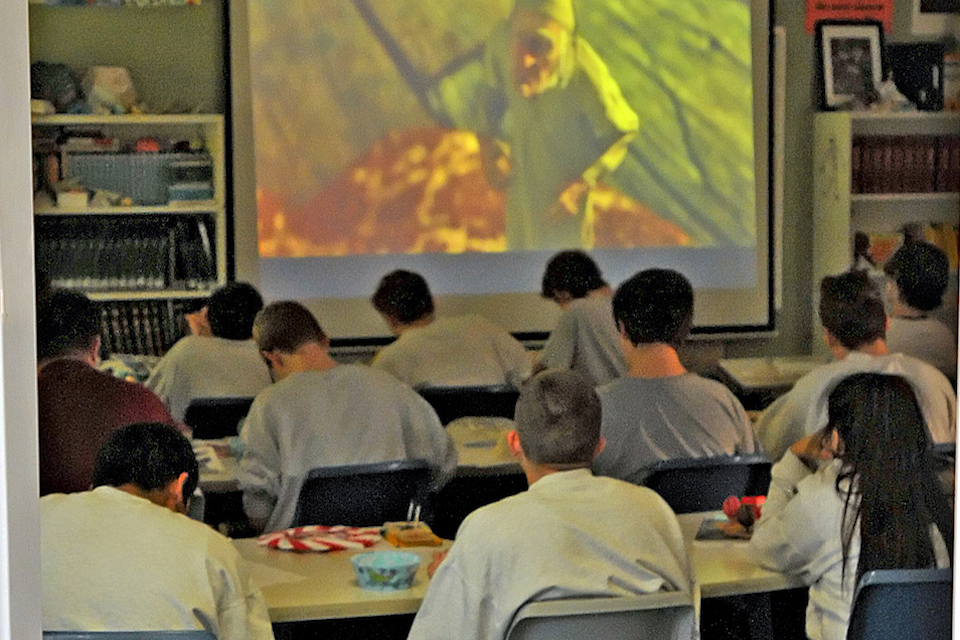 No one knows exactly why youths are committing fewer crimes, but those who work with juvenile offenders in Jackson County believe creating targeted plans for offenders is yielding better results than simply locking kids up.

"We've moved away from a punishment system to helping kids," says Jackson County Juvenile Services Deputy Director Joe Ferguson. "In the 1990s, the idea was to hold kids accountable and put the hammer down on them. We did that with a lot of kids and it didn't change kids. Now we look at what works with kids."

In the 2005-06 fiscal year, Jackson County tallied 2,371 referrals to the county juvenile department. Referrals come from law enforcement and are analogous to arrests in the adult criminal system.

Total referrals rose to 2,872 in the 2007-08 fiscal year when the Great Recession hit, but then fell steadily in subsequent years, dropping to 947 last fiscal year, according to county data.

While juvenile crime has gone down significantly, the population of residents age 17 and younger has dipped by only 5 percent over the past 20 years in Jackson County, Ferguson says.

Some theorize an improving economy has allowed more teens to get jobs, keeping them out of trouble.

But state data shows teen employment is continuing a downward trend that has lasted for decades, offset by increased school and college enrollment, according to the Oregon Office of Economic Analysis.

"Although the reduction in juvenile crime is a national phenomenon and much research has been devoted to analyzing the reasons for the decline, there is no single widely accepted explanation for the reduction," the Oregon Youth Authority wrote in an October report.

Nationwide and in Jackson County, juvenile systems have adopted a more scientific approach, figuring out what problems kids have and then adopting tailored plans, Ferguson says.

About 12 years ago, the county started doing risk assessments for youths, predicting whether they fell into low, medium or high risk categories, he says.

According to a risk assessment form used by Jackson County Juvenile Services, the risk factors include:

At the same time other life situations have been shown to protect young people from breaking the law. Protective factors include:

"Then we never see them again," he says.

For minor issues, the county might leave it up to parents to punish kids, or send warning letters.

Some kids go through a diversion program, such as attending a class about the impacts of shoplifting and paying restitution, and then have their cases closed.

Youths can be placed on probation, or spend time in the county's juvenile detention center.

In more serious cases, they can be sentenced to the custody of the Oregon Youth Authority, which operates youth correctional facilities.

Youths who commit the most extreme crimes may see their cases shifted to Jackson County Circuit Court's adult court.

The county's juvenile services building on 10th Street in Medford houses courtrooms, offices, a 24-bed detention center and a 15-bed residential program that helps kids transition back into the community.

While Jackson County's adult jail regularly overflows, forcing the release of lower-risk inmates, the number of juvenile beds appears to be adequate.

"Originally, they were going to build a 60-bed facility," Ferguson says. "Forty has been plenty — which is good."

Cris Lopez, a juvenile justice specialist working in the detention center, said the goal is to hold youths accountable, but to have a less punitive approach.

"In 10 years, I've seen a lot of changes. I think we're headed in the right direction," he says.

Staff members have to show the youths that bad behavior will result in negative consequences.

"We have a couple of youth here on Measure 11 charges," Lopez says, referring to a voter-approved measure aimed at punishing violent criminals. "They are pretty aggressive youth who have committed pretty serious crimes. They are often gang-affiliated. With those kids, we try to stay on top of the negative, controlling behavior. We give them options that are more positive to choose from."

Sometimes they have to be isolated from others until their behavior improves, he says.

Staff members say they work to build rapport and model respectful behavior, even when the kids are not behaving respectfully toward them.

"As soon as we see them acting respectfully, we reward that behavior. As soon as they behave in a controlling, anti-social way, there's a consequence to that," Lopez says. "They learn right away what society is OK with and what society is not OK with."

Kids who do well in the detention center can transition into the residential program, which is called Barriers to Bridges.

Each youth is helped by a team which can include a case manager, their parents, a probation officer and — if needed — a mental health worker. Treatment groups address drug and alcohol use, anger issues and other issues, says Carmen Navarro, a juvenile justice specialist in the residential program.

The kids there also live in cells, but are more free to come and go from their rooms, which they can decorate. Their day use area has potted plants and other items not considered safe for the detention side of the facility. They do schoolwork in their own classroom.

Youths who do well in the Barriers to Bridges program receive passes for home visits and get to go on field trips. This weekend, youths who have behaved well are helping out with a Toys for Tots giveaway.

"They really excel and they're well-behaved," she says.

A big part of the job is helping kids think ahead about the potential consequences of their actions.

"Does the consequence make it worth it to do it again? I walk through the situations with them and ask them what they could have done differently. The aim is to slow down their thinking," Harris says. "Kids' behavior doesn't change overnight. It involves repeating a lot of the same things."

Learning anger management skills is key for many kids. She encourages them to think of situations that could cause them to become angry as "invitations."

"If someone gives you a dirty look in the hall, you can decide whether to respond to that 'invitation' and get angry. Invitations are like triggers. Kids can ask themselves, 'Do I accept this invitation or decline?'" Harris says.

The juvenile center runs a program in which youths can meet and talk with the victims of their crimes, which allows them to apologize and hear firsthand how their actions affect others.

"The kids are surprised at how often the victim cares about how they're doing. I've never had a kid come back from meeting with a victim with a negative reaction like, 'That was stupid,'" Harris says.

One unusual theory about falling juvenile crime rates is that kids are spending more time on their phones, rather than being out in the real world. Harris says she believes teens' cellphones may be a contributing factor to lower crime rates.

"They have their phones to keep them busy," she says. "They're not spending as much time with their friends in person. But phones can contribute to crime, like when they plan fights online. But we also find out about it online."

As the years go by, Harris says she is becoming even more positive about her job and the prospects for kids. She saw one youth out in the community who was putting his anger management and communications skills to use with co-workers and customers. She notes many adults don't even have those skills.

"I ran into him and he has a full-time job and is doing well," she says. "He said, 'If I hadn't had anger management, I would never be able to do this job.'"