Seeing the Big Picture as a Wildlife Ecologist 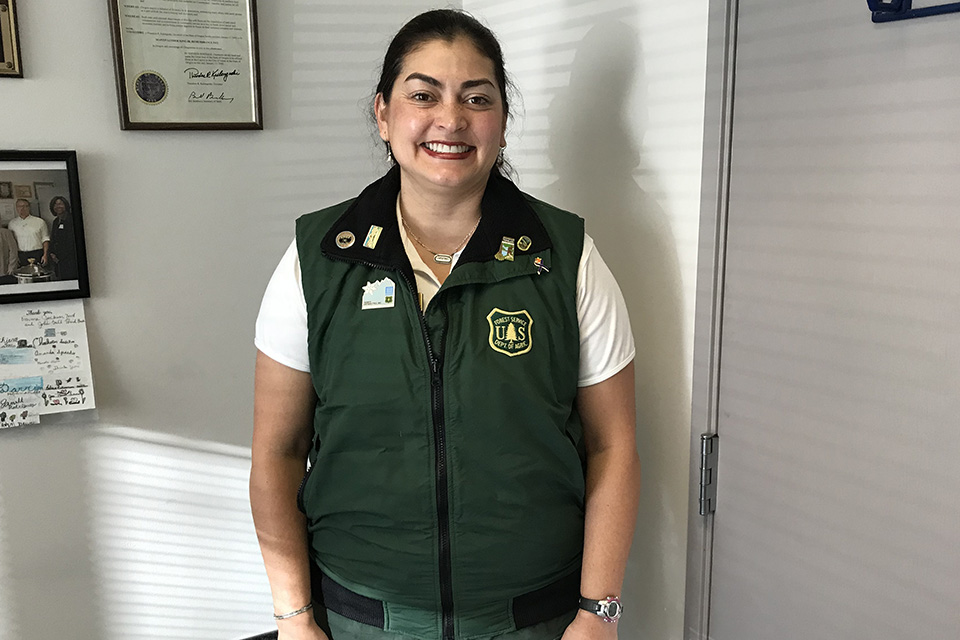 Barbara Garcia’s father was a wildlife biologist for the U.S. Forest Service, but she didn’t envision herself following in his footsteps.

Fascinated by science, Garcia originally planned to pursue a career in medicine – pediatric psychology to be specific. In college at the University of New Mexico, she majored in biology with a pre-med track and started working in the medical field. After a particularly stressful job at a psychiatric clinic “that dealt with some really ugly, ugly things,” Garcia began to consider other options.

She’d grown up loving the outdoors, and her father advised her to seek seasonal work in the Forest Service before settling on a definitive career path. She took a summer job as a fisheries technician in northern Idaho, assisting with hydrological surveys and fish surveys – and later went to graduate school at the University of Idaho’s wildlife program.

Garcia said her parents were initially disappointed when she announced she didn’t want to go to medical school, but ultimately supportive of her decision to transition to a career in wildlife management. In many ways, she said, it was a continuation of the values and lifestyle she was raised with.

“The culture in New Mexico, especially with the Native American influence -- I do have a little bit of that in my family heritage -- is a very spiritual connection to the ground. What you take, you steward -- and you don’t harvest something without recognition of what that means,” Garcia said. “I think growing up with those sorts of values led me to wanting to be a part of management and decision-making relative to public lands in the US.”

Garcia is now a regional wildlife ecologist for the U.S. Forest Service, and has been working out of Portland since February of this year, after jobs in the Northern Rockies, the Great Basin and a short detail job in the Southeast right after Hurricane Katrina. She’s worked for the agency since 1999. Her current position involves working with partnering agencies and academic institutions on research and making recommendations to either maintain or rehabilitate ecosystems throughout the region. She likes the complexity and biological diversity of the Northwest.

“I think the constituents of Oregon and Washington really expect a high level of science for managing these places that they value so much,” Garcia said. “I spend a lot of time in the trees. I spend a lot of time in front of my computer, sadly, anymore, reviewing manuscripts and models. My brain and my eyes are pretty fried at the end of the day.”

Garcia recommends young people who are considering a career in wildlife management seek out opportunities for financial aid, but also seek out mentors and networking opportunities through groups like the Wildlife Society, which holds an annual conference in February and has some campus chapters. She also said she recognizes volunteering isn’t an option for everybody, but is something to consider.

Being willing to move around can be key to building a career in the Forest Service, Garcia said, and that can be challenging. Her family moved every few years when she was growing up, and were sometimes the only Hispanic family in their community. In addition, being constantly mobile as an adult has sometimes made it difficult to maintain family ties as an adult.

Garcia also stressed the significance of prioritizing education above everything else – and not worrying about graduate work until bachelor’s coursework is complete.

One potential door-opener, said Forest Service spokesperson Shandra Terry, is scholarships offered through a partnership between the Forest Service and The Skanner Foundation.

“One of the main focus areas where The Skanner Foundation and the US Forest Service really connect was at the intersection of ensuring that we are supporting our young people in this community, and really encouraging and inspiring them to further their education and to consider natural resources as a potential career choice,” Terry said. “We’re talking forestry, fire, wildlife biology, computer science, hydrology, those types of disciplines. That was one of the reasons that inspired this partnership because The Skanner Foundation and the US Forest Service share in such a very deep way of wanting to create the next generation of natural resources land stewards.”