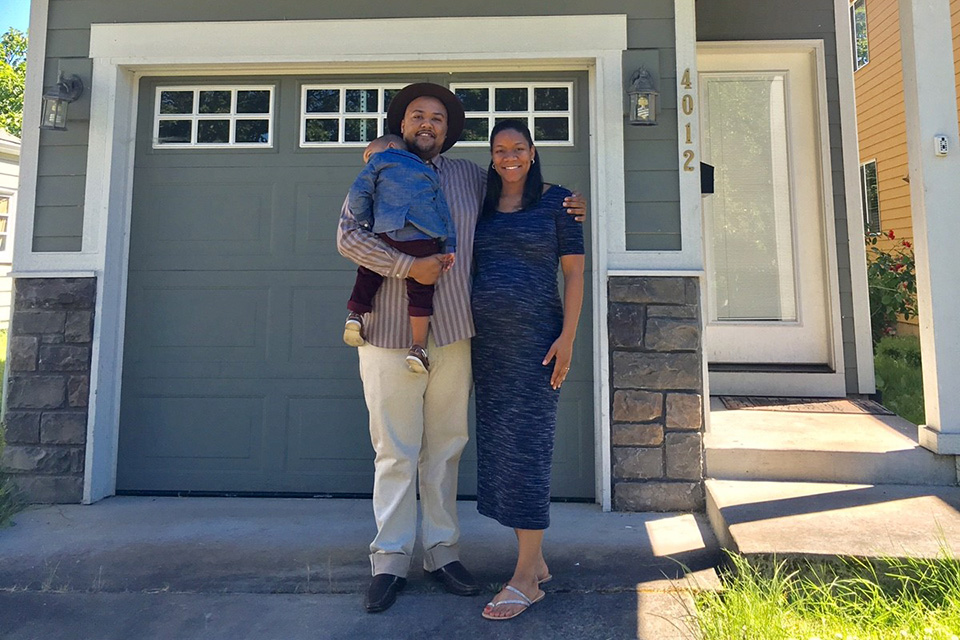 When Giovanni Battles first heard about the North/Northeast Preference policy, he was skeptical.

His mother heard about the policy, which gives longtime residents of Northeast Portland preference in housing, on the radio. She urged Battles and his fiancée, Ashley Rollins, to look into it.

The preference policy, which was part of the North/Northeast Neighborhood Housing Strategy adopted by the Portland Housing Bureau in 2014, assigns points to applicants for homeownership assistance and income-restricted rental housing based on their relationship with the Albina neighborhood of Northeast Portland. Those who grew up in the Albina neighborhood could receive up to three points; people with parents or grandparents who had lived in the neighborhood could receive additional points, for a total of six possible points.

Battles, a SummerWorks coordinator for Multnomah County, received all six points, placing him high on the priority list for the homeownership assistance through the program. This summer he bought his first house at North Chataqua and Willis, three blocks from where is mother grew up and across the street from Rollins’ grandfather’s former house.

‘There was no mold that I had to fit into’

The preference policy is an attempt to correct decades of urban renewal policy, as well as a more recent rapid wave of gentrification, that displaced Black families in Northeast Portland. Recent census figures show about 20 percent of residents of inner northeast Portland identify as Black, as compared to 50 percent in the 1980s.

The policy gives priority to individuals who have been displaced or are at risk of displacement, or whose parents or grandparents were displaced by eminent domain programs. Prospective homebuyers must also be “mortgage-ready” within a certain time frame, and must make up to 60 percent of the area median income.

The first rollout was in May of last year, when the Portland Housing Bureau allocated $5 million in funding for homeownership assistance for first-time homebuyers. Some went to down payment assistance – administered through the African American Alliance for Homeownership, Proud Ground, Habitat for Humanity, the Native American Youth and Family Center and Portland Community Reinvestment Initiatives – and some went to funding for new development, according to housing bureau spokesperson Martha Calhoon.

Battles was one in a group of 65 people to become eligible for homeownership assistance through the program. He went to AAAH’s homeownership fair in 2016 and went on a bus tour of eight houses listed for sale.

“The funny thing is, of the eight houses, the one house I decided not to get out and look at, that was the house we bought,” Battles said. He was reluctant because it was being offered through a model where a nonprofit organization would own the lot, while he would own the house – a model that made him uncomfortable.

After discussing it with staff at AAAH, he was reassured they would find an arrangement that worked for him – and they did. Battles moved into his new home in July.

Battles attributes his success to culturally specific services he received through AAAH, where he took homeownership classes and received supportive counseling to help him find the right loan and right home for him.

“I have to praise culturally specific programs,” Battles said. At AAAH, he felt more comfortable talking about things he might have been embarrassed to talk about in other settings. “You can just let your hair down.”

“What really worked for me was there was no mold that I had to fit into,” said Callie Love, a policy advisor for Multnomah County Commissioner Loretta Smith. Love bought her house in July, also with support from AAAH. Love and Battles work together in Smith’s office and supported each other as they each sought to buy homes.

“I think one of our strengths is that because we are a little smaller than some of the other counseling agencies out there, sometimes our clients feel a little bit closer to us,” said Daniel Lechuga, a pre-purchase and foreclosure counselor for AAAH. The agency serves 75 to 80 new clients every year.

Love wasn’t eligible for the preference policy; she grew up in Lents, and had lived in several locations in Multnomah and Clackamas county before buying her new home, which is at Northeast 152nd and Sandy.

She first started looking into buying a house in 2013, through a nonprofit that helped her start an individual development account – a savings account that provides three-to-one matching funds for lower-income Oregonians looking to save for a specific goal. While that initial push to start saving for a down payment was helpful, she said staff told her she simply didn’t make enough money to buy a house anywhere in the Portland area -- and the experience left her feeling discouraged.

The support systems she found at AAAH were radically different, she said, so much so that she’s encouraged numerous friends to seek them out.

Battles said the same, adding he tells people even if they don’t quite think they’re ready to purchase a new home, they’re further along than they think.

The housing preference policy is intended to reverse gentrification in the Northeast Portland area, but that’s a slow process. Calhoon said there were 1,100 total applicants for the homeownership programs under the preference policy. As of October, she said, of the 43 applicants in the pipeline, 7 percent are mortage ready; 28 percent are expected to be in six months and 51 percent will be in 12 to 18 months. In October there were 43 applicants that were in that pipeline.

There are 65 slots in the homeownership program, and some have fallen out, which means the housing bureau will contact others who are high on the priority list to review their eligibility.

According to US Census community survey data, 42 percent of African Americans own their homes – compared to 72.5 percent of Whites. The rate of Black homeownership has also decreased in recent decades – in 1990, 47 percent of Black Americans owned their houses.

National and local data also show Black families who rent are more likely to pay 30 percent or more of their income to do so. (The preference policy includes a program to prioritize applicants for new, income-restricted rental housing in Northeast Portland.)

Lechuga said 1.6 percent of home loans made in the Portland-Vancouver metro area last year were made to African Americans.

Battles’ father owned his home and stressed the importance of owning a home to build wealth. That was also a major goal for Love, who grew up in poverty, but because her family owned their home, that was one aspect of her upbringing that was stable.

“This was very surreal for me to be able to purchase property for my kids,” said Love, who has two children – one who is 15 and one who is two-and-a-half. “This is my property. It’s tangible.”