Ta-Nehisi Coates Speaks on the Reward of Resistance 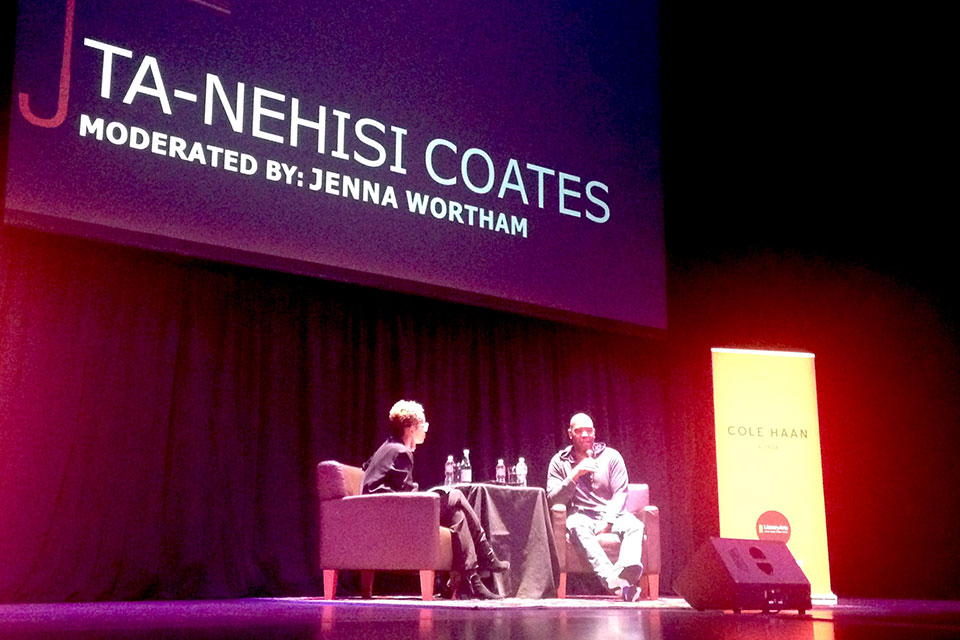 To kick off Portland’s annual literary festival Wordstock, acclaimed author and journalist Ta-Nehisi Coates shared with a sold-out audience at the Arlene Schnitzer Concert Hall his take on culture and politics – and particularly how they pertain to Black America – which he’s become famous for.

As fans began queuing early in the morning for the highly anticipated discussion between the National Book Award-winner and New York Times Magazine writer Jenna Wortham, the line outside the 2,700-plus capacity venue snaked around city blocks in Southwest Portland.

Entering the stage in jeans and a hoodie, Coates maintained his casual and approachable persona while joking that he was tired of donning a suit for public appearances.

“I think about not embarrassing Black people a lot -- maybe more than is healthy,” Coates joked within minutes of taking a seat.

After his second book, “Between the World and Me,” was published in 2015 – written as a letter to his son that mixes personal experiences alongside the symbolism and often bleak realities of being Black in the United States – Coates became the quintessential voice on race relations and what some have called the “totality of Blackness” in America today.

Through her endorsement of his work, prolific novelist Toni Morrison tasked Coates with filling “the intellectual void” of James Baldwin since his death in 1987.

Yet while Coates, now 42, doesn’t reject the praise, he does make a point to tread carefully around it.

Coates said he’s always been a writer, and the act of writing itself is what he calls his best form of “self care.” Given that, picking up where Baldwin left off means carrying an image he’s not necessarily prepared to take on.

In conversation with Wortham, Coates was forthright about being roped into what he called “the cult of smart.”

“Before ‘Between the World and Me,’ I felt like a writer,” said Coates, who Wortham also referred to as a “custodian of history.” Yet after its widely positive reception which flung him into the guest chairs of prestigious speaking engagements, “it became like you have to have an answer on everything.”

But fans of Coates – who is a national correspondent for The Atlantic – want to hear those answers, in whatever form or opinion they may come.

As Coates said, “I think a lot of writers feel their credibility is seeded in being right. I don’t think that’s what people expect of me. I think they except me to be honest... When you’re pursuing your curiosity, you’re going to be wrong sometimes.”

Over the course of an hour at the Arlene Schnitzer, Wortham and Coates discussed topics of social media (“You can’t be in a constant conversation on Twitter”), fame (“I have a stable life with a wife and a kid and I almost went crazy”), and public adulation (“I get a different kind of thank you from White people, but it’s not a wrong thank you”).

The talk eventually addressed his new book, “We Were Eight Years in Power: An American Tragedy." As a collection of Coates’ essays and articles from The Atlantic, the work looks at America’s experiment in multiracial democracy, from Reconstruction-era Black politicians to the unprecedented election of Barack Obama.

“I don’t know if there’s been a more shining emblem in American history of good Negro government than Barack Obama,” said Coates.

He spoke candidly about Obama as the ideal presidential candidate of the American dream – Ivy League-educated with a beautiful and intelligent wife, two bright children and a dog named Bo.

Yet, Coates points out, Obama was badgered by conspiracy theorists and hated for his respectability from decades of America’s entrenched racism and White Supremacy.

To the author, the adverse reaction to the Obama presidency from the alt-right essentially gave rise to the election of Trump, who Coates argues is America’s “first White president.”

Yet still, ultimately, Coates said he never pegged Trump as a winner, specifically because of what he called “White self-preservation.” In other words, putting Trump in power meant rocking the boat beyond what most White voters, even on the right, are prepared to cope with.

Towards the end of their discussion, Coates – always a realist and a self-professed atheist – asserted his belief that he will never see an end to White Supremacy in his life or his son’s, for that matter.

Even so, he finds meaning in his radical acceptance of it, because the resistance is the reward, he said. “Every human life ends badly. But we accept this and the decision we make as humans beings is that it matters what happens in-between.”

In response to an audience question on what one can do about White guilt – which Coates calls the recognition of power being used unjustly – and how to take part in the struggle for racial equality, the writer appeared stumped.

And then, his response: “Find out what you love. And then find out how you angle the thing you love towards the struggle you actually care about.”