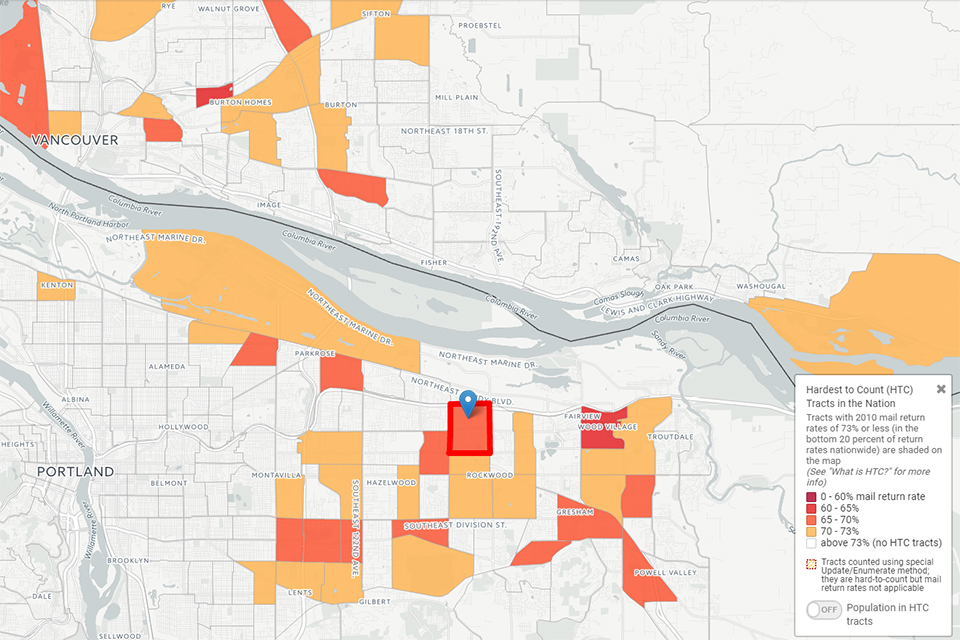 A new, searchable online map shows Oregon’s communities of color are in danger of being undercounted in the 2020 census -- and flattened funding could make that worse.

The map, produced by the Center for Urban Research at the Graduate Center of the City University of New York (CUNY), highlights Census tracts where less than 70 percent of households mailed back their census forms in 2010 and also notes tracts with populations that are traditionally hard to count.

“There are really two major ways that being undercounted impacts communities,” said Casey Goldvale, policy and research analyst at Georgetown Center on Poverty and Inequality.

For communities of color in predominantly White areas, being undercounted can also mean the powers that be – including government agencies and community-based organizations – don’t appropriately tailor services to the demographics of their community.

“Being undercounted can mean that a community’s presence is not recognized,” Goldvale said.

The second way undercounting hurts communities is that directly or indirectly, decennial census data determines how about $700 billion in federal funding is allocated to states and municipalities. That includes assistance for nutrition and child care, housing vouchers, matching dollars for Medicaid payments as well as funding for supplemental nutritional assistance (SNAP) programs, the national school lunch program and Head Start.

In April, the Trump administration’s proposed budget included $1.5 billion for the U.S. Census Bureau, calling it a $100 million increase – but it’s actually $140 million less than the $1.64 billion increase requested for 2017.

Normally, in the years leading up to the 10-year Census count, Census funding is increased, Goldvale said. The Washington Post reported in April that late in a decade, funding for the Census Bureau sometimes doubles. And Goldvale notes that trend happens regardless of who holds power in Washington.

“It’s normally quite a significant rampup and the past few years, census funding is flatlining. This has already forced cancellation or streamlining of key testing of field operations and new technologies, which could adversely impact hard-to-count neighborhoods during the census in 2020," Goldvale said.

Advocates are concerned about the upcoming census in part because the U.S. Census Bureau plans to rely on online forms in 2020, rather than paper forms or in-person interviews, which are funded to mitigate undercounting in tracts where people mail back fewer forms.

Internet access is an important factor for the 2020 census, when the Census Bureau will urge most households to fill out the census form online rather than use paper questionnaire.

“While the 2020 Census will deploy new technologies and procedures designed to reduce paperwork and save money, those changes will not by themselves overcome the challenges of reaching hard-to-count areas,” said Steven Romalewski, whose team at CUNY developed the maps, in a press release about the hard-to-count map.

Romalewski’s team found that congressional districts with low mail return rates in the 2010 census also tended to have more households without internet access.

Telephone interviews, paper questionnaires and in-person visits to unresponsive households all cost more than online forms – which is why advocates and the researchers who created the map are concerned about 2020 funding.

Critics of flattened funding include Sen. Jeff Merkley (D-OR), who said in a written statement that flattened census funding is “not acceptable.”

“The census might not seem exciting, but under-counting lower income people and communities of color could have lasting impact. The census affects what our voting districts look like and how much federal funding gets to state and local programs,” Merkley wrote.

Underfunding isn’t the only issue that worries advocates for communities of color. A draft executive order leaked from the White House in January suggested adding a question about immigration status, which experts said could have a chilling effect on who responded to the survey.