This Forest Service Employee Fights a Different Kind of Fire 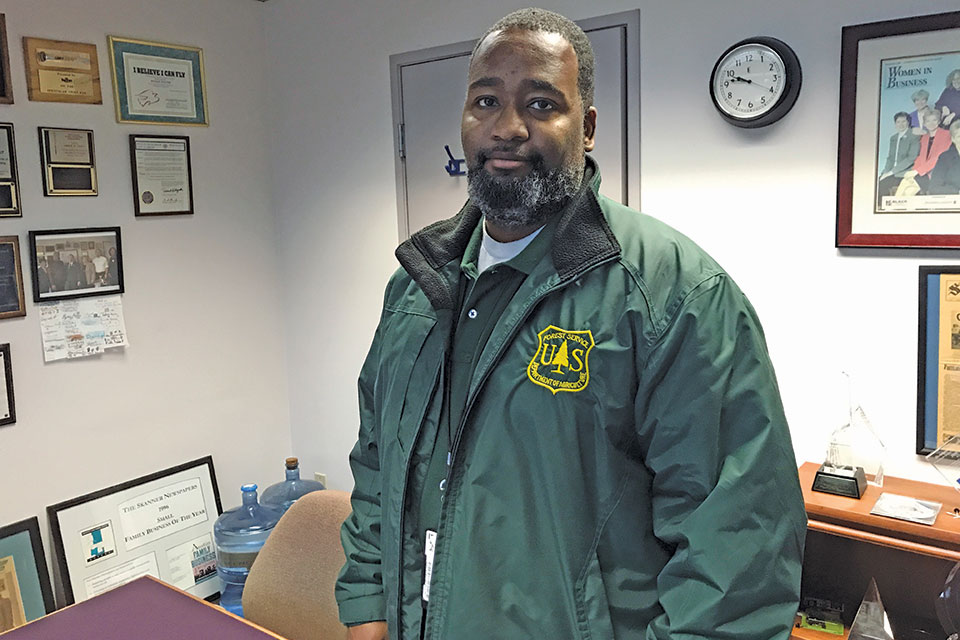 Joey Jones loves nature and the Northwest, so when he left the military, working for the U.S. Forest Service seemed like a natural fit.

But Jones’ job isn’t what one might picture when one imagines working for the Forest Service.

He’s a network operations supervisor who works in Portland but supervises a team of about 20 people, who work remotely from all over the country, to monitor and repair the Forest Service’s information networks.

“What makes the Forest Service unique is usually, where our business takes place is where no one else is at,” Jones told The Skanner.

Supporting communication networks in places where firefighters or other workers have poor cell phone signal, or low-bandwidth Internet connections – but still need to communicate with colleagues quickly and frequently – is key, he said.

Jones has worked for the Forest Service for two years, after spending most of his adult career in the military, based out of Ft. Lewis Army Base in Tacoma, Wash. He holds a bachelor’s degree in information system security from ITT Technical Institute – which was the natural culmination of a lifelong interest in technology and a tendency to tinker.

“My father bought us a Zenith TV, which had a picture-in-picture (a feature that displayed two images, from different channels, at the same time). As a kid, I thought it was two TVs in there,” said Jones, who grew up in Mississippi. “The babysitters must have been doing something, and I got a screwdriver and took the whole thing apart.”

He got in trouble, though he did put the TV back together. But as time went on, he became the person family members would ask for help when a piece of electronic equipment was broken or malfunctioning.

The Forest Service is one of the sponsors of The Skanner Foundation’s scholarships, for which applications are due Oct. 30.  Terry is hopeful young people who are interested in technology will consider careers working for the Forest Service.

Terry and Jones said those looking to pursue a career path like Jones’ should consider majors like geographic information systems, computer science or degrees with IT or security concentrations like Jones’.

Jones also noted applying for jobs with the U.S. government can be daunting, and he applied for several positions before he got the job he has. He urged potential applicants to seek feedback on rejections if it’s available and to be persistent.

“I moved up the ladder rather quick, also, for someone my age and where I’m at in my career, just because the IT field is so diverse and it’s amazing. So that’s one thing I can say, looking back on my life, that one decision that I know I did right is the career field that I chose,” Jones said.