Oregon Rohingya Speak Out on Genocide 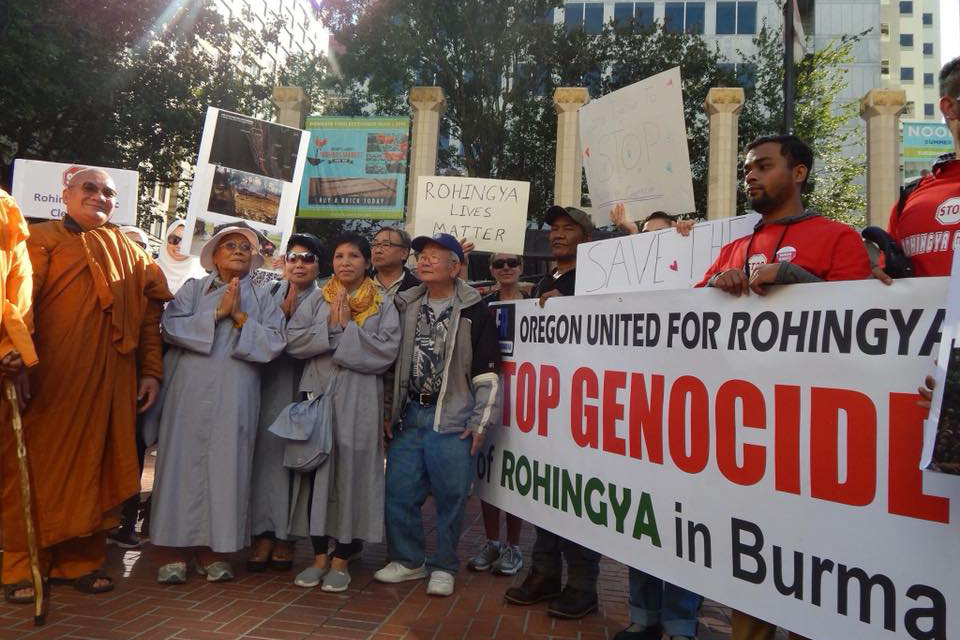 In Maungdaw, Arakan, Burma Mohammed Husson Ali taught school and later worked as a food monitor for the state welfare program. Then he was forced to leave by the Burmese military, first leaving for Bangladesh and then for Malaysia. In 2012, he came to Portland and became a U.S. citizen.

Ali is in constant contact with his family members, who live in refugee camps in Bangladesh. And he’s part of a small, growing movement to raise awareness about the ethnic and religious persecution of Rohingya in Myanmar.

According to Yusuf Iqbal, whose family emigrated long ago and who owns several businesses in the Portland area, there are about 100 Rohingya families in the Portland metro area, and about 5,000 in the United States. The largest concentrations of Rohingya families are in Wisconsin and Chicago, but Portland’s community has become a leading voice in calling for action to help Rohingya people overseas.

The term “Rohingya” refers to an mostly-Muslim ethnic group that has lived in predominantly-Buddhist Myanmar for centuries. Rohingya people have long been oppressed by Burma’s government, denied the right to free movement and education; according to Iqbar, a small percentage of Rohingyas currently living can read and write, and few of those living in the United States can read and write English.

In October of this year, Myanmar has drawn criticism from the United Nations, Amnesty International and others for ongoing attacks on Rohingya people. These have included the reported burning of villages, rape of Rohingya women and extra-judicial assassination of Rohingya men without warning or explanation. Ali’s nephew was killed. Portland resident Chit Khing, who just arrived four months ago, lost a cousin in an extrajudicial killing by soldiers.

The crisis has escalated in the last two months, with as many as 600,000 Rohingya having fled the country.

In September, Sen. Jeff Merkley (D-Oregon) released a statement on the ongoing persecution of Rohingya in Burma, and he told The Skanner he is working with colleagues in the Senate to draw more attention to the issue.

“The State Department is missing in action right now. They should be really protesting ethnic cleansing and assault on that community,” Merkley said last week in a meeting with The Skanner News.

Secretary of State Rex Tillerson did comment on the issue in a September with British Prime Minister Theresa May and Foreign Minister Boris Johnson. He called the current crisis a “defining moment” and said, “I think it is important that the global community speak out in support of what we all know the expectation is for the treatment of people regardless of their ethnicity,” he added. “This violence must stop, this persecution must stop.”

But the U.S. has otherwise been quiet on the issue. Local advocates are hoping for United Nations intervention, as well as a reinstatement of sanctions imposed under the Obama administration – and an embargo on weapons sales to the Burmese government. He asks that Americans concerned about the issue contact the Secretary of State’s office and White House directly to ask that the U.S. take further action.

“Unless the U.S. government intervenes, there will be no future for the Rohingya community,” Iqbal said.

Oregon’s Rohingya community has also taken to the streets. At the end of September, Oregon United for Rohingya – an informal group Iqbal and others hope to turn into a full-fledged advocacy group – organized a rally against Rohingya genocide at Pioneer Courthouse Square. It drew about 700 people, and speakers included leaders from several faith communities, as well as Congressman Earl Blumenauer and city commissioners Chloe Eudaly and Nick Fish.

Iqbal said members of the community are put in contact with each other by resettlement agencies. Those who’ve been in Portland longer help newcomers find rental housing – most of Portland’s Rohingyas live in Southeast Portland. The community also rents space from a southeast Portland mosque, where they hold a weekend school that offers religious instruction as well as guidance on becoming integrated into American culture. They stay in touch with family members overseas with prepaid phones and the Internet.

Iqbal said the Burmese government has actually not cracked down on access to media or the Internet – possibly because they want to scare Rohingya into fleeing.

“We think that the Burmese government wants these thing to be seen among the Rohingya communities, to put fear in the remote places and villages. ‘That village is being attacked, you should run away,’ that kind of thing. So they are not closing down information, which they can do,” Iqbal said.

He’s hoping to build a more formal organization where Americans can volunteer to help the community. In the meantime, Iqbal said he and other community members are working as hard as they can to raise awareness, because there is not much else they can do. Citing the end of the second world war, the end of slavery and the civil rights movement, as well as the end of the Yugoslavian conflict as examples, Iqbal said often people don’t realize something was wrong until it’s become part of the past.

“We want to reach out to the general population of Americans, who have very good hearts and they are not being informed,” Iqbal said. “If they’re informed, then they can actually put pressure to our government to do the right things.”

This story has been updated from an earlier version.