Woman Finds Reworked, Pro-Trump ‘In Our America’ Sticker in Mailbox 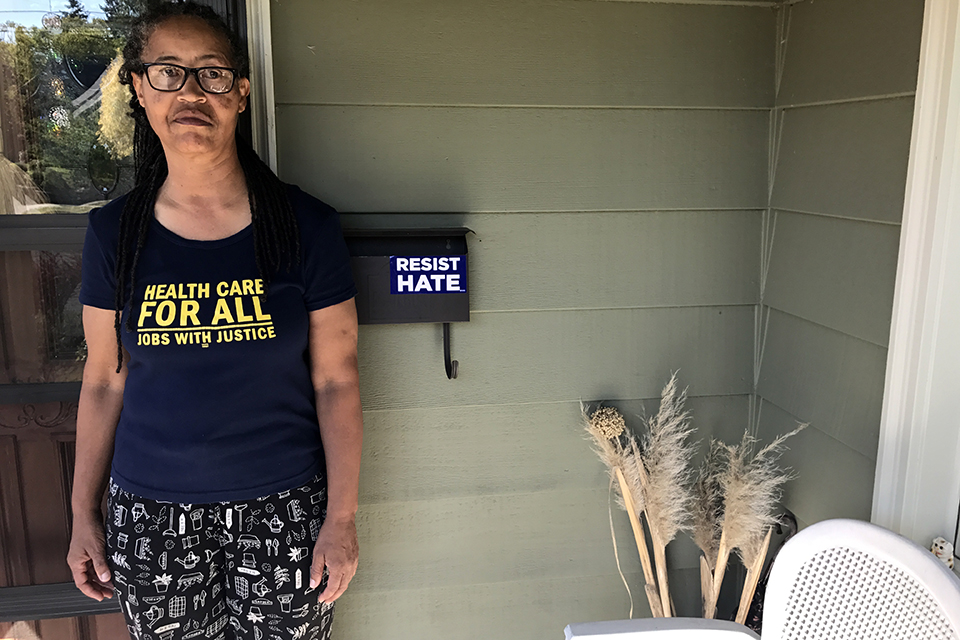 At the end of August, Karen Wells looked in her mailbox and found a sticker, without an envelope, address or stamp.

It looked a lot like the signs that have become a common sight in many Portland neighborhoods, including Alameda, where Wells lives. Transposed against an American flag-like background, they read, “In our America, all people are equal, love wins, Black lives matter, immigrants & refugees are welcome, disabilities are respected, women are in charge of their bodies, people & planet are valued over profit, diversity is celebrated.” The signs were created by a local social justice organization.

The sticker used a similar design and read, “In our America, all ‘men’ are created equal, Trump wins, all lives matter, legal immigrants are welcome to assimilate, individual rights are respected under the law, reproductive choices are a private matter, free market capitalism determines value, Western culture is celebrated.”

Wells told The Skanner she talked to her letter carrier, who encouraged her to file a complaint, which she has not yet done, and also to her neighbors, none of whom received similar messages. She is African American and her wife is White; most of their immediate neighbors are also White, and have lived for 20 years in a neighborhood Wells describes as “pretty homogeneous” and has been the entire time she’s lived there.

Wells thinks her household – which bears signs with political slogans including “Black Lives Matter” and “Love Wins” – was targeted specifically. The sticker has appeared twice more in her mailbox, she said. (The mailbox itself sports a "Resist Hate" sticker.) Last fall, before the election, she said, someone posted pro-Trump flyers to her fence.

An early childhood educator, Wells has also written columns about bullying for the Concordia News – and early this year helped draft a statement about inclusion on behalf of the neighborhood association.

“I just wanted to let people know that this is happening and that we must continue to be vigilant in our resistance to it,” she told The Skanner.

Wells has lived in Portland for 40 years and when asked if she’s encountered anything like this before, she initially said no. Then she said, “Let me back up.”

“Years ago, and by years ago I mean the ‘80s, I was walking with a friend near Shemanski Park, near the Schnitzer. Something flew past me and went splat,” she said. It was an egg. She turned around and saw a group of young White men shouting racial slurs.

Part of what troubles her about the flyers – and reminds her of the downtown incident from so many years ago, when the young men quickly ran away – is the anonymity, the refusal to engage.

“It’s always in motion or under cover of night or anonymously,” she said. “If you’re going to do it, then good gracious, stop and have a conversation.”

Wells’ recent experience also seems to be part of a local trend. At the end of September, local media reported that a Roosevelt High School sticker had found a flyer in a student bathroom reading, “The KKK wants you.”

At the end of September, multiple schools in the David Douglas School District were spray painted with racist graffiti and hit with other vandalism, prompting a press conference last week from school officials and community groups.

And last week, a Multnomah County employee reported finding a message threatening Muslims in the break room of a county building.

An Associated Press investigation earlier this year found 2,800 local law enforcement agencies failed to report their hate-crime data to the Federal Bureau of Investigation for its annual tally of hate incidents.

And situations like Wells’ can be particularly difficult to investigate. Even when an official complaint is made, anonymous stickers, notes or comments containing no contact information leave investigators with few potential leads. But the psychological effect is still jarring, she said.

“Oftentimes, when I relate the incident to friends who are White, it’s blown off as, ‘Oh, it’s just a prank.’ How can it be a prank if it’s so directed? It’s vicious. It’s learned behavior,” she said.

She also said she hopes to see White people and others with more privilege use it to shut down hateful and hurtful comments when the opportunity arises.

“Each person is sovereign. Each person is entitled to the protection of the community they find themselves in,” Wells said. “We’re all in this together and if we are to survive as a society, dominant culture needs to get over this idea of, ‘It’ll just go away.’”