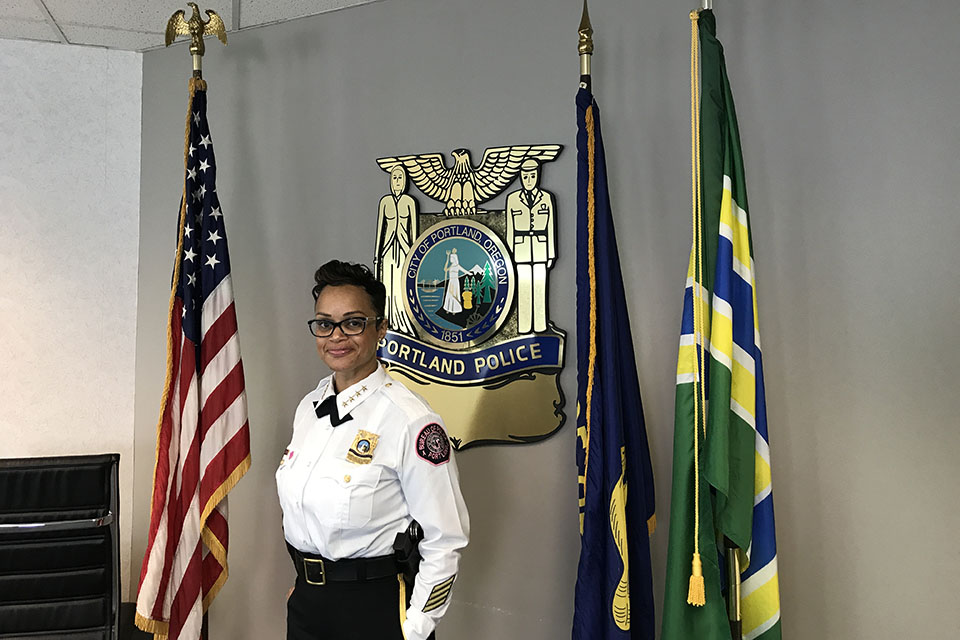 Danielle Outlaw was sworn in Monday as Portland’s 48th Police Chief, and the first African American woman to serve in the role. Outlaw was selected in August following a nationwide search that included a round of interviews with representatives from stakeholder groups, including the Urban League of Portland, the NAACP Portland Branch, the Portland Police Association and the Portland Business Alliance.

Outlaw steps into a position that has seen high turnover in recent years: the national search that led to her hire was a campaign promise from then-candidate, now-Mayor Ted Wheeler following the resignation of Larry O’Dea, who replaced Mike Reese after his 2015 retirement. O’Dea had been arrested on criminal charges involving a shooting in eastern Oregon; he was later cleared. O’Dea was briefly replaced by Donna Henderson, who served just over a month before retiring. Mike Marshman was promoted to interim chief and applied for the permanent position, but announced his retirement shortly after the city announced Outlaw had been selected. Police Bureau veteran Chris Uehara was sworn in as acting chief at the end of August.

Outlaw comes to Portland from Oakland, where she served as deputy chief.  She has received the Oakland Black Officers’ Association Trailblazer Award, the Holy Names High School Alumnae Association Citation for Service and the 2015 Police Executive Research Forum (PERF) Gary P. Hayes Award. Outlaw has also served as vice president of the San Francisco Bay Area National Organization of Black Law Enforcement Executives Chapter, is a member of the University of San Francisco International Institute of Criminal Justice Leadership Advisory Board and the International Association of Chiefs of Police Human and Civil Rights Committee. She holds a bachelor of arts in sociology from the University of San Francisco and a master's degree in business administration from Pepperdine University.

Outlaw granted interviews with several local media outlets, including The Skanner, Tuesday. This interview has been edited for space and clarity.

THE SKANNER NEWS: Have you had a chance to meet yet with representatives from Portland’s communities of color?

DANIELLE OUTLAW: So outside of the initial meetings with them, I have not yet -- but I have an action-packed next two weeks to get out there and meet with everyone. I’m actually looking forward to it because we’ll have a little more time now. I’m looking forward to getting down to the meat and potatoes and really picking their brains and finding out what we all need to do to move forward.

TSN: Portland and other police bureaus around the country have drawn some criticism for how they’ve handled protest – including excessive force against protesters and how potential conflicts have been handled between protesters and counter-protesters. What do you think are best practices when it comes to large crowds and protests?

DO: If you want to say “best practices,” there are some things that work well. But there’s no cookie-cutter approach to how we deal with civil unrest, and they really need to be taken on a case-by-case basis: who the crowd is, numbers, what we’re dealing with, what resources we have available to us. I’m very cognizant about saying what works well in a previous agency and forcing this agency to do the same, because it’s not always the same.

But with that said, I will also offer that one of my priorities is to make sure that I review past incidents from here, how we dealt with them, to look at policy – because sometimes it’s policy that dictates how members react and respond – to take a look at how we train and just some critical review of what’s worked well, what we can do to maybe improve, and then compare that to some other case studies with some other agencies around the country to find out what’s worked well. It’s not about one particular thing that you should or shouldn’t do.

TSN: Portland has also been under DOJ supervision for several years. But Jeff Sessions is saying that he’s not interested in continuing that. However, Mayor Wheeler wants to continue the reforms that were outlined in the settlement. Do you have a position on that, and do you see yourself having a role in making sure those reforms go forward as they were already laid out in the settlement?

DO: I am all for introspection. I am all for accountability. I think it’s important, whether we are doing really well or really terribly, for us to self-assess – to stop, take a break and say, Okay, how can we improve? That’s with the DOJ or without the DOJ. It just so happens that the DOJ is here, there’s a settlement agreement. I think good leadership requires that and it’s my responsibility to drive that, whether the DOJ was here or not. We’re doing it because it’s the right thing to do. We’re not doing it because a federal judge or a court or any overseeing body is making us do that.

TSN: Portland has an increasingly visible homeless problem. On one side, there are some neighborhood associations and people in the business community pushing back against public camping, and advocates for houseless people saying that for people who have nowhere else to go, sweeps are not necessarily the answer. What would you like to see this department do in terms of policing houseless people and addressing that problem?

DO: I know the question falls on me because we have a role in this but we’re not the lead in this, when it comes to providing services and making sure that what’s needed is provided. I want to put that out there. But I want to acknowledge that there has to be balance. We can’t over-police this issue or overly enforce, so there has to be some give-and-take there.

But again, I’m very sensitive to what’s going on, and it isn’t a Portland thing. It’s starting to grow in a lot of major cities. I’m very sensitive to that. And because I’m sensitive to that, I’m very cognizant of the fact that we can’t over-police, we shouldn’t over-police. There’s no magic equation or solution for that either. In my role, I’ll make sure we do everything that we can to work with the other various agencies to make sure that it doesn’t become solely a police issue, because it’s not. You know, that’s just the bottom line on that one.

TSN: There’s evidence that hate crimes and incidents have increased in the last year, nationwide and in Oregon. There was an SPLC survey saying Oregon had the highest number of hate crimes in the immediate aftermath of the election – though they didn’t collect data from before the election, so it’s hard to make an apples to apples comparison. There are also examples like Jeremy Christian, the man arrested in connection with two murders on public transit this year -- there were other incidents that happened involving him harassing people of color in public spaces prior to that event. How does this bureau intend to address and track hate crimes in the future?

DO: No, but I think I see where you’re going with that. It is something on my radar. It’s day two, so I can’t give you a comprehensive plan on what we will do but it’s certainly on my radar for obvious reasons and whether there are three, six, nine, a million, you know, one is too many. It’s certainly something, especially given the history of where we are, it’s a very rightful concern that people should have regardless of how many we have. But I’m not prepared to tell you what that will look like in the future. But I will certainly tell you that it’s important to me, which means it’s important to the organization.

DO: I just would like folks to begin to see us as human beings, hardworking individuals that make up a team – not just the team within ourselves, but with the community, we’re partners and we value that. And um transformation, where needed, doesn’t happen overnight. Give us a little bit of time. And we can’t do everything ourselves. I think that’s where we can shoot ourselves in the foot – if we think that we can. We can’t do our jobs without the help of the community, because we can very easily make unilateral decisions without those it impacts. But is that wise? I don’t think so. I really think folks can look forward to some collaborative partnerships with us and to continue the good work that’s been done. And like I said, before, just identifying areas that can be strengthened and we’ll do that too. I’m excited. I look forward to what’s to come.