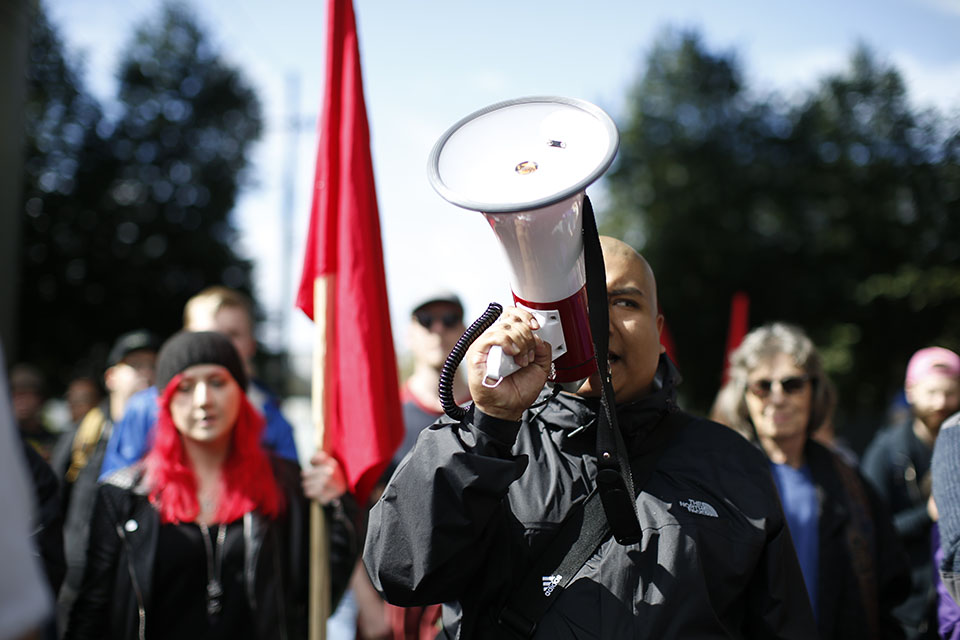 PORTLAND — U.S. Attorney General Jeff Sessions on Tuesday criticized sanctuary cities that try to protect immigrants in the country illegally as places that "undermine the moral authority of the law."

He made the comments a day after the Trump administration appealed a judge's ruling blocking its efforts to withhold money from the cities.

Sessions, speaking to law enforcement officers in a sanctuary city in the sanctuary state of Oregon, urged officials who have decided that local police should not cooperate with federal immigration agents to reconsider those policies.

As he spoke, protesters lined the streets outside the Portland field office of the U.S. Citizenship and Immigration Services. Their chants could faintly be heard inside the room where Sessions appeared.

Sessions said the federal grant money that U.S. cities receive are not an entitlement, and cannot be given to sanctuary cities that he said frustrate efforts to reduce crime.

"Rather than reconsider their policies, these sanctuary jurisdictions feign outrage when they lose federal funds as a direct result of actions designed to nullify plain federal law," Sessions said.

Sessions told the law enforcement officers in Portland that city officials in "these sanctuary jurisdictions feign outrage when they lose federal funds as a direct result of actions designed to nullify plain federal law."

And he accused Portland and other cities of suing the administration "so that they can keep receiving taxpayer-funded grants while continuing to impede federal immigration enforcement."

Portland Mayor Ted Wheeler, who did not attend the speech, wrote a letter to the Sessions saying that the city celebrates diversity and that "our local laws support these values and we are better for it."

"It is for these reasons that I strongly oppose the Trump administration's efforts to coerce local law enforcement agencies to enforce federal immigration laws," wrote Wheeler, a Democrat.

Sessions highlighted the case of Sergio Martinez, a man accused of assaulting two women in July after his release from a Portland jail. Martinez has a lengthy arrest record, and has been deported more than a dozen times.

U.S. Immigration and Customs Enforcement said it asked the Multnomah County Sheriff's Office to prevent Martinez' release so the agency could take him into custody.

But Sheriff Mike Reese said last month that the case would have ended differently if the federal agency had sent a criminal detention warrant signed by a judge.

"Instead," he said, "they processed a civil detainer, which they know cannot be legally used in Oregon."

Oregon three decades ago became America's first sanctuary state with a law that prohibits law enforcement from detaining people who are in the U.S. illegally but have not broken other laws.

Though Sessions asked Portland's leaders to change their sanctuary policies, he was not scheduled to meet with any of them.

Oregon Gov. Kate Brown, also a Democrat, said she requested a meeting with Sessions but got no response.

She said she wanted to discuss Trump's decision to end the Deferred Action for Childhood Arrivals program that gives protection from deportation to immigrants who were brought to the U.S. illegally by their parents or by parents who overstayed visas.

They are commonly referred to as "Dreamers" based on never-passed proposals in Congress called the DREAM Act that would have provided similar protections for the young immigrants.

Sessions "clearly did not have time to meet with me and hear my strong views about how I feel about making sure that Dreamers are able to go to school, to work, and to lead lives in this state," Brown said.