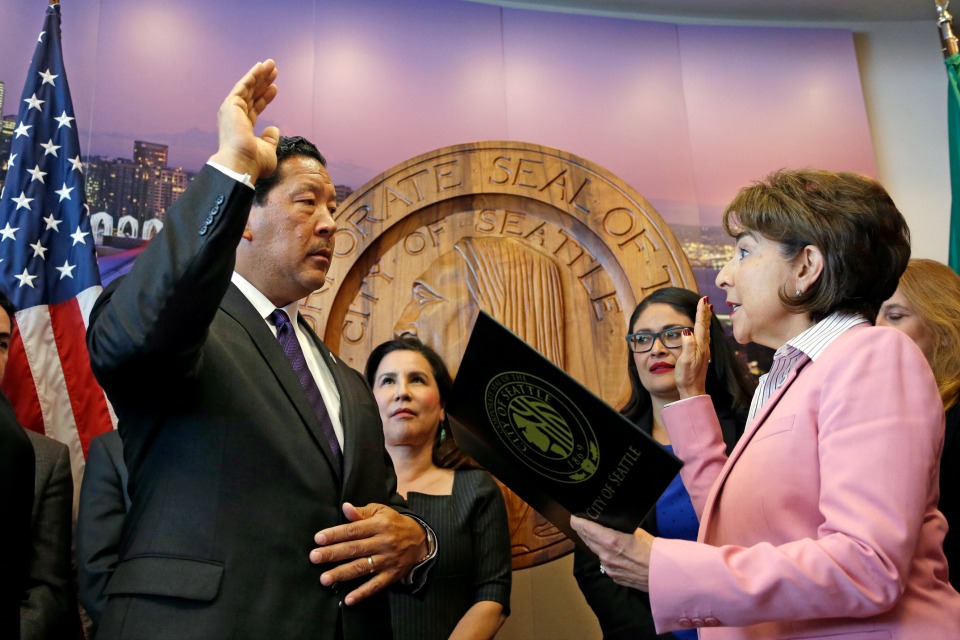 But for some supporters, his standing eroded this year when he attacked the backgrounds of men who accused him of sexually abusing them in the 1970s and 1980s when they were teens.

By the time a fifth accuser — Murray's cousin — came forward this week, many were relieved when he announced he would resign as of late Wednesday afternoon.

"We think it definitely should have happened sooner," Julia Ricciardi, co-chair of the city's LGBTQ Commission, calling his resignation "an opportunity for us to put this behind as an issue."

City Council President Bruce Harrell was sworn in as mayor after Murray's resignation took effect. He has five days to decide whether to finish the mayor's term, which ends in December; doing so would force him to give up his council seat.

The departure of Murray, a 62-year-old Democrat and the state's most prominent gay politician, brings an ignoble end to a 22-year career in public office, including 18 as a state lawmaker.

Though he vehemently denied the accusations and previously refused to step down, he announced his resignation within hours of a Seattle Times report on Tuesday detailing his cousin's account.

Before being elected mayor in 2013, Murray was a longtime state lawmaker who led the state's campaign to legalize same-sex marriage.

His positions were often popular in ultraliberal Seattle, where he pushed to raise the city's minimum hourly wage to $15 and expanded access to preschool, and even those critical of his response to the allegations were quick to credit his accomplishments in office.

But Murray could be abrasive and difficult to work with and was known to berate reporters, colleagues and staff. His first mayoral press secretary, Rosalind Brazel, said in a discrimination claim that Murray frequently snapped at her and that she "was instructed that she was not to speak to him while in the car with him."

Before the allegations, Murray was expected to win re-election handily. But by May, he had announced he wouldn't run again, though he had hoped to finish out his term at the end of the year.

As the claims mounted, his criticism of the men cost him support.

In April, when one accuser filed a lawsuit alleging that Murray abused him after meeting him on a city bus, Murray criticized The Seattle Times for printing what he described as unfounded and false accusations.

He attacked a different accuser — his former foster son — in an opinion piece the same month, writing that "his criminal history proves he cannot be trusted" and detailing the man's criminal record.

Murray also suggested he was the victim of an anti-gay conspiracy, pointing out that the founder of the law firm representing accuser Delvonn Heckard had opposed gay marriage and allowing transgender people to use the restrooms of their choice.

"There's no question it cost him support within the community, both the LGBT community and the broader community," said Democratic state Sen. Jamie Pedersen, who is also gay. "There was a perception he was blaming the men who had come forward."

Murray's effort to portray himself as a victim of a conspiracy created a false paradigm that "if you believe the accusations, then you're perpetuating homophobia," Ricciardi said.

Dyer told The Seattle Times in a story published Tuesday that he was infuriated with Murray's attacks of the men accusing him, and that's what prompted him to speak out.

Dyer said he was 13 and Murray was in his early 20s when Murray came to live with Dyer's family in Medford, New York, in 1975. The two shared a bedroom, and Murray repeatedly molested him over the course of a year, Dyer said.

Dyer said the molestation stopped only after Murray was accused of abuse by a boy in a Catholic group home where Murray worked. Dyer told the newspaper his uncle persuaded the group home not to pursue charges as long as Murray left.

Efforts by The Associated Press to reach Dyer were not immediately successful, but Beauregard released a written statement from him.

"Edward claims, as with the other allegations, that he didn't molest me," it said. "He really can't say anything else.  What benefit is it for me to come out and expose myself at this point in my life?"

Murray has not said what he might do after leaving office.

Pedersen credited Murray with a legacy that went beyond gay rights to his efforts on homelessness, transportation and other issues.

"I don't have any idea what happened in the 1970s and 1980s," he said. "But I have a huge sense of sadness and loss regardless of whether they're true or not. We're losing someone who's been a very engaged and effective leader."

Information from: The Seattle Times.