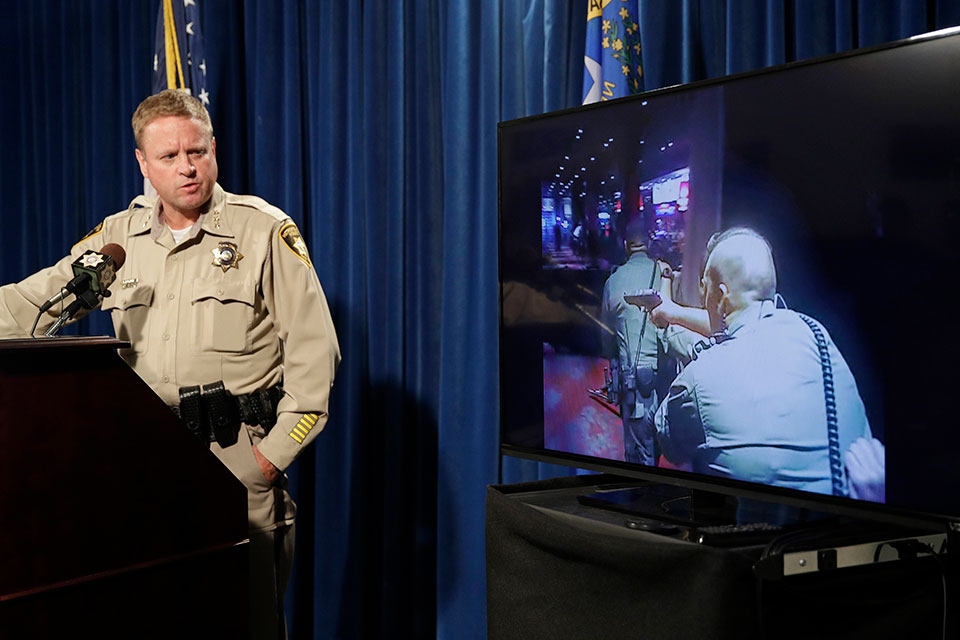 Police said they're investigating, but that Bennett failed to stop for officers searching a crowded casino for what they believed to be an active shooter just hours after the Aug. 26 boxing match between Floyd Mayweather Jr. and Conor McGregor.

"I believe this case will become completely clear as all the available video is reviewed for evidentiary purposes," Clark County Undersheriff Kevin McMahill told reporters. "We'll see very, very clearly exactly what happened on this incident."

Bennett said on a Twitter message titled "Dear World," that police "singled me out and pointed their guns at me for doing nothing more than simply being a black man in the wrong place at the wrong time."
McMahill aired a lengthy video clip taken from a police sergeant's body camera during a search of the Cromwell casino after a report of gunfire at the Drai's nightclub. But he said at least one officer who encountered Bennett didn't have his body camera on at the time.

Bennett isn't seen until the very end of the clip — being handcuffed as he lies prone in a traffic lane on Las Vegas Boulevard.

McMahill said that with an internal affairs investigation just beginning, he saw "no evidence that race played any role in this incident."

Police and casino officials later attributed the report of gunfire to the sharp sound of velvet rope stands being knocked to a tile floor.

Bennett, during a brief appearance Wednesday at the Seahawks' practice facility in Renton, Washington, described the incident as "traumatic" but declined to go into specifics about it.

"It's a traumatic experience for me, my family and it sucks that the country that we live in now sometimes you get profiled for the color of your skin," Bennett said. "Do I think every police officer is bad? No, I don't believe that. Do I believe there are some people out there that judge people by the color of their skin? I do believe that."

"I'm just trying to focus on the game, focus on the task at hand and let everything take care of itself," Bennett said. "But like I said this is a tragic situation for me, I hate to be up here at this moment. There is a lot of people who experienced what I experienced at that point, at that moment and they're not here to tell their story."

Bennett, a 6-foot-4 defensive end who has been a leader of the national anthem protests started by former 49ers quarterback Colin Kaepernick, said he was among several hundred people running away.
In his Twitter message, Bennett said he was handcuffed face-down on the ground after an officer held a gun to his head saying he would blow his head off if he moved.

"All I could think of was 'I'm going to die for no other reason than I am black and my skin color is somehow a threat,'" he wrote. He said he thought of his wife and children.

Bennett said he was taken to the back of a police car "until they apparently realized I was not a thug, common criminal or ordinary black man but Michael Bennett a famous professional football player." He was released without charges.

A video posted by celebrity news site TMZ shows a view from a balcony as a police officer kneels on the back of a man who looks like Bennett. Protests are heard, including, "I wasn't doing nothing," and, "I was here with my friends. They told us to get out and everybody ran."

Bennett's attorney, John Burris in Oakland, California, confirmed the words were Bennett's. The attorney said he believed the 30-second video clip showed some of how his client was treated.

"We think there was an unlawful detention and the use of excessive force, with a gun put to his head," Burris told The Associated Press. "He was just in the crowd. He doesn't drink or do drugs. He wasn't in a fight. He wasn't resisting. He did nothing more or less than anyone in the crowd."

Burris said Bennett waited to make public his account of the incident until after Burris contacted Las Vegas police last week by letter and email, seeking police records of Bennett's detention.
McMahill said he had no knowledge of any letter or email last week from Bennett or Burris.

Bennett's brother, Martellus Bennett, who plays for the Green Bay Packers, posted an Instagram account of a telephone call he said he got from Michael Bennett. He said he heard fear in his brother's voice.

Via @mosesbread72 the call that night was a scary one. The emotion and the thought of almost losing you because of the way you look left me in one of the saddest places ever. I could hear the fear in your voice, the tears in your eyes as well your sprinting heart beat. I can't imagine how the people who lost their loved ones felt when they got the call. A lot of people feel like it couldn't happen to them because of status, neighborhood ("tghat only happens in the hood") or whatever, but it all honesty YOU could be next. I COULD BE NEXT. YOUR SON, DAUGHTER, BROTHER, FATHER, GRANDPA, SISTER, COUSIN could be next. I'm sad that you have to share this type of experience with the world but at the same time I'm happy that it happened to you and you lived to talk about it because we all know you're going to talk about it. Lol. The conversation is growing and I'm glad your voice is one of the ones being heard. You are as real as they come, well at least how they used to come. I encourage you to Continue telling your story and the stories of those that came before. I love you very much @mosesbread72 to me you're much more than a nigger.

"The emotion and the thought of almost losing you because of the way you look left me in one of the saddest places ever," Martellus Bennett said.

Michael Bennett has been one of the most outspoken pro athletes on numerous social issues. Last month, he held a benefit for the family of a pregnant black woman who was fatally shot by two white Seattle police officers in June. Police said the woman threatened the officers with at least one knife after calling 911 to report that someone had broken into her apartment and stolen video-game consoles.

Advocates on Wednesday cited Bennett's treatment by police as an illustration of troubled race relations in America.

Patrisse Cullors, a co-founder of the Black Lives Matter advocacy group, called it "a testament to the police violence targeting black people in the United States."

Cullors endorsed an online petition calling for Las Vegas police to release information about what she called an assault on Bennett.

Seattle NAACP and the Social Equality Educators will hold a rally at 11 a.m. Sept. 17.