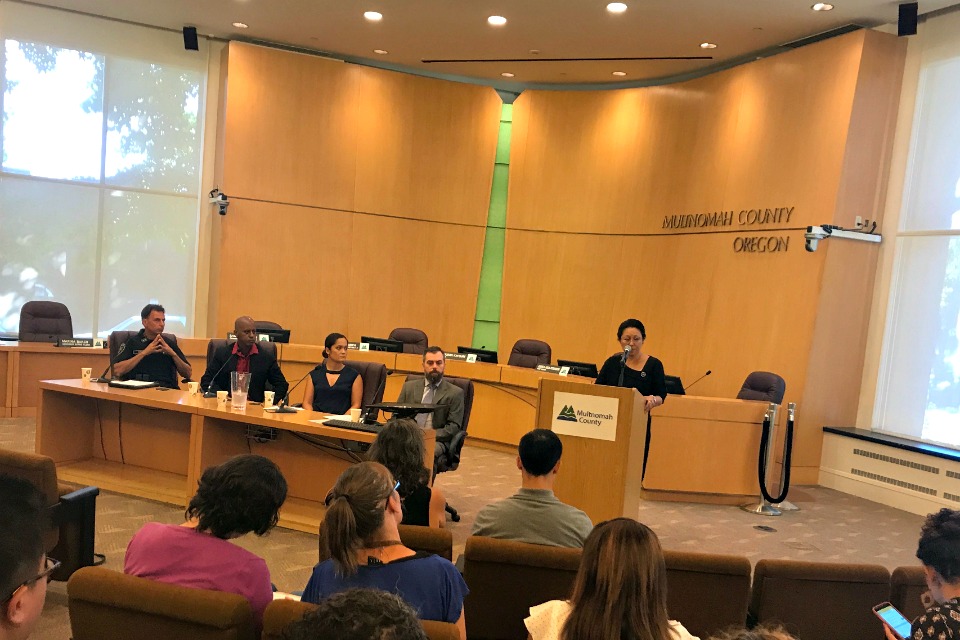 Mat dos Santos admitted he was tense as a Friday morning community forum on immigration began.

But dos Santos opened his remarks noting the immigrants’ rights community was also waiting to hear what would happen to the Deferred Action for Childhood Arrivals program, or DACA. President Trump had, earlier in the week, hinted he would be ending the program, which shields immigrants who were brought to the United States from deportation and offers them work permits and the opportunity to attend school. The Trump administration made good on last week’s threats Tuesday, with an announcement that DACA’s protections would be phased out within six months. The president has also called on Congress to replace the act.

“It just feels like a very heavy day in the immigrant rights community,” dos Santos said.

That law, which restricts the ability of local law enforcement to enforce federal immigration laws, was passed in 1987 with strong bipartisan support, Williams said.

So far the US Inc. contribution is one of a small number of out-of-state contributions listed on Orestar. The petition committee is run by Republican State Representatives Greg Barreto of Cove, Mike Nearman of Independence and Sal Esquivel of Medford.

Williams said the petition is still under judicial review, but immigration rights activists expect it to gather the 88,000 signatures necessary to make it to the ballot.

IP 22 is similar to Texas’ SB 4, which bans sanctuary cities and requires local law enforcement to enforce immigration law. Texas’ law was struck down by a federal court last week, but dos Santos expects Texas’ government to appeal the ruling.

“SB 4 turns police into something else, something they don’t want to be,” dos Santos said. “Police need people to report crime and to act as witnesses.”

Stegmann said she convened the forum because she’s concerned about the future of the Texas law and because Oregonians shouldn’t assume they are safe from this form of discrimination. Stegmann, who was adopted as an infant from Korea, said she’s also concerned about the effects of tighter immigration laws on her own family. Laws like SB 4 and IP 22 would make it possible for campus security officers to profile her daughter, who just began her freshman year of college, because of the way she looks.

Dos Santos said in Texas immigrants have become reluctant to report crimes – and immigrants affected by Hurricane Harvey have been afraid to ask for social services – because they are afraid local law enforcement will turn them in to immigration enforcement officers.

“Reese’s comments stressed that the sheriff’s office does not currently have a role in enforcing immigration law, and that he believes the office has a “fundamental responsibility to nurture a feeling of trust with all in our community.”

Williams’ organization has reached out to rural communities with large immigrant populations about creating sanctuary city initiatives, and has received positive responses that cross partisan lines.

She also encouraged those interested in helping defeat the measure to join the One Oregon Coalition, which includes the Democratic Party of Oregon as well as a wide variety of progressive organizations, racial justice groups and labor unions. Immigrants’ rights advocates are also holding rallies – two of which have taken place in Portland this week – and Know Your Rights trainings for immigrants.

Jama, who emigrated to the U.S. from Somalia during the civil war, said laws like SB 4 and IP 22 effectively create “martial law” for immigrants. He also said he’s proud of Oregon, which he believes is “on a different path” than other states and hopes to build on that work.

“Policies and bills like SB4, it’s intended to tear apart our communities -- citizens against immigrants, police against refugees and immigrants,” Jama said.

“It’s not going to be the first or last time this comes up,” Williams said. “The federal government is trying to coerce states to go along with its agenda.”