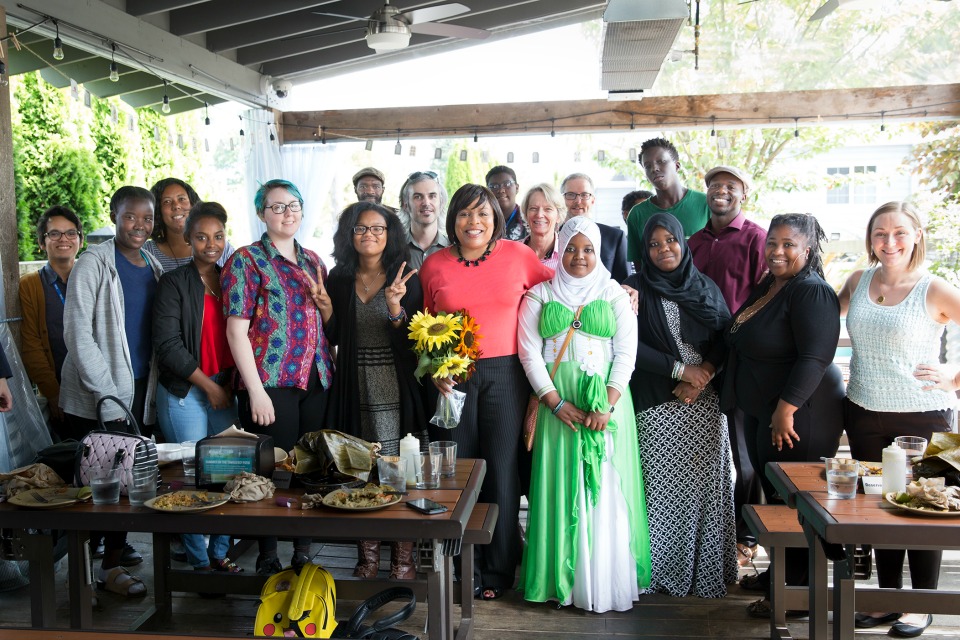 SummerWorks applauded some 30 interns it helped employ this summer during a special luncheon at Tamale Boy in North Portland last week.

David Douglas High School student Guwo Duku participated in an internship at Dress for Success. The organization, which provides donated professional attire for women, is one of the program’s 550 worksites across private sector companies, nonprofits, city bureaus and county departments.

Duku told The Skanner that she’s looking to pursue a career in the medical field, but has always had an interest in fashion. For her, interning at Dress for Success was an incredibly welcoming experience.

“I like how everyone is super kind. They treat you like a part of the team, and you never feel left out,” said Duku, who will be a junior at in the fall.

A program of Worksystems Inc., SummerWorks secured funding to provide paid internships for some 1,154 teens and young adults this year. Youths between the ages of 16 and 24 in Multnomah and Washington counties are eligible to apply.

Established eight years ago through the Obama administration’s American Recovery and Reinvestment Act, SummerWorks had initially served 1,300 youths. Federal funding is no longer available, but the program has made considerable strides with multiple partnerships and expanding its sponsorship through Multnomah County and the city of Portland.

This year, SummerWorks placed the highest number of youths since its 2009 launch.

It’s also hit some noteworthy milestones over the years, including 89 percent of youth completing their internships and receiving positive evaluation from their supervisors; and 93 percent of youth returning to high school, post-secondary school or becoming employed.

While the job placement runs from Jun. 1 to Sept. 30 each year, SummerWorks first provides work-readiness and soft skills training in the month preceding. With the help of its partner, Immigrant & Refugee Community Organization, the program then matches the young participants with suitable employers based on their skills and preferences.

The target is that each participant will contribute 180 work hours to their job placement over the course of four months. The pace is steady and manageable, said SummerWorks coach Mukendi Kim of IRCO, but that’s a deliberate choice.

“The slow process helps the participants absorb more of the skills,” Kim said.

Worksystems Inc. reports that over the past 10 years, summer youth employment has dropped from 44 percent to 26 percent. Among diverse and low-income youth, employment is as low as 12 percent

That’s why over 90 percent of SummerWorks participants are low-income, while 76 percent are youth of color.

During last week's luncheon, Multnomah County Commissioner Loretta Smith shared a few words with the young interns, urging them to value “how important that first job experience is for your future career.”

Accruing employment after the internship is finished is also a hopeful goal of SummerWorks. So far, two internships – one with Central Division and the other with Portland Opportunities Industrialization Center – will turn into official jobs in the fall for two of the program’s participants.

Among employers present at the luncheon was Unity Farm – the Oregon Food Bank’s 33rd Avenue farm run by Shantae Johnson and Arthur Shavers, who operate their nonprofit MudBone Grown from the property.

During the summer, interns harvested vegetables, learned about irrigation, prepared CSA boxes for families in the Cully neighborhood, built picnic tables and more.

“We want SummerWorks to be more than just a summer job,” said Barbara Timper, youth services manager at Worksystems Inc.

Over the years staff has worked to refine the program, such as improving its soft skills and financial literacy training. SummerWorks also hosts a job fair, as well as end-of-summer events where interns have the opportunity to assess and speak about their experiences.

Commissioner Smith is also looking for feedback. During her closing remarks, she encouraged participants to send her their impressions of SummerWorks, to help better the program for everyone involved.

“If there’s only one thing I could do, SummerWorks would be it,” said Smith.