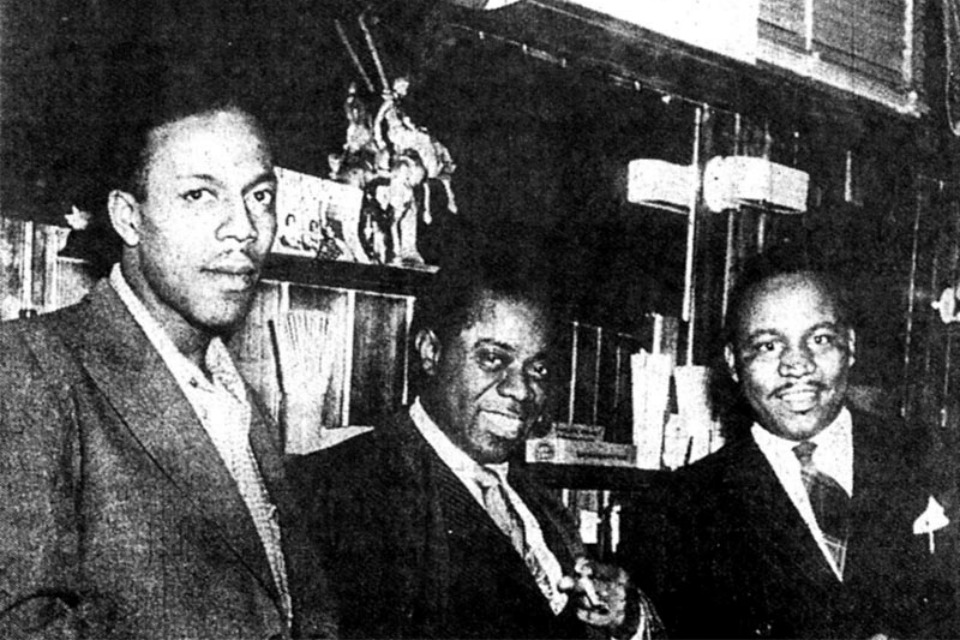 Stephen Hanks’ father, Zane, moved to Oregon in 1952. He was in the Navy and was stationed in Astoria. But on the weekends he would come to Portland and visit the jazz clubs.

In the 1940s and 1950s Portland’s North Williams Avenue was known as “Jumptown” or “Black Broadway.” The neighborhood was dotted with jazz clubs that attracted the hottest jazz performers from all over the country, and acted as an incubator for local talent.

Due to his parents’ love of music – Hanks’ mother was also a jazz fan, and his parents owned a club in downtown Portland in the 1970s and 1980s called the Jazz Nest.  Hanks grew up listening to jazz and learning about it. He admits, though, that he was late in connecting with the music itself.

“I didn’t really get into jazz too much until I heard the jazz fusion. When I heard Herbie Hancock and the Head Hunters and George Benson -- that’s what really made me get interested in jazz,” Hanks said.

Hanks also runs the Portland Pioneers of Color Walking Tours, which takes regular walking tours through Albina and downtown Portland. About a year ago, he had the idea to combine his love of music and his interest in history, and start a jazz festival that would pay tribute to jazz clubs in Albina.

The Albina Jazz Festival takes place this Saturday and Sunday at the Stingray Café in the Left Bank Building on North Broadway – a venue Hanks specifically chose because of its connection to Portland jazz history.

In 1945 the building, now known as the Left Bank Building, housed the Dude Ranch, which was open for less than a year, but which historians consider the birthplace of the Portland jazz scene.

“There never was and there never will be anything quite like the Dude Ranch,” writes historian Robert Dietsche in the 2005 book, Jump Town: the Golden Years of Portland Jazz, 1942-1957. “It was the Cotton Club, the Apollo Theater, Las Vegas, the Wild West rolled into one. It was the shooting star in the history of Portland jazz, a meteor bursting with an array of the best Black and Tan entertainment this town has ever seen: strippers, then called shake dancers, ventriloquists, comics, jugglers, torch singers, world-renowned tap dancers like Teddy Hale, and of course the very best of jazz.”

“The jazz that came in during the World War II era, it was what we call now modern jazz,” Hanks said. “At that time it was called bop, or bebop, and it was just the hottest thing going on. And so that’s what came out of Albina.”

All the neighborhood’s other night clubs were casualties of a series of urban renewal projects that also destroyed hundreds of homes and the rest of Albina’s business district, which thrived well into the 1970s.

In addition to boasting several thriving venues, the Albina jazz scene was a close-knit community. For example, Hanks said, nationally known Black musicians played the downtown clubs in the 1940s and 1950s, but they couldn’t rent hotel rooms in segregated Portland. They relied on a network of people in Albina to pick them up at the airport and provide them with places to stay.

While the 1940s and 1950s are regarded as the “golden age” of Portland jazz, Albina’s scene thrived through the following decades, and the festival will feature some musicians who came up in Portland jazz during the 1960s and 1970s.

Drummer Ron Steen, who hosts weekly jam sessions at Clyde’s Prime Rib and plays regularly at Wilfs and Augustana Lutheran Church’s jazz gospel service, grew up on Vancouver Avenue, and started playing in Portland clubs as a teenager. He would cross the street to play at Paul Knauls’ Cotton Club. He had the chance to see jazz legends like Thelonius Monk – and was mentored by a host of jazz luminaries including Mel Brown, Thara Memory and journalist, musician and club owner Bill McClendon.

“All these people were not just musicians. They were just like surrogate parents in a lot of ways,” Steen told The Skanner.

Dennis Bradford also came up in Portland’s jazz scene, mentored by his father, jazz trumpeter Bobby Bradford. The younger Bradford started playing drums when he was just eight years old, and his career has taken him all over the world. He lived and played music in Japan for 27 years, and while he moved back to Portland to be nearer family five years ago, he still travels heavily for work.

Traveling is part of life for a working musician, he said, but he said the difference between Portland’s jazz scene in the 1970s versus now is “like night and day.”

Both Bradford and Steen will play at this weekend’s festival, which Hanks said was inspired by his dad’s stories and which is dedicated to the memory of his mother, Fern McCoy Hanks.

When approached to play at the festival, Bradford was eager to play locally again.

The Stingray Café is located at 240 N. Broadway. Tickets are $10 and are available at the door. For more information, visit Albinajazzfestival.com.