Ulanda Watkins Sworn in as Judge of Clackamas Court 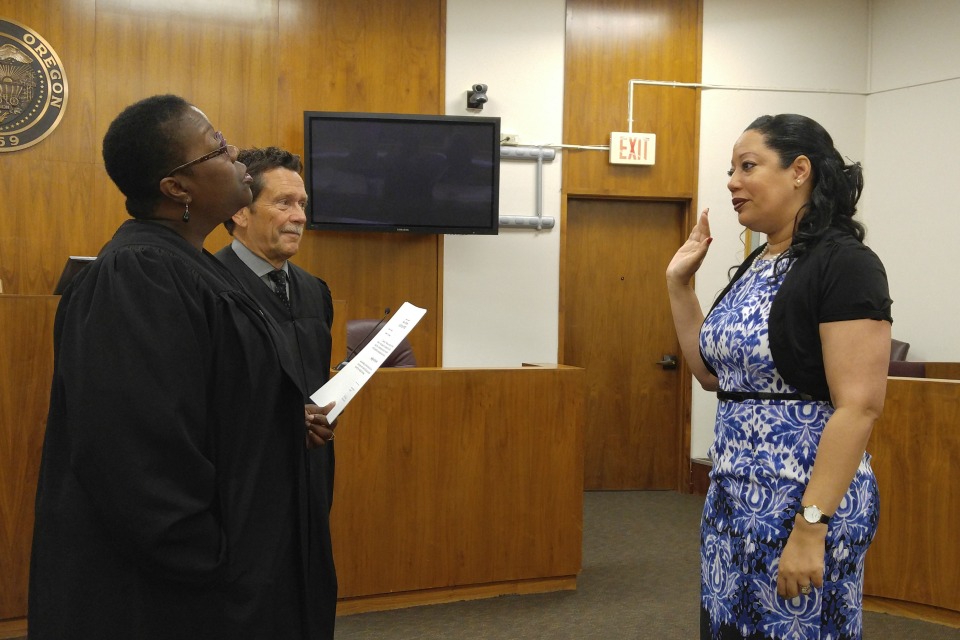 Before an intimate crowd of friends and colleagues on Tuesday, Ulanda Watkins was sworn in as judge of Clackamas County Circuit Court, one of 36 trial courts in the state system.

Watkins, a former defense lawyer and managing attorney at insurance firm GEICO, is among eight judges Gov. Kate Brown recently appointed to Multnomah and Clackamas County Circuit Courts, as well as the Oregon Court of Appeals.

The Portland native is the only judge of color in Clackamas and the third Black woman judge on the Oregon state bench. She is also the first African American judge to sit on the bench outside of Multnomah County.

Watkins will officially take on her role beginning Aug. 14. In the days before her swearing in, she spoke with The Skanner about her precedent-setting appointment and her eagerness to return to the courtroom. This interview was been edited for space and clarity. 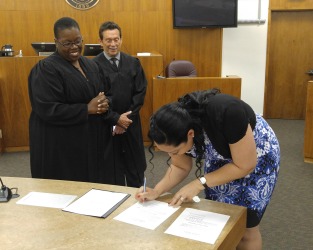 TSN: Tell me a little bit about your background. How did you get into law?

UW: I went to Wilson High School and they have a street law class that they still offer to students at Portland Public Schools. I was a member of our team, and all the teams complete at the county level, then at the state level. I remember representing Wilson and I had a specific role of doing the opening statement. I enjoyed that so much. I thought, how awesome to have a career where I can argue and get paid for it. So that sparked my interest. Then at some point, I think it was maybe my freshman year at college, I (decided) I wanted to go to law school. So I kept that in mind throughout my undergrad.

I applied and got into both the Willamette University College of Law and Lewis & Clark Law School. I decide on Lewis & Clark because it was in Portland and I had a two-year old at the time. So I needed to be somewhere where I had family support because law school is so intense. It’s boot camp for lawyers. It’s grueling (laughs).

TSN: You worked as a defense lawyer before you joined GEICO. How did that experience compare to your work at the insurance firm?

UW: I worked with judge Ken Walker and attorney Ernie Warren (of Walker, Warren and Watkins). At the time they were among the first African American-owned firms. I did criminal law and worked with those guys for 15 years before coming to GEICO. We represented people charged with crimes at the state and federal level. But the majority of what I did during my time there was criminal defense work and plaintiff personal injury.

Part of the reason I wanted to be a lawyer was so I could be a litigator, because I love being in the courtroom. So being a defense lawyer was a fantastic experience – you get to help people, there’s never the same case twice, you go to court daily. It was amazing. Before law school, I did juvenile delinquency work and I really loved that because you have contact with kids and you can be a mentor and help them out of their situation.

I loved defending people. It was rewarding for me knowing that I got to help people through a tough situation and get the best results for them that’s possible.

When I came to GEICO, I started doing person injury, but on the defense side. As the managing attorney I worked long hours and was responsible for every file in the office. If you have GEICO insurance and you someone hits you in a car accident, then my office would represent you in court and defend you on that lawsuit.

TSN: Gov. Brown appointed you a judge of the Clackamas County Circuit court. How does one go from being a lawyer to a judge?

UW: You are either appointed or you run for office. In my case I was appointed. For me, I think all of the times I’ve spent in the courtroom are going to help. Being familiar with how trials are conducted and how people are charged, and what it takes to have probable cause and understanding the rules of evidence, all that is going to make this an easier transition for me.

Clackamas judges all handle family law and that’s an area I’ve never practiced, so there’s going to be a learning curve for me in that respect. All of the judges in Clackamas do a rotation, so they all hear criminal cases, civil cases and family law cases; unlike Multnomah County, which separates the cases. But every single judge in that court has already reached out to me and offered to help in any way. It’s amazing how supportive this group of judges is.

TSN: You’re a member of Oregon Minority Lawyers Association. What does that entail?

UT: It was one of the first minority lawyer organizations that we created for lawyers of color to support each other and further the goal of diversifying the state of Oregon. Since then, we have so many more organizations – the Black Lawyers Association, the Filipino American Lawyers Association, the Asian Pacific American Bar Association, and the Hispanic Bar Association. I’m proud to say that we are increasing the diversity in Oregon – and we’re increasing it so much that now we have all these other groups, which are phenomenal.

TSN: You will be the only judge of color in the Clackamas County Circuit Court – and only the third Black woman judge on the Oregon state bench. What does that mean to you?

UW: I don’t even know if I have words to describe it, how overwhelming it is. I also found out that I’m the first African American judge to sit on the bench outside of Multnomah County. It’s amazing. I feel so honored, so privileged to be a part of that group of judges the Gov. Brown appointed. I’m living my dream right now.