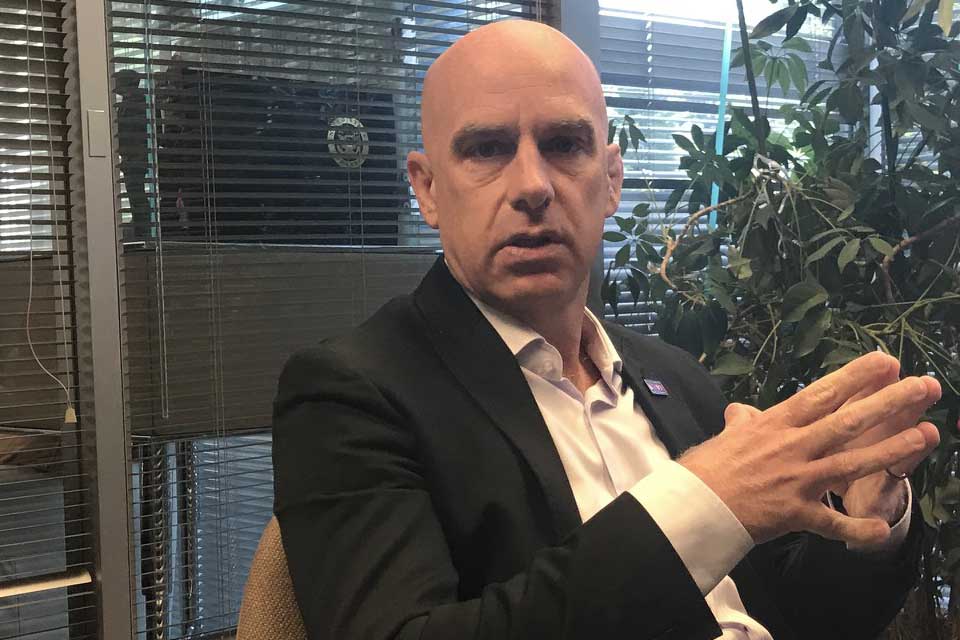 When Mike Myers left the Las Vegas Fire Department 2013, where he’d served as chief since 2011, he found he was nowhere near ready for retirement.

Myers, now 50 moved to Chicago, then to Montgomery, Florida, but found himself restless and decided to re-enter the job market.

“It was just boring,” he said of retirement.

First he moved to St. Charles, Missouri, outside St. Louis, and took a job in that city’s fire department. Then Portland Fire and Rescue announced it was searching for a new chief, and he jumped at the chance. Myers and his wife – with whom, for several years, he ran a travel blog that featured photos of the couple kissing at destinations around the world -- had been eager to relocate to the Northwest.

He’s also proposing a way to respond to non-emergency calls he says hasn’t been tried anywhere else in the United States.

Myers said about 80 percent of calls the fire department responds to are urgent, but not in a category that would require a paramedic’s response – including non-emergency medical calls. Numbers released by Portland Fire & Rescue in response to a request  for more detaiedl list “rescue and EMS,” which made up the largest category in fiscal year 2016-17. Calls in that category numbered 52,341 out of 85,866 total calls. At  61 percent, it is the largest total category, but doesn’t break the calls into emergency or non-emergency categories.

But categories that clearly don’t qualify as emergencies made up a large share of the remaining 39 percent of calls. These include “good intent calls” (emergency calls that turn out to be non-urgent, such as reports of controlled burns or people sleeping), which made up 16 percent of calls; service calls (such as assisting seniors who have fallen or responding to animal problems or rescues), which made up 8.7 percent of calls; false alarms (7.9 percent) or reports of hazardous conditions such as gas leaks or downed power lines (2.6 percent). Just 3 percent of incidents involved fighting fire.

Since fire department personnel are often the first to respond to 911 calls of all kinds, they get a firsthand glimpse of major social problems – many of which paramedics and firefighters aren’t well suited to address.

“I can do everything for the cardiac arrest patient,” Myers said, or for a family whose kitchen has caught on fire. But for residents whose needs may be more complex, it’s necessary to go upstream and look at the underlying causes of public health issues.

Myers also noted that each fire station is staffed, equipped and trained the same way, though the neighborhoods they serve may have different needs.

With both of those problems in mind, he’s proposed creating "blueprints for success" for each of the city's fire management areas, each of which overlays several neighborhoods. According to Aaron Johnson, communication director for Portland Fire & Rescue, the agency currently has a three-person team working on data collection for each fire station’s response area.  And the team is working with Multnomah County Public Health, and local and regional nonprofit and neighborhood organizations to create prevention and response plans specific to each neighborhood.

While data are being gathered for all districts, the agency has designated two stations -- Station 22, which serves St. Johns, and Station 25, which serves several neighborhoods in Southeast Portland including Foster-Powell, Creston-Kenilworth and Woodstock – to pilot the fire management area concept. St. Johns was chosen because it has a well-organized neighborhood emergency team. Station 25 was chosen because it has one of the highest fire death rates in the city, Myers said. Since the program is being built from scratch, he said there’s value in working with well-established groups on emergency response – and while Portland Fire & Rescue is concerned with many public health issues, reducing fire deaths is still a top priority.

It’s new -- Myers said no other fire department in the country has tried it -- but not without precedent. The fire management area concept is in fact derived from a model in the United Kingdom. The agency is planning a work session for Sept. 26 which will include personnel from Harvard’s School of Public Health, Multnomah County Public Health and the Gloucestershire Fire and Rescue Service.

Myers expects the program won’t increase costs – and should lead to savings down the road.

“The intent is that this project over time will not increase costs and is intended to reduce long-term spending projections,” Myers said. “It is less expensive to prevent a call from happening than it is to continuously add more reaction-based capital.”

Myers is a rare hire for the fire department, which is more likely to promote from within rather than to hire a fire chief from outside.

In a May 2016 Oregonian profile, the Portland Firefighters Association expressed cautious optimism about Myers. Union leaders said they were disappointed the city didn’t promote from the department’s rank and file, and were apprehensive about Myers due to a 2012 no-confidence vote from the Las Vegas firefighters’ union over having outside consultants evaluate the agency. Earlier this year, Myers made headlines after sidelining a decision to embed emergency medical technicians with police, in apparent agreement with citizens who said having EMTs dress similarly to riot cops was inappropriate.

Editor's note: This story has been edited from an earlier version to clarify the role and definition of fire management areas.