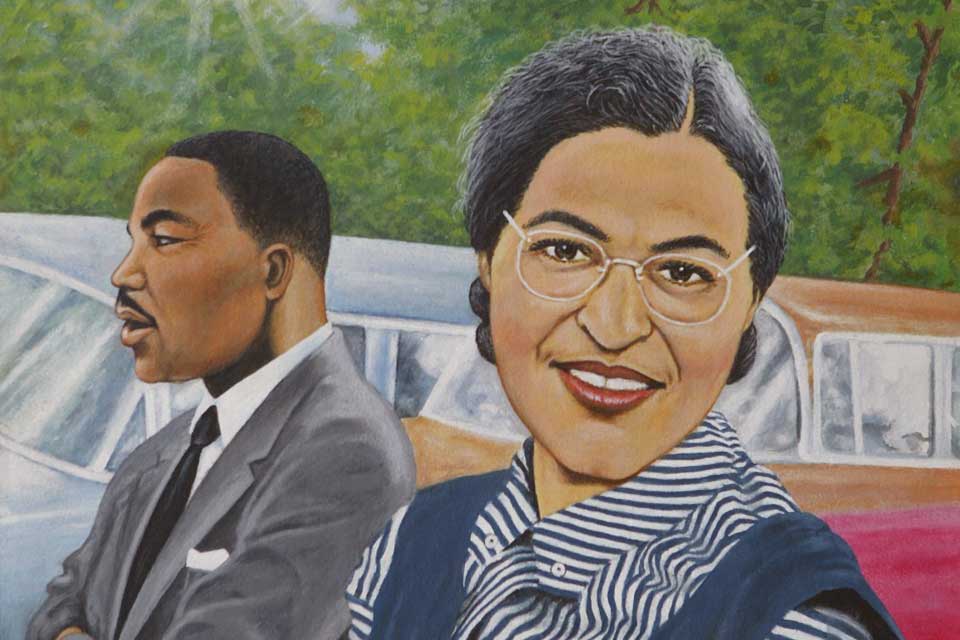 Local African American painter Henry Frison will exhibit close to 20 portraits at the end of the month, in what will be the artist’s first solo show.

Opening on July 29 at greenHAUS Gallery and Boutique in North Portland, Frison’s intimate portraits of iconic Black figures – President Obama, Rosa Parks and Michael Jackson among them – will be on display until the end of summer.

“I want Henry to feel the respect of the masses, and not because he’s an elderly Black man, but because it should have been provided 40 years ago,” said Cole Reed, owner of greenHAUS.

At 77 Frison is primarily known as a Portland mural artist and one of seven Black painters that collaborated on the Albina Mural Project from 1978 – a work of five 20 foot by 20 foot murals, spearheaded by artist Isaka Shamsud-Din.

At the corner of North Vancouver Avenue and Northeast Alberta Street, the murals depicted a series of pivotal points in Black history, including the transatlantic slave trade, the Great Migration of African Americans to northern and western states and the Vanport flood of 1948.

Frison’s panel, “Civil Rights” – which included thematic images of Martin Luther King Jr. and Ralph Abernathy – was the first to be completed in February 1978. The four additional mural panels followed later that summer.

His second contribution, “Black Cowboys,” told stories of the timber industry, cattle ranches and dairy farms, as well as the relationship between recently migrated African Americans and the indigenous people of the Northwest.

No stranger to cowboys, Frison spent part of his childhood living on a ranch in his native town of Bellinger, Texas.

Growing up, Frison said he was always sketching – mostly boyhood fascinations like Mighty Mouse and other cartoon characters. But as he matured, he discovered his gift for rendering images of people.

“Drawing people was always a challenge to try to capture each person,” Frison told The Skanner. “Everybody is really unique in their own right, but that’s why I love portrait painting.”

As a young man Frison moved to New Mexico, where he lived for 10 years and worked at a cotton compress.

In 1965, at the age of 25, he landed in Portland and found work at steel foundry. After suffering an illness that put him out of work, Frison enrolled in the now-closed Advertising Art School.

It was there that he learned the art of sign painting, which would later inform his large-format skills for murals. He also graduated from sketching with charcoal pencils to painting with oils.

Robin Dunitz is a mural historian who used to give mural tours through the Mural Conservancy of Los Angeles. “We tried to educate people how murals were a way to present different cultures and to show the artistic talents of a diversity of people in a city,” said Dunitz, who now resides in Portland.

In a similar spirit, this year marks the 50th anniversary of Chicago’s 1967 “Wall of Respect,” and several mural programs across the nation are acknowledging its influence on community mural movements. Composed by 14 artists, “Wall of Respect” is a montage of portraits depicting close to a dozen Black heroes in various fields such as music, sports and politics.

“Artists of color have historically been excluded from a lot of mainstream galleries and museums,” continued Dunitz. “So the streets became their gallery.”

According to Frison, he was never asked to exhibit his work in Portland’s downtown galleries. One of the reasons, he said, was because his prices were too low.

Dunitz and muralist Joanne Oleksiak curated the 2010 exhibit "Walls of Heritage, Walls of Pride: African American Murals” for the Oregon Historical Society, which included work from the Albina Mural Project. The exhibit is also reflected in Dunitz’s book of the same name, co-authored by Jim Prigoff.

Some images featured in “Walls of Heritage” will be included in an upcoming exhibit on the Black Power movement at London’s Tate Museum.

The downside to historic muraling, however, it that many artists did not create the work with the long term in mind, said Dunitz.

Less than 10 years after the visual landmarks of the Albina neighborhood were completed, the very artists who put them up were asked to take them down. Painted on particle board, the murals had suffered severe damage from Portland’s rainy climate.

While Frison’s show at greenHAUS will honor legendary Black lives through his personalized portraits, it’s also a chance to celebrate the artist’s contribution to a city that has suffered major cultural blows due to gentrification.

“It was so important for us to have him, because he’s an iconic figure. And unfortunately iconic figures aren’t often recognized as being iconic,” said Reed. “He gave me the privilege of having it in my space. Henry is the kindling to our society that we need.”

Some of Frison’s originals and prints will be for sale at greenHAUS Gallery and Boutique, as well as mugs and T-shirts that feature his artwork.