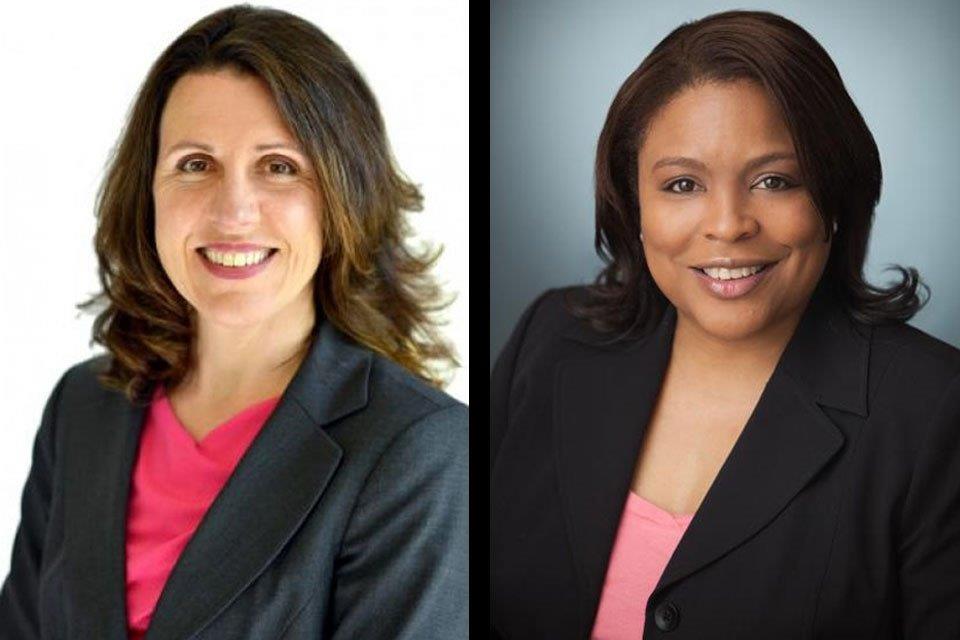 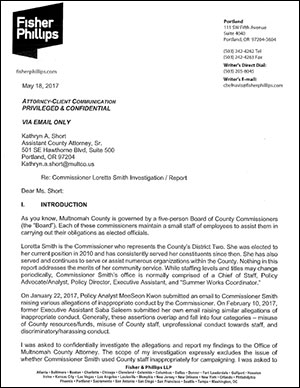 Click image to read the final reportAfter two former employees of Multnomah County Commissioner Loretta Smith came forward with allegations of misconduct by the commissioner, an outside investigation has concluded a report on the claims, first reported on by Willamette Week today.

Smith has denied any wrongdoing, and according to the investigation’s final report – dated May 18, 2017 and conducted by Clarence M. Belnavis, partner at law firm Fisher Phillips LLP – “This was supported by the statements of several witnesses. However, there are several staff members who have raised serious concerns about their interactions with her.”

The allegations made by MeeSeon Kwon on Jan. 22, followed by Saba Saleem on Feb. 10, were first made public by emails sent from the employees to the Willamette Week.

Both letters contained accusations that Smith had misused county resources, funds and staff for her personal campaign events, and used unprofessional conduct – including discriminatory behavior and harassment – towards her staff.

In the wake of Kwon’s complaint, Commissioner Smith requested that human resources investigate the employee’s claims.

On April 5, the county paid Kwon a settlement of $23,820, which included attorney fees, plus six months’ administrative leave.

While Smith rescinded her initial request, the county’s investigation – totaling $11,353.50 – continued with Belnavis as outside investigator. It prompted the commissioner to file a tort claim notice against the county on April 21 for a cease and desist of the investigation.

“The thousands of dollars that Chair Kafoury has spent on this investigation could have been spent to increase the number of SummerWorks jobs for underserved kids in our community,” Smith told The Skanner. “It’s a shame.”

The county disclosed that the initial bill for the attorney representing Commissioner Smith through May 20 is $3,740.66.

In a written statement sent to The Skanner, Smith did not respond to the report’s finding directly, but mentioned her recent accomplishments as commissioner and highlighted some of the big challenges the county faces, including over-policing of communities of color, displacement of residents, and gentrification.

“The public should never doubt that I let this misguided process distract me from doing the business of representing the most vulnerable in Multnomah County,” wrote Smith.

In his final 14-page report, Belnavis assessed that Commissioner Smith, “used profanity at/with some of her staff and likely made personal statements that bordered on bullying to some staffers on cultural issues.”

Witnesses interviewed – who chose to remain anonymous and are referred to by number only – cited instances where the commissioner made derogatory comments about Latinos and Muslims.

While Belnavis noted the allegations were difficult to substantiate because the witnesses said they occurred during one-on-one meeting, “there does appear to be a pattern that indicates that Commissioner Smith likely shared her personal, cultural or ethnic views with her staff in what she likely believed were personal conversations. To the extent that this happened, such conduct was inappropriate given that these conversations occurred in the workplace.”

According to the Bureau of Labor and Industries, employees of elected officials can file official complaints of misconduct against their bosses. But Charlie Burr, communications director at BOLI, told The Skanner that the bureau has not received any complaints regarding Smith.

In the report, Belnavis also noted that no employees raised complaints about their boss with the county’s human resources department.

Significant in Kwon’s claims was her accusation that the commissioner had used county staff for her personal campaign events – then asked them to sign non-disclosure agreements to cover her tracks.

In the report’s conclusion, Belnavis states, “While many of the individual claims could not be substantiated, it does appear that Commissioner Smith (and perhaps her Chiefs of Staff) assumed that staff could use vacation/personal time to support the Commissioner at personal/campaign events.”

But Al Appollito, special assistant to Oregon’s Secretary of State, said this happens all the time.

“It in no way violates state law if they campaign on their own time; vacation time is their time,” Appollito told The Skanner.

Furthermore, Belnavis states that the non-disclosure agreements were in fact prepared with the office of the county attorney.

(ORS 260.432 states that a public employee may not – while on the job during working hours – promote or oppose election petitions, candidates, political committees or ballot measures.)

In her statement, Smith said she intends to respond to Graves’ letter, “regarding my concerns with how the entire matter was handled, including the motivations behind it.”

Smith still ascertains that the investigation at the chair’s request was “politically and racially motivated.”

Since county law forbids the chair from punishing, disciplining, or firing an elected official, Commissioner Smith could only be removed from her office through the filing of a recall petition.

In response to the investigation’s findings, Deborah Kafoury made the following statement: “Multnomah County has a duty to employees to address workplace complaints. I am pleased the county’s process has been followed, an investigation has been conducted and we can move forward.”

Smith’s chief of staff, Elizabeth Mazzara Myers, told The Skanner that Smith’s tort claim notice is still valid – and that the commissioner is considering all options.