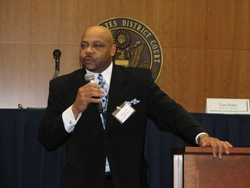 To the people who worked closely with John Canda, he was the man who could and would go the distance for Portland youth. With his knowledge of street culture and the pressures that push kids into gangs and into trouble, Canda had the credibility to bring all the players to the table.
In a time of scarce funding, when gang outreach money had been cut to the bone, Canda was able to reboot the system, said Oregon Outreach Director Rebecca Black.
"John was making collaborations happen again," she said.
Yet last week Canda was forced to hand in his resignation or face being fired from his leadership position at the Office of Youth Violence Prevention in the Mayor's office. John Doussard, Mayor Tom Potter's spokesperson, cited a "list of performance issues" given to Canda on May 17 that "haven't been addressed in the intervening months."
Doussard confirmed that two issues behind the forced resignation were that Canda was spending too little time in the office and that he was difficult to track down. Other details surrounding Canda's resignation are private, Doussard said, but the crux of the matter was that Potter felt Canda wasn't a good fit for the job.
And he wasn't, says Tonya Dickens. That is to say, she clarified, Canda wasn't a good fit for any office – he's a street-oriented outreach worker.
"John is probably the father of gang outreach (in Portland)," said Dickens, who runs Brother's and Sister's Keepers, one of the organizations that receive grant money from the Office of Youth Violence Prevention. "I learned outreach through the work of John Canda."
Both Dickens and Black say the best kind of outreach happens on the streets, not behind a desk. Outreach work is about knowing names of gang members, being there at 3 a.m. to quell rising tempers or talk the gun out of someone's hand.
"Anybody that has a passion to do what we do" is hard to find, said Dickens, especially a leader in the Mayor's office. Black said she found John working nights and weekends, going out during curfew sweeps, attending community barbecues and talking to gang members and their prospects where they were – on the streets.
"He's not a guy to sit behind a desk and push papers," Black said. "He's a hands-on, 24/7 kind of guy."
So if the mayor was looking for a City-Hall kind of guy – more an administrator than an inspirational grassroots youth worker — he might have been right: Canda did not seem suited to that lifestyle. And if Canda did work outside the office often and Potter had trouble staying in touch, how do you keep your office accountable, regardless of its performance – excellent or otherwise?
Tom Peavey, a retired Portland police officer, who worked with Canda in the Office of Youth Violence Prevention, wouldn't comment on Canda. He did say the office – which administered $360,000 in grant money to seven community organizations – is very hands-on and has regular meetings every two weeks to discuss what kind of resources they have and need.
Despite the fact that gang membership rose 31.5 percent in Multnomah County over the last three years, according to statistics from the Office of Youth Violence Prevention, Peavey says anti-gang outreach isn't funded like it was back in the 1990s. Now, because of limited money, smaller groups are serving fewer youth with more intensity.
The mayor has pledged to continue funding for the office, but that support is not guaranteed after Potter leaves office in 2008. Peavey said he will go before the council in December to ask for more funding and present the findings of the different programs who now receive the money.
"They're all slightly different in what they offer (demographics and services)," Peavey said. Depending on the results they deliver, different programs could receive money to carry out their own agendas to target at-risk youth. After all, when funding from the office was originally awarded, there were 19 anti-gang groups who didn't receive any money.
Apparently Potter was satisfied with the way Canda set up the Office of Youth Violence Prevention, and praises his outreach work. Doussard said the mayor has no plans to change how the office conducts business.
That's good news, according to Gloria Wiggins, director of El Programa Hispano, a grant recipient. "The program is very well structured," she said. "John and Tom (Peavey) were always on top of things."
Wiggins said Canda has done an exceptional job trying to unite a diverse team of anti-gang workers from different agencies to unite for a common goal. "It shows the guy's doing a good job," she said, adding that it was the first time culturally specific pressure was being applied to the fight against gangs.
Lee Cha, youth services at the Immigrant and Refugee Community Organization, worked closely with the Canda and Peavey to target Asian Pacific gangs.
Anti-gang program directors all agree on one thing – Canda's forced resignation was a surprise.
Everyone who talked to The Skanner for this article said they couldn't think of a single performance-related task that Canda would receive a failing grade on.
So it begs the question: what kind of leader does Potter want for the Office of Youth Violence Prevention?
"It's hard to find someone with the passion and knowledge John has," Wiggins said.
Dickens agrees. In this line of work, you either have what it takes or you find a different career. And she doesn't think Canda will be looking for a new line work.
"It's not a position for John, it's his passion," she said.