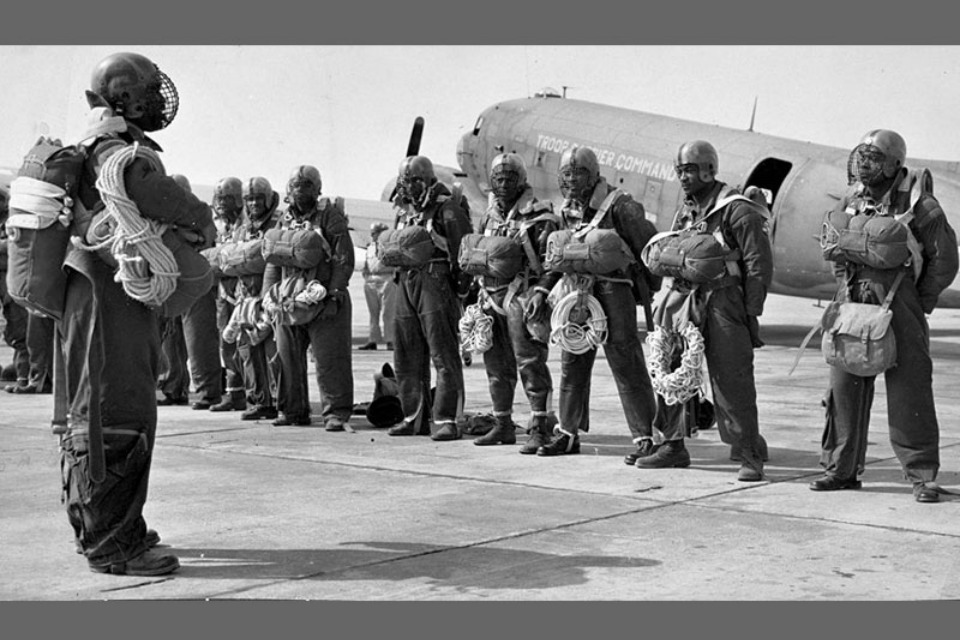 The likely answer is very few. But the courageous tale of the 555th Parachute Infantry Battalion – otherwise known as the Triple Nickles – checks all those boxes and more.

The Nickles were a segregated, all-Black paratroop unit activated during World War II – and the first African Americans in U.S. military history to work as airborne soldiers. Moreover, according the official webpage of the 555th, “the Triple Nickles served in more airborne units, in peace and war, than any other parachute group in history.”

On June 3, Oregon officially commemorated the heroism of the 555th at the Siskiyou Smokejumper Museum, located at the Illinois Valley Airport in Cave Junction.

The commemoration was spearheaded by the Oregon Travel Information Council and the Illinois Valley Community Development Organization, which has worked to boost local business, develop tourism, and propose a number of historic markers.

In 2015, the IVCDO partnered with the National Park Service to commemorate the invention of the Viewmaster by Oregon inventors William B. Gruber and Harold J., with a historical marker at the Oregon Caves National Monument and Preserve.

This month, its efforts have brought the Triple Nickles (the spelling derives from old English) out of the clandestine corners of Oregon history.

The 555th “have never been recognized all these years, so this is really Oregon’s official recognition of the Triple Nickle story,” Roger Brandt, chair of the IVCDO, told The Skanner.

A fight on two fronts

In 1942, with the U.S. military still segregated, most African American soldiers were relegated to menial jobs with little expectation of achieving higher skilled posts. Between 1942 and 1943, some 5,000 Black troops were sent north to help build the Alaska Highway and install the companion Canol pipeline.

Even a Black lieutenant or sergeant was forced to live, eat and sleep in separate quarters from his White counterpart. The reality was a fight on two fronts – one against the enemy aboard and the other for civil rights at home.

At first largely an experiment – as the racist opinion of the time suggested African American soldiers lacked the courage to jump out of planes, said Brandt – the paratroop unit was formed towards the end of 1942 through a recommendation by the Advisory Committee on Negro Troop Policies. Constituted in February 1943, the 555th was initially formed as a company.

After several months of training in Fort Benning, Georgia and later in North Carolina, the unit was activated on November 25, 1944 as the 555th Parachute Infantry Battalion – all members were Black, from the commanding officer down to the privates.

At the open of 1945, the battalion was sent to the West Coast on a secret mission, known as Operation Firefly. The dangerous assignment was to exterminate some 9,000 balloons released by the Japanese, each carrying 4 to 5 incendiary bombs designed to ignite forest fires up and the down the coast.

“That whole episode of Oregon history was very much kept in secret,” said Brandt. “When the 555th came here, most people had no idea.”

The Triple Nickles were stationed in Pendleton and trained by the U.S. Forest Service, becoming the first military smokejumpers in U.S. history.

During the operation, the unit lost only one member. Medic Malvin L. Brown perished during a jump in the Siskiyou National Forest near Roseburg. The unsung hero is known as the first smokejumper to lose his life on a fire jump.

An unread chapter in Black history

On June 3, the Siskiyou Smokejumper Museum – which Brandt helped get on the national register of historic places – unveiled a 6-foot by 4-foot panel display, detailing the Triple Nickles’ untold chapter in Black history.

“You have to keep in mind that the 555th story really involves the whole West Coast – they were in Washington, Oregon and California – but this is an Oregon state historic marker,” said Brandt. 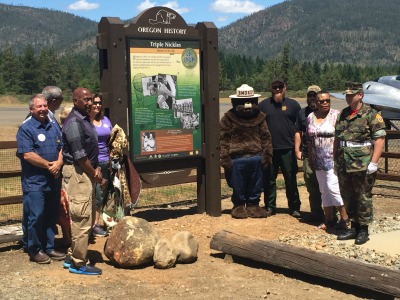 The 555th commemorative display. From left to right: Senator Herman Baertschiger, Dr. Robert Bartlett of the 555th Parachute Infantry Association, Ed Washington of Oregon Travel Information Council, a representative from Illinois Valley Community Development Fund, Smokey Bear, two representatives from the US Forest Service, Gwen Carr of the Oregon Black Pioneers, and a member of the Young Marines. (Photo: Zoe Morrison, Oregon Black Pioneers)Delivering a talk at the commemoration was Gwen Carr, board secretary of the Oregon Black Pioneers, which have recently opened a research file on the battalion.

“Our mission is to really tell the story of Blacks in Oregon and how they contribute to the development of historical Oregon,” Carr told The Skanner prior to the event. “Because of that, we’ve come in contact with a variety of largely untold stories. So the Triple Nickles is one of many stories people just don’t know about.”

Cave Junction Mayor, Daniel Dalegowski, presented the 555th Parachute Infantry Association with a plaque for the surviving members of the battalion. In a gesture of gratitude and respect, he also made an official apology on behalf of the community for the racism the 555th was met with during their service in Cave Junction.

Very few members of the 555th are alive today. In fact, Clarence Beavers is the only living original member who smokejumped into Oregon’s forest fires at the close of World War II.

The Skanner had the chance to speak with Triple Nickle Joseph Murchison, national president of 555th Parachute Infantry Association, from his home in Tampa, Fla.

In 1947, Murchison witnessed his all-Black battalion absorb into the 82nd Airborne Division, even before the army was officially desegregated on July 26, 1948. The melding of the two units meant Murchison and his fellow Nickles were among the first Black soldiers to serve alongside White soldiers.

“We were glad to go,” said Murchison of joining the 82nd. “For us it was a great thing to do. At that time, we were the first Black soldiers to integrate in the American army. Right away they started sending some of our people to stations that were mixed with White soldiers, and we were very happy about it.”