By Monica Foster of The Skanner
Published: 25 January 2006 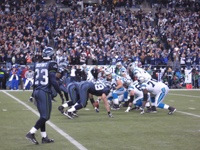 The dream has finally come true! The Seattle Seahawks claimed the NFC Championship with a 34-14 win over the Carolina Panthers Sunday at Qwest Field to advance to Super Bowl XL.


Qwest Field was deafening as the roar of the "12th Man" — Seattle's 67,837 fans — enveloped the stadium throughout the game, most standing the entire time.


TheSuper Bowl-bound Seahawks will face the Pittsburgh Steelers in Detroit on Sunday, Feb. 5, at Ford Field. The Steelers advanced by beating the Denver Broncos 34-17 for the AFC Championship title in Denver.


The Seahawks took control of the game early and neverlooked back. Quarterback Matt Hasselbeck completed 20 of 28 passes for 219 yards and two touchdowns.


"It was an incredible game to be a part of. I think with five or six minutes to go in the game we scored that touchdown and we felt the game was ours, the game was pretty much over at that point." Hasselbeck said.


"We knew what we had to do. Coach (Mike Holmgren) has been giving us the speech all year, saying we're not going to get the respect we feel we deserve until we go out and take it and win the whole thing." Stevens said.


All doubts about running back Shaun Alexander's health were erased after he rushed for 132 yards and two touchdowns after suffering a concussion last weekagainstthe Washington Redskins.


The Seahawk defense smothered the Panthers from the beginning of the game, holding them to only 212 yards and allowing just one offensive touchdown. Panthers quarterback Jake Delhomme, who had the highest passer rating in playoff history before kickoff, completed 15 of 35 passes for 196 yards and just one touchdown, a 47-yarder to Drew Carter. Carolina scored on a 59-yard punt return by wide receiver Steve Smith, who was also shut down by the dominant Seahawk defense and finished with five catches for 55 yards. The defense forced four Panther turnovers, and Delhomme was sacked twice by defensive tackle Rocky Bernard.


"This team is all about business, nobody's content on winning just the NFC Championship, everyone's more focused on winning the big bowl. I'm just so excited — it's something we've worked for all year long," Bernard said.


The stadium shook when interceptions were made by safeties Marquand Manuel and Michael Boulware, and linebacker Lofa Tatupu.


Thiswillbethe Seahawks' first Super Bowl appearance. After waiting 30 years, the Seahawks' faithful fans finally have their wish. Now, the ultimate goal is to bring home the Vince Lombardi Trophy to Seattle, and the Seahawks are focused on getting "just one more win."


Running back Maurice Morris, an Oregon Duck who has been a Seahawk for four years, talked about the difference in this year's team compared to last.


"The biggest difference this year is that word, 'team,' " Morris said. "Guys work well together — we vibe — and this city, the whole Pacific Northwest, definitely deserves a Super Bowl win."


Alexander, the league MVP, emphasized that the win was a team effort.


"It's huge because it's the Super Bowl," Alexander said. "It's the biggest game in the world and we know that. For me, I don't worry about my own platform or stats. I tell everybody, if I get nine yards and we win, I'm going to be really happy. I am probably going to cheer harder than anyone else. All we want to do is win."


Hasselbeck echoed the sentiments of his teammates when he expressed a sense of wonder after the win.


"I said it many times and I continue to say it, it's just a humbling experience just to know that of all the people that set out to play in this Super Bowl, we're on of the teams that gets to play." Hasselbeck said. "To have the opportunity to be called world champions is an incredible opportunity and we've worked so hard for it. It's amazing."