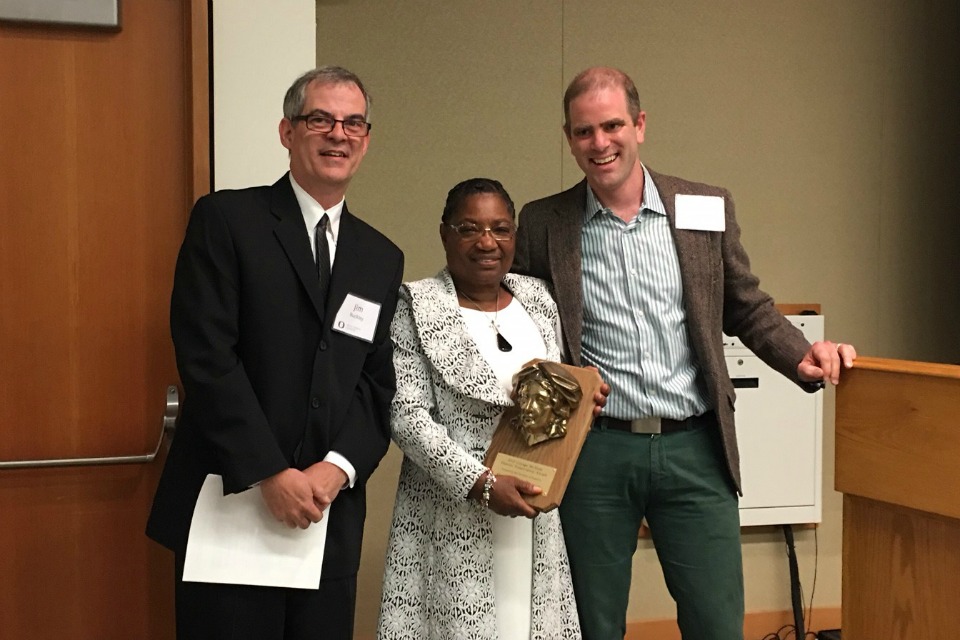 The award celebrates leaders who promote excellence in preservation practice and have made significant contributions to historic preservation in the state of Oregon.

The Oregon Black Pioneers are the first organization to receive the prestigious honor.

Former First Lady of Oregon Mary Oberst, who nominated the organization, wrote in her recommendation letter: “Oregon Black Pioneers is a group of trailblazers – illuminating corners of Oregon history that have never seen the light.”

George McMath is remembered as Portland’s “father of preservation” for his countless efforts in the preservation and restoration of the city’s historic buildings. During the 1960s and ‘70s, McMath drafted protection laws, surveyed Portland's architectural landscape, worked on numerous restoration projects, and sat as the chairman for several organizations and committees.

In 1981, he was elected into the American Institute of Architects’ College of Fellows for his leadership in the field of architectural preservation.

Recipients of the McMath Award work to build partnerships between professional and academic communities to further the field of preservation; the Oregon Black Pioneers have worked tirelessly on such endeavors.

Since the all-volunteer nonprofit was founded in 1993 in Salem, its researchers have been documenting areas around the state – historic sites, burials, buildings, and monuments – while educating professionals and the public alike on the contributions of Black Oregonians to the state’s history.

Furthermore, the Pioneers have continued to share their research and story gathering through lectures and presentations, exhibitions, publications and sponsored conferences.

“It is a prestigious award to come from your home state,” board president Willie Richardson told The Skanner. “For us, it was truly an honor in recognition of the work that we do, in trying to make the Oregon African American story more known and more inclusive in Oregon story.”

“You’re not dependent upon recognition when you are vested, committed and passionate about what you do,” she continued. “But at the same time, it’s nice for your work to be recognized and have value and importance placed on the story you have to tell.”

Among numerous educational projects, the group developed a resource booklet and study guide on Oregon’s Black history and distributed the materials throughout the Salem-Keizer school district.

Moreover, their work has been recognized by historic and public affairs organizations across Oregon, including American Legacy magazine, which granted the organization the Heritage Award in 2010; and the Marion County Historical Society which, in 2009, presented them with the David Duniway Award for Historic Preservation.

The Pioneers have also partnered with museums around the state, such as the Linn County Historical Museum, to highlight the stories of Oregon’s Black Pioneers. In addition, the group is currently working with The End of the Oregon Trail Museum, located in Oregon City, to add to the rich legacy of those Black pioneers who crossed the trail.

In 2013, the Pioneers launched the exhibition, “All Aboard: Railroading and Portland’s Black Community,” held at the Oregon Historical Society. The work showcased the lives of the African American community around Portland’s Union Station from the 1800s to 1940s.

Continuing in the spirit of storytelling, the Oregon Black Pioneers have once again teamed up with the Oregon Historical Society to present the massive exhibition, “Racing to Change: Oregon’s Civil Rights Years.”

Running from January to June 2018 at the Oregon History Museum, the exhibit will highlight the progress of Oregon’s Black residents during the civil rights movement of the 1960s and ‘70s.