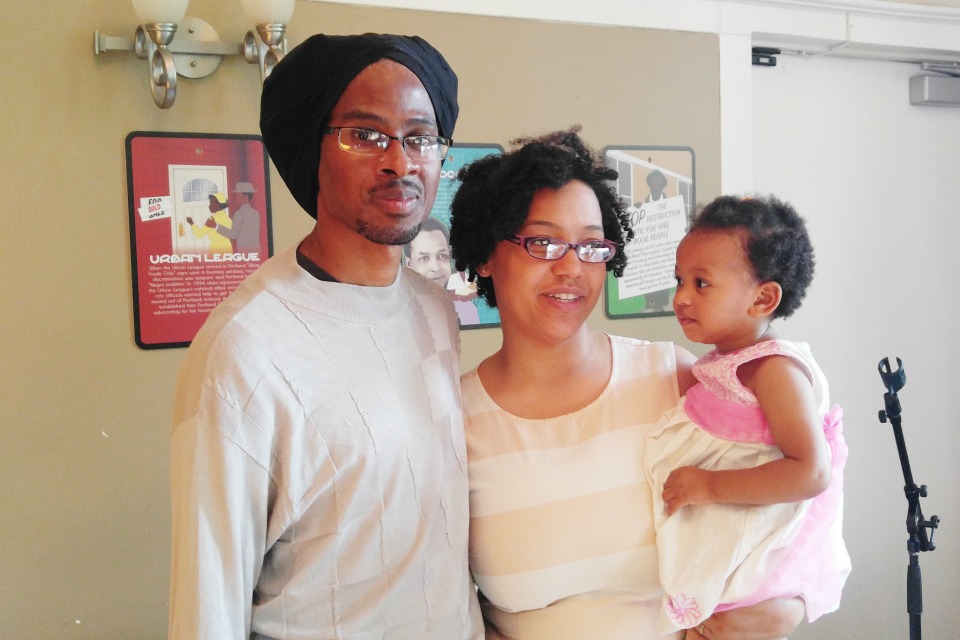 By Christen McCurdy | The Skanner News
Published: 25 May 2017

Both visual artists and designers, together they run two businesses – Soapbox Theory and Screw Loose Studios – that promote positive images of Black community and also provide design and printing services for events like funerals, receptions and weddings.

So when they heard there was an opportunity to honor the history of Portland’s African American community through art, Davis knew they had to take it on.

“When I first heard about it, I said, ‘I’d do it for free,’” Davis told a crowd of about 100 people at Billy Webb Elks Lodge Saturday afternoon.

The lodge is situated at the corner of North Tillamook and Williams, in the heart of what was once a thriving Black business district, and most in the crowd were longtime or former residents of the neighborhood, there by invitation from the Portland Bureau of Transportation to preview Davis and Talton Davis’ art project before the work is installed along Williams Avenue.

The couple responded to a request for proposals from the Regional Arts and Culture Commission for a public art project honoring the history of Black Portland. Davis initially envisioned sidewalk tiles – like the stars on the Hollywood Walk of Fame in Los Angeles. Talton Davis, his wife, suggested signs in the style of event posters.

The end project incorporates both ideas: it will consist of murals embedded into the sidewalk as well as signs with art and text describing events, prominent citizens and institutions central to the lives of Black Portlanders in the Albina neighborhood, particularly North Williams Avenue between Broadway and Killingsworth. PBOT organized Saturday’s event, inviting community members to preview the art – and stakeholders to discuss the history of the neighborhood and the project -- before it is publicly unveiled June 3. Members of the public are invited to participate in a walk to view the art, which leaves at noon from Dawson Park that day.

‘That was the spot’

One sign pays tribute to the Black Power movement of the 1960s and 1970s. Another describes the history of Jefferson High School. Some reference specific institutions, businesses or people, where others describe how broader concepts – like mentoring or worship – played out in the lives of Black Portlanders.

Talton Davis told the crowd the project places a particular emphasis on businesses in the area.

“We wanted to get into the economics of things,” she said.

For most of the 20th Century, Williams Avenue was the heart of Portland’s Black business district.

“I need to mention the corner of Williams and Russell, because that was the spot,” community member and business owner Paul Knauls, often called the “Mayor of Northeast Portland,” said Saturday after community members were invited to stand up and talk about their memories of the street.

The street was known, in the 1960s and ‘70s, for thriving nightlife – including Knauls’ Cotton Club – and was home to grocery stores, restaurants and soda fountains, a majority of which were Black-owned. Those who talked at the event described a small-town environment where no one locked their doors or bicycles and where everyone felt looked after and cared for.

Gahlena Maxey Easterly told The Skanner that redlining – overlapping practices by banks, real estate associations and the city that limited African Americans’ options for buying homes or doing business outside the Albina neighborhood – had the likely-unintended effect of creating a close-knit community where Black people of all economic classes lived side by side.

“That gave me an opportunity to see our people could do whatever we wanted to do,” Easterly told The Skanner.

Top down and after the fact

The art project was funded by PBOT and administered by the Regional Arts and Culture Council with a $100,000 grant from the $1.5 million-dollar Williams Safety Project – a street redesign project that was initially supposed to take six months and cost $370,000 dollars, but stretched to 18 months and cost $1.4 million for the street improvements. (The city found additional funding for the project through a state grant for innovation in safety.)

The project was a flashpoint for local discussions – and eventually, local and national media coverage – about transportation and gentrification in the Albina neighborhood.

Debora Leopold Hutchins served on the stakeholder advisory committee for what was then called the North Williams Avenue Traffic Safety Project. She said she was tapped to participate because she’d organized a group for African American female cyclists called Sistas Cyclists, but on getting involved she was just one of four people of color on the 14-person committee. Initial discussions seemed to focus solely on improving bike lanes on the street, but later expanded to larger, more sweeping infrastructure changes.

Maxey Easterly got involved after she saw a postcard at her mother’s house announcing a meeting soliciting public comments about the Williams project.

She went to the forum and told city officials, “This seems pretty after the fact.”

And that top-down approach – with little citizen input – was all too familiar to Leopold Hutchins, to Maxey Easterly and to other longtime residents of the neighborhood: the construction of Memorial Coliseum in 1960, Interstate 5 during the same period and, in the 1970s, Legacy Emmanuel’s expansion razed hundreds of homes in Albina, most occupied by Black families who were given little notice and no opportunity for input. Legacy later rolled back its plan for expansion, and much of the land razed – including the city block at Williams and Russell -- is currently vacant.

Portland State planning professor Karen Gibson, in her landmark study of the neighborhood, “Bleeding Albina,” details the way Portland’s African American community was “bled” not just through displacement but disinvestment in public services and amenities, including emergency services, street trees and street improvements. But as the demographics of the neighborhood began to change in the 1990s, the city began to invest in urban renewal.

That paved the way for gentrification – which included more investment in neighborhood infrastructure and a concern about safety longtime and former residents didn’t see in the 1980s and ‘90s.

“Once you remove all the Black people, all of a sudden it’s important to have crosswalks,” Maxey Easterly told The Skanner.

The stakeholder advisory committee eventually expanded to include more people of color – 26 people total – which looked at comprehensive improvements to the corridor. Nobody on the committee was 100 percent happy with the final outcome, Leopold Hutchins and Maxey Easterly said, but every change was something people on the committee could live with.

In 2014, the city formed the Committee to Honor the History of Williams Avenue, which sought to commemorate the street’s history as it underwent rapid redevelopment – including an influx of more affluent White residents, construction of luxury apartment buildings and the opening of dozens of new businesses -- in conjunction with the street improvements.

‘That’s for us to know our history’

Davis and Talton Davis’ aim is not to educate newcomers -- who may perceive Williams Avenue in 2017 as a revitalized slum rather than a thriving Black business district that was destroyed and rebuilt as a thriving, primarily White business district.

“The Honoring Williams committee got the money together but we lost so much in this. We lost the economics,” Davis told the crowd.

Residents who come back to the area and visit can see tributes to the neighborhood they remember – and Davis and Talton Davis will continue to collect stories and display them in multimedia format at a kiosk at North Cook and Williams streets.

Joyce Harris closed the event by saying it’s important that the work continue – and that residents’ stories be recorded and kept alive.

For more information about the Historic Black Williams Project, click here. To RSVP for the June 3 unveiling and walk, click here.