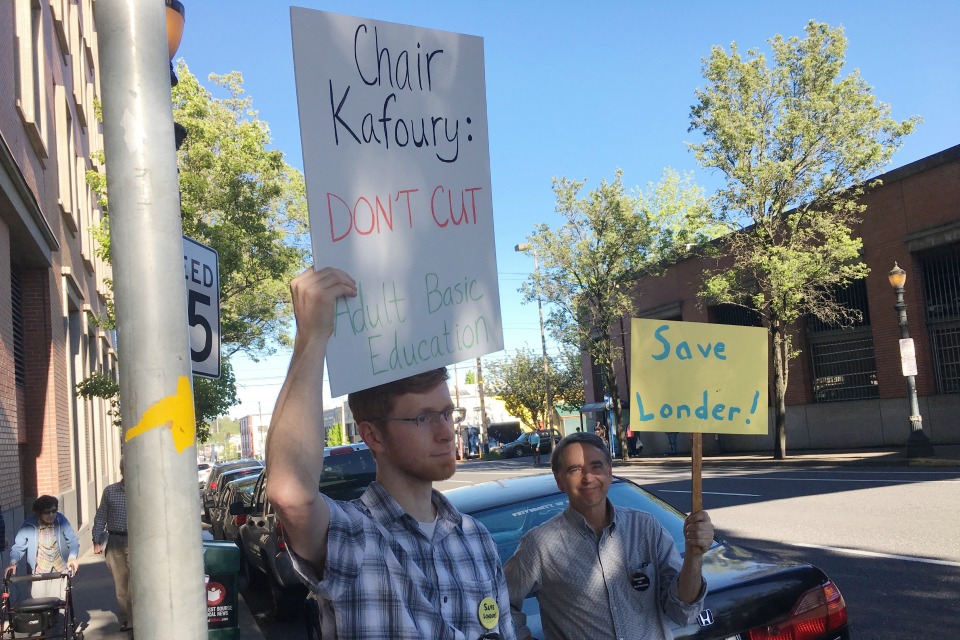 By Melanie Sevcenko | The Skanner News
Published: 11 May 2017

Rhonda McLeod battled drug addiction for 30 years. In 2009, as a felon and parolee, she came to the Londer Learning Center in southwest Portland to take care of some unfinished business.

McLeod had never received a high school education. Yet with the help of the LLC, she earned a General Educational Development degree, or GED, over the course of three years.

“I really struggled with math, and they were amazing,” McLeod said of the learning center’s teaching staff. “It didn’t matter how long it took me. They were there to guide me every step of the way.”

Today, McLeod has two jobs and will soon be graduating with an honors degree in criminal justice from Portland Community College.

Thousands of others in McLeod’s position having been coming to Londer since it was launched in 1993 by the late Multnomah County Circuit Court judge Donald H. Londer.

As a program of the Change Center at the Department of Community Justice, Londer is the only of its kind that offers free high school equivalency classes to adults in transition, many of whom come recommended by a parole or probation officer, or through a drug and alcohol treatment program.

But by the end of the month, the Londer Learning Center – which costs the department $600,000 per year and has provided some 1,200 GEDs – could be cut loose.

Due to the uncertainty of both state and county budgets, the DCJ is looking to cut close to $3 million from programs in the upcoming fiscal year.

“We think that the Londer Learning Center staff and the program is excellent, but when we’re in a budget cut situation, we have to look at what we’re here to do,” said Truls Neal, Deputy Director of the DCJ , adding that the department’s primary mission is community safety.

If the LLC gets cut, the county is relying on other resources to pick up the slack, such as PCC, which Neal said is looking to offer its GED program at a lower cost to parolees.

Furthermore, he added, PCC campuses are closer to where most parolees and probationers now live – in the East – not downtown where Londer is located.

But Londer supporters say adults with felony convictions or a history of addiction will be hard-pressed to come up with even low-cost tuition, let alone navigate a college campus.

Another resource is Southeast Works, a community career center that offers a free GED program to people under the age of 24. Yet that doesn’t serve the bulk of students who filter through Londer, most of who are well into their 30s and 40s, argues its backers.

Moreover, the majority of Londer’s students are people of color who are high-risk felons, meaning they often struggle with mental health issues, learning disabilities, homelessness, unemployment and poor social skills. Assessment results have consistently showed that 70 percent of students come to Londer with a reading level below 9th grade.

The center has worked to improve literacy while providing a stepping stone to higher education and employment. The unemployment rate for a high school drop-out in Multnomah County is 8 percent; for a GED graduate, it’s 5.6 percent.

In addition to the GED program, Londer also offers classes in computer coding and applications, job skills, and an apprenticeship prep program for construction trades.

Above all, advocates say the program helps keep felons from reoffending, underscoring the fact that incarceration uses more resources than education.

“I think it’s the best education facility for that section of the population in Portland,” said John Pioli, a volunteer tutor at Londer. “It seems ridiculous to cut something like that. It will probably never come back.”

Pioli, who taught at Portland Public Schools for 25 years, attended a budget hearing on May 3 where the county board reviewed Londer alongside additional programs that are facing elimination. Its backers – who have created a Facebook page and launched a petition at Change.org – came out to show support.

“When you hear the testimony of the people who got their GED and what they’re doing now with their employment opportunities, it’s amazing the transformation, how hopeful they are,” said Pioli. “I just feel like that group of people who really want to make a change in their life won’t have that, and it’ll make their progress that much more difficult.”

He said Londer’s dwindling GED graduation numbers have put the learning center on the county’s chopping block. Before the GED test was changed in 2014, Londer was graduating an average of 73 students per year. Since then, that number has plummeted to 23.

But poor GED graduation rates occurred statewide – not just at Londer – having dropped 84.7 percent between 2013 and 2014.

Even so, “We’re not getting as many clients referred to Londer,” said Neal at the DCJ. “The numbers keep going down.”

“It makes me sad,” said McLeod of Londer’s potential closure. “It was such as foundation for where I’m at in my life today. I wouldn’t have been able to go to college without it.”

A final vote will be held on May 25 to approve the budget. If the LLC loses the battle, it will be phased out by December.