No Right to Rest 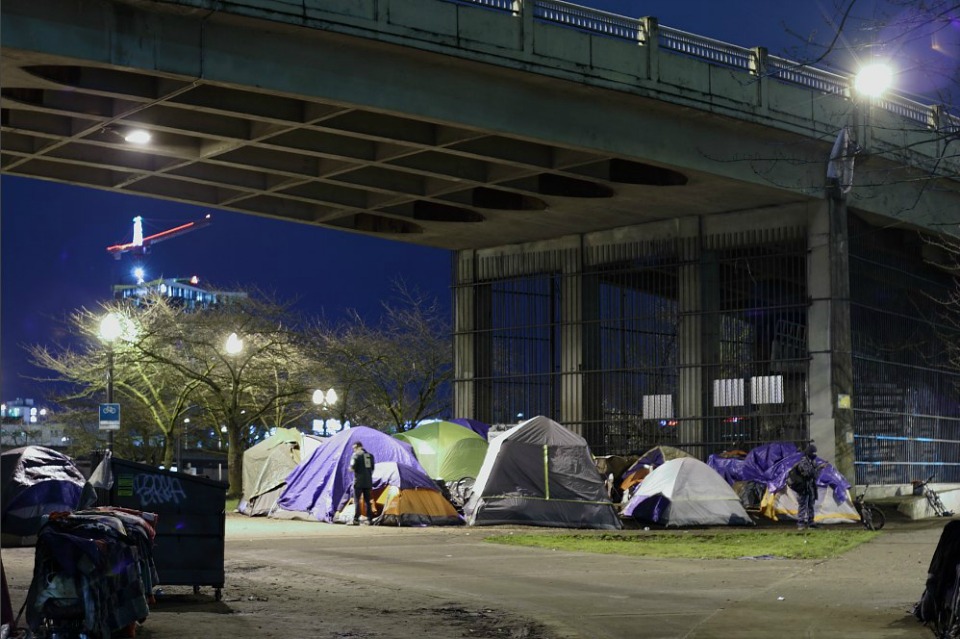 A bill to protect the rights of houseless people in public spaces died quietly last week, just on the heels of a report released by the ACLU of Oregon detailing the ways local governments effectively criminalize homelessness.

Legislators had until Friday to schedule a hearing for House Bill 2215, which advocates were calling the Right to Rest Act – but by the end of the day failed to do so. It sought to codify the rights to “use and move freely in public spaces without discrimination and time limitations that are based on housing status,” including the right right to rest, eat and worship (and to occupy legally parked vehicles).

The day before that deadline the ACLU of Oregon released a report, “Decriminalizing Homelessness: Why the Right to Rest is a High Road for Oregon,” detailing the extent to which certain activities have been criminalized by county and municipal governments throughout the state – in ways that target unhoused people disproportionately, including African Americans, who are much more likely to experience homelessness and to have adverse interactions with law enforcement.

The report analyzes a set of municipal anti-homeless codes in four categories: standing, sitting and resting in public places; sleeping, camping and lodging in public places, including vehicles; begging, panhandling and soliciting as well as loitering. It also includes excerpts from interviews conducted by the Western Regional Advocacy Project of 565 unhoused Oregonians. It found:

The report notes that future research should focus on enforcement patterns – something advocates say can be challenging to determine, given that there’s no uniform method for local municipalities to record police activity, and acquiring the necessary records can be expensive and time consuming.

“We have this long history of criminalizing homelessness, through vagrancy laws and that kind of thing, it’s been an issue since the inception of our state, maybe,” Heather Marek, the report’s author, told The Skanner.

Some of the laws the report studied have been on the books for decades, and some are newer – or have been dusted off recently. Several advocates who spoke with The Skanner noted a lineage between current pushes to restrict public activities and older laws that restrict who can be in public spaces: Jim Crow laws; California’s 1937 “anti-Okie law,” which made it illegal to “bring or assist in bringing” poor people to the state; California’s “ugly laws” passed in the 1860s, which made it illegal for people with “unsightly or disgusting” people to be in public; and the existence of “sundown towns” making it illegal for racial minorities to be present in a given locality after dark. (Historians say there were at least four sundown towns in Oregon.)

“It’s interesting looking historically, at this idea that we can regulate who is in or using public spaces based on whether or not people want to see them there,” Kimberly McCullough, ACLU of Oregon’s legislative director, told The Skanner.

Boden said in many cities, including San Francisco where WRAP is based, that push has to do with urban renewal in concert with the popularity of “broken windows theory” – the idea that any sign of urban disorder, including the presence of homeless people, will lead to crime.

“If you think that the Jim Crow laws are over, be a young Black kid in an area that used to be a ghetto and is now an urban renewal area,” Boden said. “You’re gonna get a jacked-up ticket for loitering.”

Critics, including Michelle Alexander, a legal scholar and the author of “The New Jim Crow,” say broken windows policing has led to an increase in racial disparities in law enforcement.

“Imagine if everybody had the enforcement on these laws, so if everybody got ticketed when they sat still or laid down,” he told The Skanner. “It’s totally based on disability, race and economic status. Be a person of color that’s mentally ill and homeless, you’re going to jail at some point.”

“Many people feel homelessness is kind of this intractable problem that has always been with us,” said Eric Tars, senior attorney for the National Law Center on Homelessness and Poverty. The population of chronically homeless people went up dramatically in the 1980s when funding for the department of Housing and Urban Development was cut in half. During the same period, mental institutions all over the country were closed, but policymakers didn’t create an adequate backup plan to house and treat people with mental illness.

“It’s difficult to deal with these things constructively. Once you decide you want to provide housing or wanting to provide shelter, you have to decide how you’re going to fund it,” Tars told The Skanner. “Criminalizing homelessness, you get to hide that budget in the criminal justice budget, but the costs are nevertheless greater.”

One of HB 2215’s cosponsors, Rep. Mitch Greenlick (D-Portland), said in an emailed statement he was unsurprised by its death “as it is not necessarily a very popular bill.”

McCullough said advocates “will be back” to keep pushing for change, and will continue to work on outreach and education.

“In this country we have decided criminalization is the answer to many of our problems when it actually doesn’t help,” McCullough said. “Getting people to change that mindset, I think is really difficult.”